“Into the Mists” is a new segment for this blog where I will chronicle my experiences playing through the new zones for Mists of Pandaria. I’ll give my thoughts on the lore, gameplay, and aesthetics of each one. I’ll particularly try to highlight smaller details that some people may miss in their rush to max level.

Be warned, though: there will be spoilers.

Naturally enough, I will begin with the starter zone for all Pandaren characters.

I didn’t have very high expectations for this zone. Aside from my general ambivalence about Mists of Pandaria, I knew it couldn’t top the absolutely stellar starting experiences for the Worgen and death knights, nor the epic starting zones for Guild Wars 2 I’ve been enjoying as of late.

While it is true that the Wandering Isle is no Gilneas, I did find myself pleasantly surprised by what an enjoyable zone it was.

Generally, I view as a failure any starting zone — or any zone at all, really — that isn’t non-stop, balls-to-the-walls epic action from beginning to end. I ask only one thing from Warcraft: that it be epic.

But yet, the Wandering Isle managed to be satisfying without being a spree of endless battles. It was a much smaller and more intimate story, but it was well-told, so it worked out. The zone is charming and whimsical without being overtly childish or ridiculous.

The thing that probably impressed me the most was how polished and seamless everything in the Wandering Isle felt. I’ve never seen such good use of phasing, NPC companions, and scripted events. The quests themselves were actually rather unimpressive — blah, go kill monkeys, whatever — but I hardly noticed because it all felt like such a seamless story.

Related to this, I enjoyed a lot of the little details inserted into the Wandering Isle. For example, the way that Shu goes off to frolic in the pond when you’re done questing with him, instead of just despawning. Or the lorewalkers teaching the class of children under the Dawning Span. If you just followed Ji across without pause, you missed a very neat little vignette on the history of the Isle, including a fully voiced song sang in what I presume is one of the Chinese languages. Cantonese, probably. 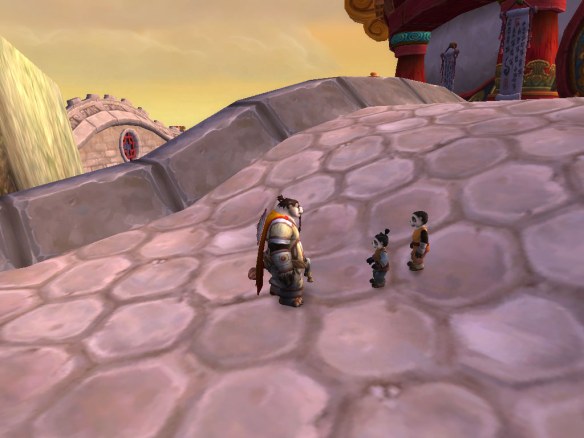 I was also surprised by how well they developed the Pandaren as a serious, legitimate culture. I wasn’t sure Blizzard would be able to shake free of their origins as an April Fools’ joke. Sure, Ji is a bit of a goof, and Jojo is mostly there for laughs, but on the whole, I felt I was playing with believable, well-rounded characters as opposed to the delightful but frivolous pun-dispensers Pandaren have traditionally been.

One final thing I enjoyed was the music. I keep saying that WoW’s soundtrack gets better every expansion, but I wasn’t sure they could top the amazing songs for Wrath of the Lich King and Cataclysm.

Sometimes, it’s nice to be wrong. Whatever Blizzard pays their soundtrack guys, it isn’t enough.

That said, the Wandering Isle had its flaws, as well. As is too often the case in WoW, there were certain aspects of the story that were never properly explained. If any reason was given for why we had to gather the elemental spirits in order to talk to Shen-zin Su, I missed it. Similarly, there’s no info on what the Onyx Serpent is or why it was causing trouble.

My biggest issue was probably the ending, when the Tushui and the Huojin choose to join the Alliance and the Horde. It seemed very abrupt and came somewhat out of the blue, even though I knew it was coming. While Ji and Aysa may have had their disagreements, I don’t see why they would suddenly decide to go to war with each other.

I was hoping for at least one good ideological debate between Ji and Aysa about the virtues and flaws of both factions and why they’d made their decisions. It almost felt like they just went, “Well, I wear blue, so I guess I’m with the Alliance. Ji likes red, so I guess he’s Horde.”

I suppose Blizzard probably assumed there was no point in making any particularly involved arguments for either faction, since most people will probably already be intimately familiar with both and know which they want to choose. To be fair, that’s probably a safe bet in most cases, but I still say this was a major missed opportunity to clearly define what the heart and soul of both factions are, and to allow us to see them through the fresh eyes of the Pandaren. 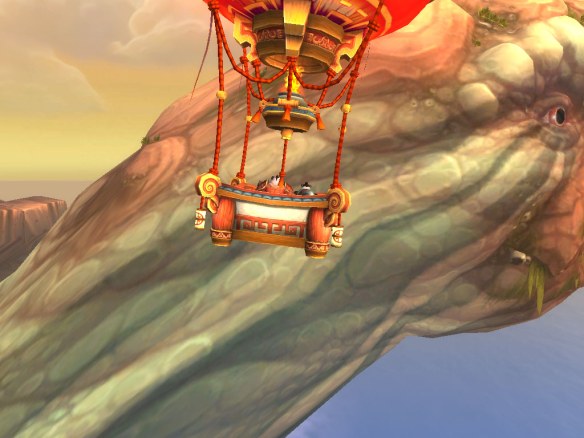 I’m disappointed in the wasted potential.

Still, I enjoyed the zone much more than I expected to. It may not be Gilneas or the Scarlet Enclave, but it probably beats any starting zone aside from those two.

Not really related to the design of the zone, but the first time I logged on to my panda was a perfect microcosm of what’s right and wrong with World of Warcraft. I was immediately greeted by the spectacular vistas of the Wandering Isle, and I stood in awe of the beautiful sights and enchanting soundtrack.

The mood was then totally killed by looking at the chat window, where people were having a lengthy and detailed discussion about how the difference between Alliance and Horde Pandaren is that the Horde pandas have larger genitals — both genders.

Since then, for the first time ever, I’ve been playing with the public chat channels turned off, and I’ve never enjoyed the game more.

My latest WhatMMO article is Top Six Little Touches. Seems an appropriate topic just now. Singing pandas did not make the list, however.

1 thought on “Into the Mists: The Wandering Isle”