Cry havoc, and let slip the pandas of war!

The mists have parted, and the lost continent of Pandaria is at last open to World of Warcraft players. 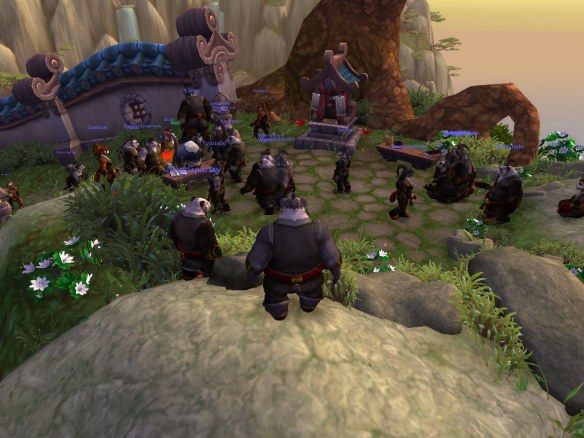 I’m still feeling my odd lack of excitement over this expansion. I guess I just don’t feel any connection to Pandaria. It’s a blank slate, and that’s good, but it also means the nostalgia that is my main reason for playing WoW is mainly absent. Still, I’ll give it a fair shake.

Not for a few days, though. I dislike crowds in any reality, so I’m not going to bother playing Mists of Pandaria until a couple of days have gone by. Once I do start playing, I will of course share all my thoughts on the Land of Pandas here on Superior Realities.

Review: The Ancient Blades: A Thief in the Night:

“A Thief in the Night” is the second book in David Chandler’s “The Ancient Blades” trilogy. You may recall I found the first book to be a thoroughly enjoyable, if somewhat simple-minded, adventure.

“A Thief in the Night” is largely in the same vein, though I feel a bit of the charm was lost this time.

Once again, it focuses on the trio of Malden, the silver-tongued thief; Sir Croy, the comically heroic knight of the sacred order of Ancient Blades; and Cythera, the sorceress/set-piece who anchors the love triangle. “A Thief in the Night” adds a fourth character to the mix: Morget, a barbarian warrior out to prove his manhood by slaying a terrible demon.

Morget is not technically a member of the Ancient Blades, but he does bear one of the magical demon-slaying swords that gives the order its name, and he seeks out Croy for assistance in defeating the demon. Croy immediately agrees because he’s Croy.

He then invites Malden, whom Croy hopes may become a new Ancient Blade. Malden reluctantly agrees after learning a sadistic assassin is on his trail. Cythera comes because… I guess she realized she doesn’t have a reason to exist without Croy and Malden mooning over her.

They pursue the demon to an ancient and supposedly abandoned Dwarven city that was also the site of the last stand of the Elves before humanity wiped them out. But, of course, a demon is not the worst thing in the ruin, and they find more than they bargained for.

As before, it’s a rollicking adventure with nary a dull moment. There’s a bit less humor than before, but “A Thief in the Night” does a lot to flesh out the “Ancient Blades” universe and make it seem like more of a legitimate fantasy epic.

Unfortunately, that greater level of seriousness is a double-edged sword (no pun intended). The humor was one of the main things that made the first book so charming, and without it, it’s harder to overlook the weak points of the story, like the fact that Croy is less a character and more a collection of adjectives.

Cythera is even worse. I didn’t like her before, but I’ve now developed a passionate dislike for her. She’s a feminist’s worst nightmare: an erratically emotional but largely passive and useless “character” whose existence is defined entirely by the men in her life. Now, I’m not really a feminist, being a guy and all, but I do live in the twenty-first century, and I expect better.

Cythera serves no purpose in the story but as a prize for Croy or Malden (depending on her mood) and as a minor plot device to deal with magical enemies. She has no thoughts or goals beyond which man she’ll settle down with.

Even her powers are passive. She can stand there and absorb magic, but she has no abilities that can be used proactively.

The handful of other women in the book are no better off. What I’m saying is that, if you’re a fan of strong women in fantasy, well… Go read Ian Irvine.

I also found myself missing the original setting, the Free City of Ness. David Chandler did an excellent job of developing Ness and the way its pervasive poverty informed Malden’s unique morality and worldview. It’s a shame that aspect of the world was left behind.

However, flaws aside, “A Thief in the Night” is still a thoroughly enjoyable piece of light reading. If you want to put your brain in neutral and lose yourself in a rousing adventure for a while, it’s a good option.