I checked out the series premiere for the new military/conspiracy thriller, Last Resort, the other night, my curiosity having been sparked by good online buzz for the show.

Certainly, it seemed like an intriguing concept. The show follows the crew of the USS Colorado, the most powerful nuclear submarine ever built. The story of the series kicks off when the Colorado receives orders to nuke Pakistan back to the stone age.

With no declaration of war or any apparent logic behind the order, the captain, Marcus Chaplin (played by Andre Braugher), calls up Washington to ask for confirmation of the order. This results in his being stricken of his command over the phone, and the order is then passed on to his first officer to let fly with the nukes.

The first officer also questions the order, and before they know it, the Colorado has been hit by another U.S. sub and left for dead at the bottom of the ocean.

Ultimately, the Colorado goes rogue, and Captain Chaplin sets himself up as the dictator of his own little island nation in the Indian Ocean, promising to nuke Washington if America so much as looks at him the wrong way.

As I said, it’s a premise with potential, but sadly, the execution was badly botched.

The first thing I noticed was how every character seemed to have come straight out of a catalog of over-used stereotypes. Oh, look, there’s Guy One Week from Retirement, and there’s Hardass from a Military Family, and here we have Creepy Mysterious Guy Who Describes in Detail How He’s Going to Kill You.

And it’s all downhill from there. The dialogue is poorly written and delivered in such a stilted manner that it seems as if even the actors are cringing at what they’ve been made to say.

The story is ripe with plot holes and implausibility. I’m no expert on military hardware, but I don’t think television is standard issue for a nuclear sub, and I really don’t think you can see reruns of Hannah Montana when you’re off the coast of Sri Lanka.

The absurdity of the show probably reaches its in peak during several scenes in which the Colorado crew speak to their families back home over the phone. We’re asked to believe that there is an all-consuming government conspiracy that can immediately detect when and where someone is talking to the Colorado but which lacks the ability to cut off these transmissions through any means save sending hired goons to literally, physically hang up the phones.

I’ll let Jean-Luc sum this up for me: 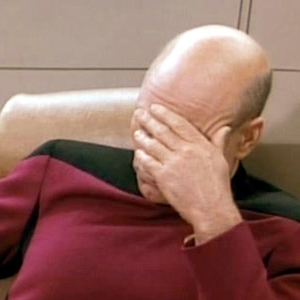 Last Resort isn’t totally without merit. I did quite enjoy the character of Captain Chaplin. He’s a unique mix of Bill Adama-esque fatherly leadership and Gaddafi-esque bat**** insanity.

I won’t spoil it, but there was a scene at the end with Creepy Guy that was very good. And it does have Bruce Davison in it, and that can’t be a bad thing.

Still, none of these are enough to save Last Resort, in my view. This will likely be my last post on it, as I have no plans to continue watching.