Lately there’s been an unusual excess of sci-fi and fantasy TV for me to watch. Unfortunately, it hasn’t all turned out to be must-see television, but it has been interesting enough for me to have a few thoughts to share.

I went into season four of iZombie with a fair bit of trepidation. While season three impressed out of the gate, over time it began to flag badly. The plot was extremely over-complicated and confusing, and most of the characters ended up going in dark directions that I didn’t care for. I was worried the show was losing its mojo.

However, I am pleased to report that, with only a few episodes left, season four has been kicking all of the ass.

iZombie is now a very different series from when it started. It’s gone from a very simple, lighthearted show with a very small focus to a much more intense drama where the very fate of humanity may hang in the balance.

It’s a big adjustment, but I deeply admire the writers for being courageous enough to shake things up so much, and for the most part, it’s paid off. Season four of iZombie still maintains much of the quirky charm and off the walls humour that made us all fall in love with the series, but it’s now a bigger, more powerful story as well.

I was initially skeptical of the show’s continued reliance on the case of the week formula — it was one of the things that dragged season three down — but they’ve mostly done a good job of making the cases tie into the greater narrative, and they haven’t been afraid to buck the formula when the situation calls for it.

Similarly, I didn’t at first enjoy the idea of bringing Angus back into the story, as it felt like his plot had been pretty conclusively wrapped up, but “Brother Love” has became one of the most spectacularly creepy yet gripping aspects of the series to date.

My one big complaint would be that the season’s attempts at social commentary have largely fallen flat. The conflict between zombies and humans is clearly intended to echo real world prejudices, but real world minorities aren’t an existential threat to the human race, whereas zombies are, so the anti-zombie perspective ends up far more sympathetic than the writers seem to want. Any message of tolerance is lost in translation.

It also feels like a little bit of a missed opportunity not to revisit Liv’s estranged family now that the zombified cat is out of the bag and they (presumably) know why she couldn’t save her brother, but it’s already such a packed season I can understand why they haven’t tried to cram that in on top of everything else.

Aside from that, season four of iZombie has been nearly flawless.

I was pleased to see the show has already been renewed for a final season. Even before the announcement, I was thinking to myself that the story seemed to have about one season left in it, so I think this will work out well.

On the other hand, Lucifer’s third season ended up being mostly a disappointment. It started out okay, and it had some good ideas, but a number of missteps dragged it down.

For one, it focused far too much on relationship angst. The conflict between Linda and Maze was utterly unnecessary, and the love triangle at the heart of the season was just terrible.

I hate love triangles at the best of times, and this one was made worse by how uninteresting Chloe continues to be. For a romantic arc to work, the love interest has to be appealing to the viewer, but Chloe just isn’t appealing at all. She’s dull, wooden, and lifeless. I can’t understand why anyone would want to be with her, let alone why two immortals would end up competing over her.

Also, the case of the week formula began to really bog things down. It’s always been the weakest element of Lucifer, but rather than de-emphasizing it as iZombie wisely has, Lucifer clung to it with an incredible fervour.

It became painfully predictable. Each week, a new murder where there’s no relevance to the meta-plot, the true culprit is blindingly obvious, and Lucifer makes it all about him in an incredibly childish manner.

Lucifer’s immature ways were amusing for a time, but by now, I was expecting the character to have evolved. Even a show as silly as Lucifer needs some character development. 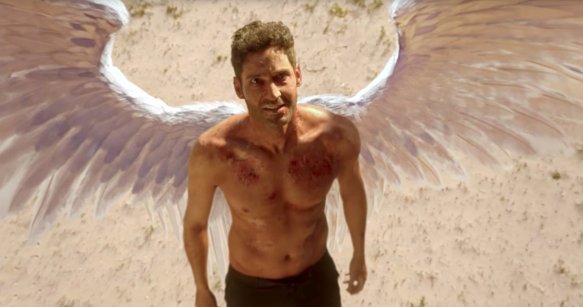 He does finally grow a bit by the end of the season, but only after a truly painful expanse of episodes where the series pretty much just chased its tail.

The frustrating thing is that season three had a lot going for it. “The Sinner Man” was a very interesting villain, and his arc had some memorable twists. There was potential there. Charlotte’s storyline this season was nothing short of brilliant, but it got largely ignored in favour of the petty angst that defined so much of season three.

Sadly, Lucifer has now been cancelled, which means season three may well be its last, barring a miracle pick-up by Netflix or some other network. Despite my criticism of season three, I would like to see it continue. As iZombie illustrates, one bad season doesn’t necessarily spell doom for a show, and the ending of season three did look set to move the show in a fresh direction.

Going in, I heard a lot of good buzz around Netflix’s Lost in Space reboot from people whom I respect. Therefore I was quite surprised by how boring it turned out to be.

I mean, it’s not terrible. I’ll probably watch the second season (which is already confirmed). But I can’t say I’m impressed.

For one thing, it is, to be blunt, pretty dumb at times. I never fully recovered from the brain-achingly silly pilot.

Seriously, guys, that’s not how ice works. At all. I don’t expect a lot of realism from my sci-fi, but when you’re screwing up something you could have tested in your home refrigerator…

The biggest problem, though, is that none of the characters feel real. Dr. Smith is so cartoonishly evil she seem ends up feeling more ridiculous than sinister. The rest of the cast (with one exception) is little better. They all feel forced and unreal.

I also thought the plot was undermined by how much of the show’s drama is dependent on the incompetence of the Robinson children (especially Will, who is just terrible on every level). Either they’re superhuman wiz kids who can serve as part of a deep space exploration mission, or they’re just kids who make mistakes, in which case they have no place on a mission like this. You can’t have it both ways, but that’s exactly what Lost in Space tries to do.

The only strong mark in the show’s favour — aside from the admittedly amazing production values — is Penny, who is awesome. Alone among all the cast, she feels like a real person. She acts pretty much exactly how I would expect a teenage girl to act. She’s precocious, but not superhuman, and relatable in a way the other children aren’t.

And her snark is delightful.

As I said, I’ll probably return for season two, but for me Lost in Space is very much in the “I’m watching this because there’s nothing better to do” category.