At long last, the journey is done. My nearly two year mission to complete every class story in World of Warcraft has reached its conclusion, with the last three now in the rear view.

Man. What am I doing with my life.

Rise of the mountain queen:

The trouble with the warrior campaign is it’s one of those stories that just doesn’t go anywhere. You spend all this time marshaling the armies of the Titanforged, and then… that’s it. You don’t actually do anything with your amazing immortal army. I like the subject matter, but there isn’t really a story here.

The only significant lore revelation to be found is learning what happens to the Kvaldir after Helya’s defeat, but while that’s nice to know, it’s honestly not a question I’d even thought to ask.

They do have a very pretty class hall, at least, and I was surprised how much I enjoyed playing arms spec. Going in, it sounded totally unappealing; I thought not having an active rage generator would make the spec incredibly slow. But it’s not like that at all. It’s quite quick, and it flows well. I wound up enjoying it better than fury, which I never would have expected.

This is why I try to test out so many different classes and builds. You never really know what you’ll like until you try it. 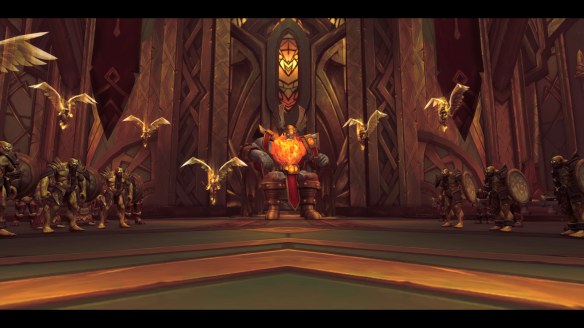 We had a bit of a last minute line-up change here. I had leveled up my Pandaren hunter, but that race never seemed to fit the class very well, so I decided to use my “free” 110 boost as a cheap alternative to a race-change. I spent really a disturbing amount of time agonizing over whether I wanted to be a Void Elf or a Nightborne, but while Void Elves are unquestionably the coolest looking race in the game right now, the vastly superior backstory of the Nightborne won out.

As for the campaign itself…

I’ve said before that Legion’s class campaigns don’t have enough content to work as standalones. The best campaigns are those that build upon existing lore and continue the stories of well-known characters.

The hunter campaign is entirely standalone, and as a result it’s possibly the dullest of all.

It’s undoubtedly a challenge to come up with a cohesive story for a class that has no real singular identity or established factions in-lore. I’m not sure I have a better idea for how to handle things. But the fact is that the Unseen Path, while potentially an interesting concept, is way too out of the blue and way too underdeveloped to be at all compelling. 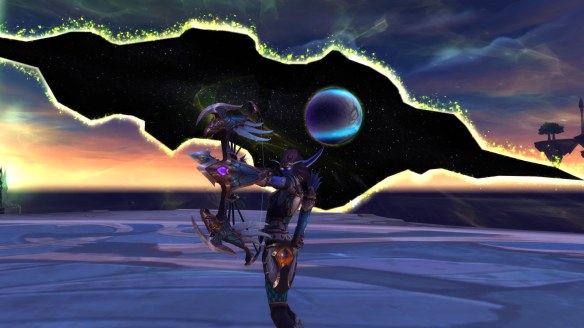 What’s equally sabotaging to the story but harder to explain is the fact the hunter campaign focuses almost entirely on unfamiliar characters the player isn’t going to have any investment in. There are more than a few memorable and interesting hunter characters in the lore, but for some reason they’re largely ignored by the campaign.

The hunter story isn’t quite as destructively dumb as the shaman campaign, but for sheer boredom, it takes the crown.

Also, I skipped recruiting a couple of followers because they required you to do Nesingwary’s quests in Highmountain. A long time ago, when I was a lowbie leveling through Stranglethorn, I swore to myself I would never do any more quests for that benighted, grind-loving Dwarf again, and I will not break that promise for anything.

The one piece of good news is that I did enjoy playing the class quite a bit. Marksmanship takes some getting used to, but once you get into the rhythm, it’s pretty satisfying. It does feel like playing a patient, master sniper. Beast mastery was also pretty fun, surprisingly. I wouldn’t play it solo, but in a group context, it’s not bad. More active than I expected.

Survival didn’t quite do it for me. It’s got some cool ideas and unusual mechanics, but it’s just not tuned well. You wind up so focus-starved.

The wilds call out: 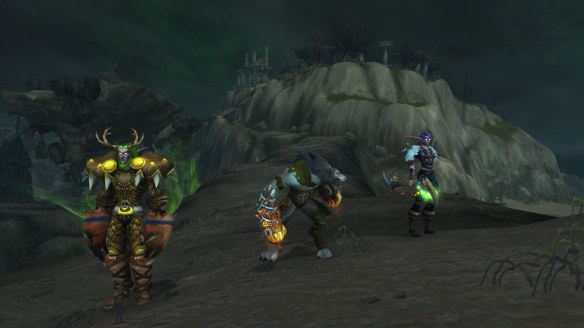 The druid story was a good note to end on. It’s not the best class campaign, but it is better than most. In stark contrast to the hunter campaign, it draws almost entirely on well established characters and plots. Maybe it’s still a pretty basic story on paper, but as a long-time Warcraft fan, I can’t deny the thrill of once again adventuring alongside the likes of Broll Bearmantle, Hamuul Runetotem, and Celestine of the Harvest.

Also, you get to relive the War of the Ancients in all its mad glory. Hells to the yes.

Man, I am scarred for life by Thisalee Crow’s new voice, though. It’s like they got the actresses for her and Valeera completely backwards.

Mechanically, I find druid a mixed bag. There’s no spec that I actively dislike, but nothing quite clicks, either. Balance and restoration just feel off in a way I can’t fully articulate, and feral still feels like playing a watered down rogue.

Guardian did grow on me a bit, though. If I wasn’t so burnt out now I might have spent some time playing guardian just for the hell of it even after I finished the campaign.

There’s also a certain sense of symmetry to finishing with my druid. He is not the first character I ever created — playable Worgen didn’t even exist back then — but he is reusing the name I gave to my original WoW character, who was a Night Elf priest. In that sense, I’ve ended as I started.

What a long, strange journey it’s been.

I admit to having mixed feelings. There’s a lot about this I enjoyed, but honestly, twelve class campaigns is a bit much. I’m glad I pushed myself to do more more than the stories of the classes I normally play, and it did give me a much more holistic view of the story of Legion, but I’m not sure doing every last one was really necessary.

If you’re wondering which are the must-plays, I’d say death knight, paladin, druid, and mage are the ones that feel important as a lore fan. Rogue and warlock were also a lot of fun, but I’m not sure they can be considered required.

Death knight wins as my overall favourite. Shaman was the worst.

This also means that I have now played every class and spec in World of Warcraft. I’d say the most enjoyable specs in each role right now are outlaw rogue for melee DPS, elemental shaman for ranged DPS, resto shaman for healing, and prot paladin for tanking.

Blizzard has done a very good job of improving class design across the board such that while there are more than a few specs I’m not that passionate about, there are very few that are actively unpleasant to play. Just holy paladin and demonology warlock, I’d say. Which is very sad to say, because those are both specs that have in the past been my favourite.

Of course, Battle for Azeroth will be changing everything again soon anyway…

Speaking of which, I think I must address my future relationship with World of Warcraft. I’m still not willing to say that I’m done with the game for good, but honestly? I have no plans to play anymore WoW right now.

The fact is pretty much all the stories I care about have been wrapped up, and the Mustering of Azeroth seems like a good note to end on. Maybe I’ll come back at some point, but for now, as impossible as it is to believe, I think I’m done with this game.

I’m still a Warcraft fan. All the stuff I used to love is stuff that I still love. I’ll always be a Blood Elf nut. I’ll always have fond memories of WoW and the previous games (not to mention the novels, comics, and movie). But at this point I think the franchise has given me all it can. I think it’s time to quit while I’m ahead.

Stay tuned, though, as I still have one or two more posts about all this up my sleeve…

I leave you now with a gallery of all twelve of my max level characters. A fine-looking bunch, if I do say so myself. You should all be impressed that only half of them are Elves.

3 thoughts on “The Mustering of Azeroth: An End at Last”