There’s a lot of comparison to be drawn between Overwatch and Heroes of the Storm. Both games from a company I love in genres I dislike. Both games that had me torn between excitement over what they could be and concern over whether I could get into the gameplay. 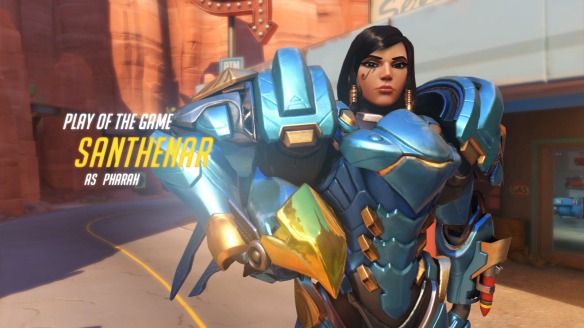 With Heroes, I was lucky enough to get into the alpha early, and there I was able to determine it was a game I enjoyed playing after all. With Overwatch, there’s been a lot more waiting, but I finally got an invite to this weekend’s stress test. I spent two days playing it heavily, trying to learn the game and get an impression of whether it’s something I want to invest in.

Sadly, it seems Overwatch has less in common with its MOBA cousin than I would have hoped.

Overwatch is a gorgeous game. The maps are beautiful, colourful, and detailed, and the character models are second to none. Most of the game’s cast seem to be in some competition to see who can be more instantly lovable and huggable. Is it Mei with her adorkable glasses, Tracer with her boundless enthusiasm, Bastion and its tweety bird, Lucio with his easy-going charm?

As with any Blizzard game, everything about Overwatch just overflows with colour, personality, and vibrancy. It’s a really good example of what I find so compelling about Blizzard. 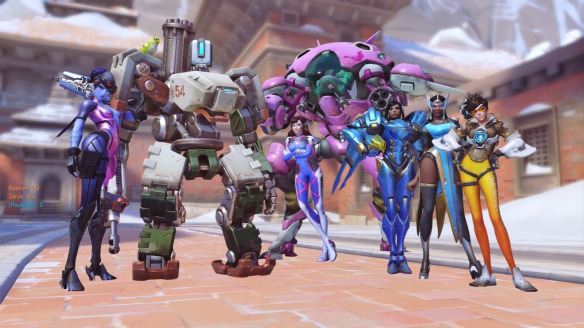 I was also impressed by the variety of playstyles the game’s many heroes offer. Shooters are at their core very simple games, but Blizzard still managed to make every character feel very distinct. Mercy and Lucio, for example, are both healers, but they play very differently.

The diversity of the cast also continues to impress me. You don’t realize just how homogeneous video game casts are until someone breaks the mould and offers a game that isn’t totally dominated by beefy white guys.

Playing Overwatch is a bit like living in Toronto: Everyone is a different colour, and half the time they’re speaking something other than English. It’s awesome. IDIC!

Even putting aside all high-minded liberal ideals, the diverse character design is refreshing purely for being a change of pace. How many action games let you play as an adorable Chinese climatologist?

Finally, I was pleasantly surprised to see no toxic behaviour whatsoever during the entire weekend. I think the game is so frenetic people don’t have time to nerd rage.

Going in, I was of the impression Overwatch, like other Blizzard games, was meant to be a fairly accessible game. Easy to learn, and welcoming to newbies, much like Heroes is. 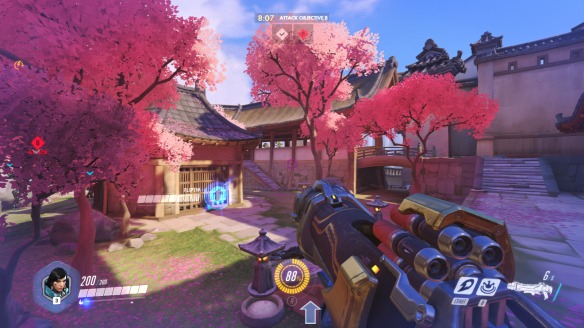 Overwatch’s learning curve is brutal. There’s a very basic tutorial which tells you nothing beyond the basic controls, and then you’re pretty much thrown into the deep end.

Yes, you can play versus AI, but even that can be fairly stressful if you have no experience with these types of games, and it still doesn’t do much to prepare you for play against other players. It’s better than nothing, but…

The lack of a good way to learn map layouts is one of the biggest problems. So much of the game is based around positioning and flanking, so knowing every map inside and out is crucial. But there’s no way to experience them outside of live matches, so it’s very much a baptism by fire.

It took me most of the two-day test to learn the map layouts well enough to play decently, and that was with the map pool limited to just three maps. I can only imagine how hard it would be in the full game.

While the variety of characters is one of the game’s biggest strengths, it also makes the game even harder to learn. Between the hero swapping mechanic and the fact you can’t pick your hero until you’re already matched with a team (who might have already picked all their heroes), you can’t just focus on learning on one character. You can’t have a “main” like you would in a MOBA or RPG. If your team needs a healer, you’re healing — like it or not. 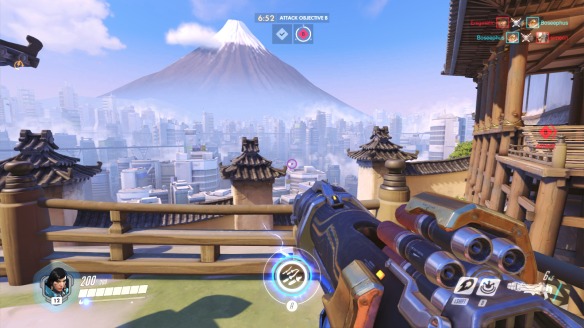 You need to learn at least four heroes (one of every role) just to reach the point where you’re not a liability to your team, and to actually be good, you’d need a solid mastery of at least a good chunk of the game’s twenty-one heroes (and counting).

If that sounds daunting, that’s because it is.

So needless to say I spent most of the weekend alternating between sucking and blowing.

At least I think I sucked. It’s actually hard to tell, because Overwatch gives you no adequate way to measure your own performance.

There’s a personal stats screen at the end of each match, but it’s just a spew of seemingly random statistics, overwhelming in its scale and completely lacking in any context. To make matters worse, you only have a very brief window to study it before being automatically hurled into the next match.

In other words, the stats page is completely useless.

Really makes me appreciate how clear and helpful Heroes’ stats screen is, even after all the ways Blizzard has made it worse since alpha. 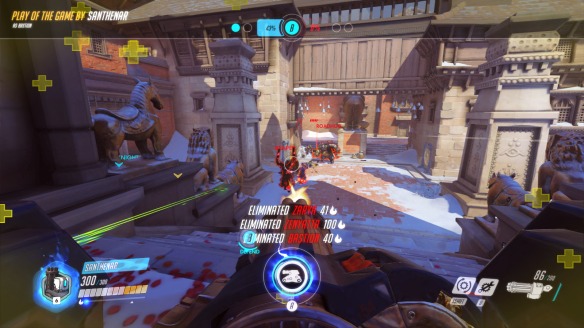 Finally, there’s just too much damage flying around in this game. Half the time, you’ll be dead before you even have a chance to register that you’re under attack, let alone react. That’s just not fun.

Now, by the end of the weekend, I did finally start getting the hang of things. I even earned Play of the Game once or twice, and I started enjoying myself quite a bit more. My final match featured an epic holdout where we managed to halt the enemy payload on Route 66 just inches from its destination, surviving for five full minutes to somehow win the match against all odds.

But it was an incredible effort to reach that point, and I’m a fast-learner. It’s also worth remembering that I’m a massive Blizzard fanboy who really wanted to enjoy Overwatch. If anyone else had made this game, I’d have given up within the first hour or two. This game is not at all friendly to people who aren’t already FPS pros.

I wasn’t able to try every character over the weekend, but I tried to sample as many as I could.

As I expected going in, Pharah turned out to be my overall favourite. I like that she rewards precision aiming while still being somewhat forgiving if you can’t perfectly nail every single shot. I also love her backstory, aesthetics, personality, and voice-overs. 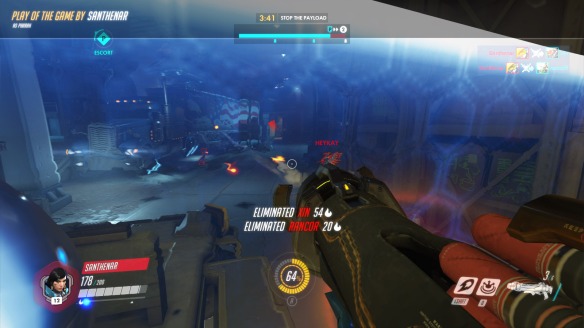 And she can fly. Nuff said.

Her ultimate is a bit frustrating, though. It seems to take a very long time to charge considering how easy it is to counter.

My picks for other roles were more surprising.

I expected Lucio to be my favourite support, but while I like his style, his gamelay turns out to be very dull (IMO). Zenyatta felt awkward to me, but much to my surprise, I fell in love with Mercy, enjoying her only slightly less than Pharah. She seems very powerful, I love how mobile she is, and her ultimate just feels awesome to use.

I also had a lot more success with Mercy than any other hero. She’s probably the only one I can say I’m actually good at. Probably a good hero for newbies.

Symmetra was just strange. The one time I played her against other players, we won handily, but I can’t tell if I contributed to that. It felt like I hardly did anything. I just ran around building turrets, and there’s no easy way to tell if those turrets are actually doing any good. 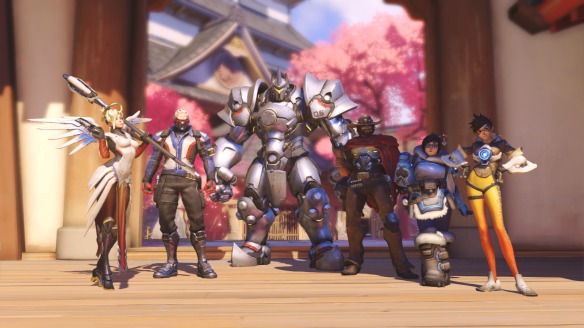 My first rare unlock was a Mercy victory pose. Clearly it was a sign.

My choice of tank was also a surprise. Zarya was the tank who most appealed to me on paper, but again, I found her quite dull in practice. Instead, D.Va won my affection. It’s just hard not to enjoy piloting a giant killbot.

I can’t seem to figure out how to play her outside of AI matches, though. I’m not sure I’m cut out to be a tank in this game.

Given my love of both sniper rifles and archery, you’d think I’d have taken to Hanzo or Widowmaker, but the game is just too frenetic for such precision play to be workable, at least for me.

I like Mei, but to be blunt, I’m really bad at her. Just can’t seem to figure out her playstyle.

So Bastion became my preferred defender. Not the most exciting hero around, but its positional play is interesting, and going all Saving Private Ryan on a charging enemy team is satisfying.

As for everyone’s favourite time-traveller, Tracer can be fun, but she’s just so insanely frenetic it makes my head spin. I think you need an IV drip of Red Bull to play her properly. Thank God I don’t get motion sickness. 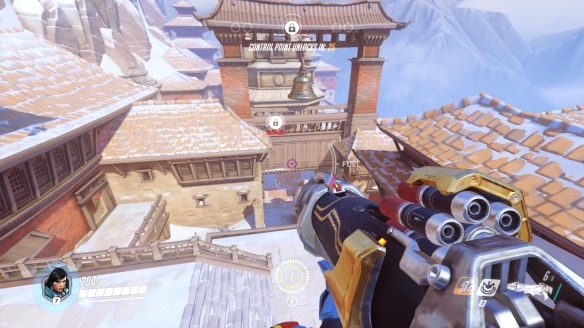 On the whole, Overwatch has disappointed me. There’s so much potential in this game, but it’s just so over-caffeinated, hard to learn, and unforgiving of any kind of mistake or weakness.

It’s a very repetitive game, too, with nowhere near enough variety in its game modes. I long for a single-player campaign, but even a decent co-op mode would work wonders.

I may play some more during open beta, but I don’t see myself buying the game at this point. It’s not that it’s not a fun game. For all my complaints, it does have a lot to like, and it can produce some awesome moments.

But is it fun enough to justify a ~$50 price tag? Definitely not.

Also, thanks to the limited map pool, I had this stuck in my head all weekend.