Ah, Diablo III. What a strange odyssey this game has had. Massive fiscal success, but panned by fans. It got so much right, and so much wrong. It evolved greatly, eventually solving many of the problems it launched with. Despite its stumbles and my ambivalence toward the Diablo franchise as a whole, I stuck with it through the ups and downs, and now, my patience has been rewarded. 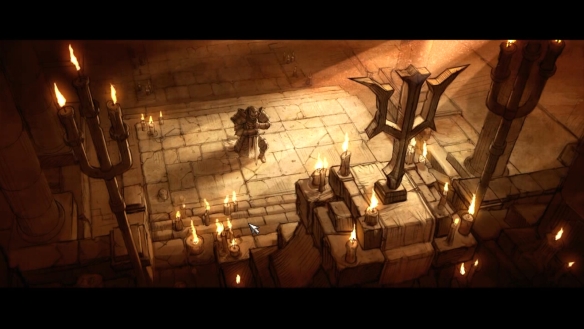 Diablo III has come into its own.

No one can stop death:

I enjoyed the story of the first game. It had some good twists, and an excellent cast of characters kept me emotionally invested. It did have its stumbles, though. Pacing, in particular, was wildly inconsistent, and some sections seemed to drag on forever with nothing particularly interesting happening.

Act V has all of the good of D3’s story, and none of the bad. Far from being sluggish in its pacing, it hits the ground running and continues at a breakneck pace, almost without pause.

There is so much going on in Act V it’s incredible. You can hardly go five paces without stumbling into an event, and there are conversations and pieces of lore everywhere.

The story of Reaper of Souls is suitably epic. The former archangel of wisdom, Malthael, has determined that humanity is the last and greatest bastion of demonic power left following the defeat of the seven Evils, and he has unleashed an army of angels and undead upon mankind to end the Eternal Conflict once and for all.

This expands on something that has been hinted at but not fully explored before in Diablo: The war between angels and demons is not a battle of good versus evil. It is simply a war between diametrically opposed forces, neither of which gives a damn about humans save as tools.

The message of Reaper of Souls is loud and clear: Angels are as much a threat to humanity as the forces of Hell.

What really impressed about the story, though, is how complex it is. There’s an underlying question of whether Malthael is right about humanity — that we are wicked creatures worthy of extinction. Throughout the story, you’ll be treated to examples of humanity at its very worst. When people should be uniting against the angels, they are turning on each other like rabid dogs.

It reminds me of some of the questions posed by Ron Moore’s Battlestar Galactica reboot, or my own World Spectrum novels. Is humanity worthy of survival?

At the risk of spoiling things a little, Act V does something I’ve wanted from a Blizzard expansion forever: It doesn’t end with everything wrapped up in a neat little package. Just the opposite — there’s quite a cliff-hanger. I think we can take another expansion as a certainty. 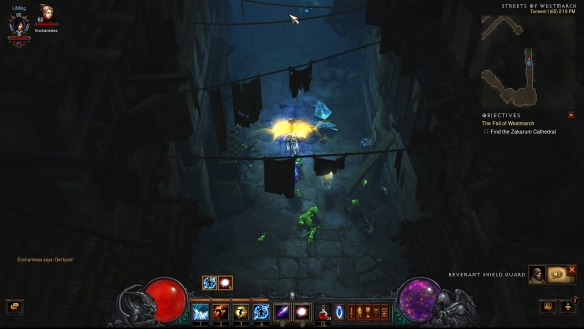 My only major complaint with the ending is the lack of one of Blizzard’s juicy, juicy cinematics. There’s just a brief cutscene. What is this? WoW?

Reaper of Souls also continues the character arcs of the followers and crafters, one of the best parts of vanilla D3. There are now Bioware-esque follower quests to further expand on the plots. I like the idea of these, and some offer some pretty major revelations about the characters, but if I must pick nits, they weren’t implemented very well. They appear very suddenly and are over too quickly.

Aesthetically, Act V is also an improvement over the original game. The environments are very gloomy and spooky and feel appropriate to the Diablo setting. I’ll never be a big fan of D3’s graphics, but the new areas make the best of them. The music is also quite lovely, and a bit less muted this time.

Act V is incredibly short, and I feel like I should be disappointed by that, but I can’t bring myself to be. It was a fantastic ride, however brief, and I wouldn’t change a thing.

Except the lack of a cinematic.

The crusade marches on!

Aside from new story, the thing that most interested me about Reaper of Souls was the addition of a new class, the crusader. I had fond memories of playing a paladin in Diablo II, and I was underwhelmed by the melee classes at launch, so I was eager to get my hands on this holy warrior.

I was not disappointed. The crusader far exceeded my expectations and is now my second favourite class in the game, only narrowly behind the wizard.

The crusader brings the brutal physicality one would expect from a melee class, but it also has the versatility that comes from a decent number of ranged options and magical abilities. It’s not one-dimensional.

I also quite like the class’s personality. He’s not at all the stuffy holy man one would expect. He’s got a very laid-back, wry air about him. His wit is amusing, and he comes across as an incredibly chill dude.

Plus, he’s voiced by Gideon Emery, who plays Fenris in Dragon Age II and Lor’themar Theron in World of Warcraft. He’s one of those guys I’d pay to hear read a menu.

And the gear for crusaders looks pretty awesome, too.

Most other changes that came with Reaper of Souls were already included in the 2.0 patch, which I’ve already talked about. I don’t wish to repeat myself other than to say that I greatly appreciate the ability to change difficulty settings on the fly now. No more need to wade through incredibly easy content on a low level character. I keep cranking the difficulty higher and higher for my crusader, and he’s leveling absurdly fast as a result. After finishing act one, he’s almost level forty — in my original play through, it took me the entire length of the game to get that high.

There’s a new crafter in the form of the mystic. Her ability to change stats on gear is a bit over-priced in terms of material costs, but it is nice to be able to turn the almost perfect piece of gear into the utterly perfect piece of gear. I prefer her cheap and easy to use transmogrification feature, though even that isn’t as exciting as it could be due to D3’s bland graphics and tiny character models.

But it is nice to be totally in control of your character’s appearance.

The other big feature is adventure mode, an alternative to repeatedly playing through the story. In adventure mode, players can travel to any part of the game with ease and complete randomized quests called bounties.

To be honest, adventure mode doesn’t feel much different from just hopping around using the change quest feature. The only real differences are streamlining the process and offering better rewards. Adventure mode is certainly a positive addition, but it’s far from the game-changer Blizzard’s billed it as.

The one somewhat interesting thing about adventure mode is that it can also unlock ultra-randomized dungeons called Nephalem Rifts. These can get pretty crazy with their combinations of enemies and locales from all across the game and epic boss fights.

I also appreciate that they did provide a certain degree of story justification for adventure mode. It’s not exactly a crucial part of the plot, but it’s not just, “Go kill things for phat lewt,” either. That’s a nice touch.

Overall rating: 9/10 Diablo III has had more than its fair share of stumbles, but with Reaper of Souls, it’s finally reached its full potential.

Now I’m worried they’ve set the bar too high for the next expansion.