The World Spectrum series is finished (for now, anyway). But perhaps some of you are still hungry for more — I hope you are; shows I’ve done my job right. If that’s the case, you might want to check out some other books with similar concepts and themes to my science fantasy epics.

This is one of the the nice things about being an author. I’m not really in direct competition with other writers. You’ve got plenty of time to read books from a variety of people.

The following is a list of books I’ve greatly enjoyed that also are similar to and/or served as inspiration for my World Spectrum novels.

And if you’re already fan of some or all of these but haven’t yet read the World Spectrum, maybe this is a sign you should give it a try. It’s free, after all.

Ian Irvine is my favourite modern writer, and my literary idol. I can only aspire to one day be half the writer he is, and he is one of my greatest sources of inspiration.

If you read his Three Worlds Cycle, you’ll immediately notice similarities to my own work. A major plot element of the first quartet, The View From the Mirror, is a mysterious magical barrier separating the three worlds. The worlds themselves bear a certain resemblance to mine, as well: an Earth-like world where most of the action takes place (Barria/Santhenar), an icy world (Sy’om/Aachan), and a heavily forested world (Tyzu/Tallallame).

Irvine spent most of his life as a scientist, and that shows in his writing. He has a very realistic and logical approach to fantasy that’s routed more in science than mysticism. I’m a huge fan of this as it makes the universe feel much more grounded and believable, without sacrificing the wonder and exoticism of high fantasy, and I tried to replicate this as much as possible with the World Spectrum novels.

The second quartet of the Three Worlds Cycle, The Well of Echoes, takes the science fantasy angle even further with many wondrous and terrible magical devices. Most notably, the massive war machines known as Clankers were a major inspiration for my own Automatons.

The Dragon Age by James Maxey:

When I think of science fantasy, James Maxey’s Dragon Age series is always one of the first thing that comes to mind. The reason why constitutes something of a spoiler, so if you like to go into books fresh, just skip ahead to the next entry on this list and take my word for it that the series is worth reading.

The Dragon Age novels start out seeming like fairly standard high fantasy fare. They are set in a world of dragons and magicians, where ordinary humans are nothing but slaves and prey.

But it is eventually revealed that it is not a fantasy setting at all, but a work of post-apocalyptic sci-fi. The dragons are the result of a Jurassic Park-esque genetic engineering experiment gone horribly wrong, and the “magic” is actually nano-technology left over from the fallen human civilization.

It makes for a pretty interesting setting, and it gets pretty strange (in a good way) as the series goes on and the sci-fi angle becomes more pronounced. If you’re someone who likes to mix and match sci-fi and fantasy, this a series worth your time.

Shadows of the Apt by Adrian Tchaikovsky:

You want a good steampunk story with fantasy elements? You want Shadows of the Apt. It’s just that simple.

This is another series that interestingly blends the scientific with the fantastical. Much of the story, especially in the early novels, focuses on steampunk technologies and fictional science. Most of the main characters don’t even believe in magic.

But as the series advances, more and more elements of the fantastical slip in. Unlike Ian Irvine’s realistic take on magic, Tchaikovsky’s magic is rooted in mysticism and the unknowable. It’s a stark contrast to the gritty technology of the rest of the setting, and the utterly disparate forces of science and magic make for a very compelling and unusual universe.

Genesis of Shannara by Terry Brooks:

Terry Brooks’ massive Shannara series is in many ways a typical high fantasy, but it does have one major twist. Rather than being set in an alternate world or the distant past, it’s actually set on Earth in the distant future. For the most part, this is a background element of the story that doesn’t come up much, but the Genesis of Shannara trilogy puts the idea front and center. 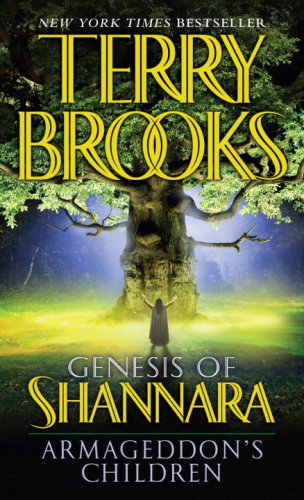 Genesis of Shannara tells the story of how the modern world we know was destroyed, and how it gave birth to the fantastical world of the other Shannara books. It’s a brilliant genre mash-up combining elements of urban fantasy, post-apocalyptic sci-fi, and high fantasy.

This is a series that has pretty much everything. Burned out cities. Hordes of zombie-like Once-men. Mutants. Two kinds of demons. Elves. Magical artifacts. A wizard driving a weaponized Hummer. A spirit dog named after the most Sith-like vice president in U.S. history.

A combination of so many disparate elements might seem scattered or ridiculous, but somehow, Terry Brooks makes it all work together beautifully, without ever forgetting the importance of emotion or character.

While Genesis of Shannara is both a prequel to the other Shannara novels and a sequel to Brooks’ Word and Void novels, you don’t need much knowledge of either series to appreciate it. Even if you’ve never read anything by Terry Brooks before, I’d highly recommend this series.