The alpha for Heroes of the Storm, Blizzard’s new MOBA, is upon us… though I suppose this is really more of a closed beta.

Honestly, the meanings of these things have become so muddled that I don’t what anything means anymore. Alpha is now beta. Beta is now soft launch. I suppose by traditional terms, Heroes would be in closed beta. But they’re already accepting real money payments!

But I’m already off-topic. My point is that Heroes* has been in the news and on my mind a lot lately. I’ve been combing Heroes Nexus for news, dutifully checking my email for an alpha invite that may never come, and watching HuskyStarCraft play matches. Through it all, I find myself filled with excitement, but it’s clouded by a lot of worry.

*(I can’t bring myself to call it HotS, because that still means “Heart of the Swarm” in my mind.)

I’m not worried because it isn’t shaping up to be a good game. Quite the opposite. It looks to be a major improvement over past MOBAs. Many of the heroes look fun to play, the map objectives make battles much more varied and interesting, and I much prefer the talent system to items.

There are a few areas it could probably be improved — the matches still look to be pretty damn long — but on the whole, it’s looking to be a very fun game. 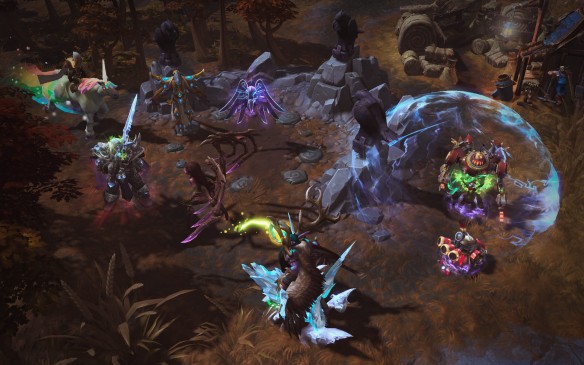 But all throughout, there’s this nagging voice in my head saying, “Tyler, you don’t like these kind of games. You never have, and you never will.”

It’s true. Competitive gaming has never really been able to hold my attention. I consider this a personality flaw on my part.

In the abstract, I love the idea of competitive gaming. It’s a test of wits and reflexes between even opponents. It’s a contest of the mind. I have great admiration for what competitive gamers are capable of, and it’s one of the main reasons I enjoy watching professional StarCraft matches.

But when I try it myself, it quickly becomes more stressful than anything. I tend to be pretty bad at such things, and I lack the patience to wade through loss after loss and improve. Even if I did get good, these things are designed so you always lose at least half the time, and I find that pretty demoralizing.

Competing against other people adds an extra layer of humiliation, as well, and being on a team makes it even worse. It feels terrible to drag down your team with your noobishness — or to have someone else drag you down. 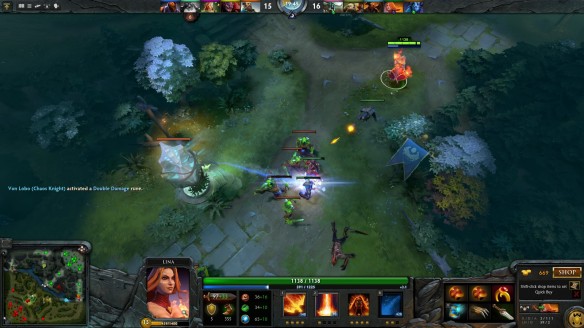 Then there are issues more specific to the MOBA genre. Their communities are infamously toxic and unforgiving. I didn’t find the community in DOTA 2 any worse than what you’d find in your average MMO battleground, but that still puts it somewhere between “terrible” and “I don’t want to live on this planet anymore.”

And World of Warcraft has clearly shown that Blizzard doesn’t really care about the quality of their in-game communities, so I doubt they’ll do much to curtail such behaviour.

There’s no real story, either. It’s not even remotely canon for the lore of any of Blizzard’s universes, and nearly the entire game revolves around PvP. Recent history has shown that it’s all but impossible for me to maintain long-term interest in a game without a story to keep me hooked in.

If this were any other game, I’d have already written it off as not to my taste, as I do all other MOBAs.

But damn it, it just seems so cool. I’ve been a Blizzard fan all my life, and throwing all of the greatest heroes and villains from all their games into a ring and forcing them to fight is the stuff of my darkest, nerdiest dreams. It’s like an even more ridiculously awesome version of Stadium Love.

The idea of Illidan plying his demon-hunting skills on Diablo, of Tassadar laying the psionic smackdown on Arthas, of Nova sniping Tyrael… It just fills me with child-like glee.

I love the art style, too. It makes me painfully nostalgic for Warcraft III, and I wish more than ever that Blizzard would get to work on Warcraft IV.

So I’m filled with excitement for Heroes of the Storm, and I can’t wait to get my hands on it, but I fear I’m only setting myself up for disappointment. This is exactly the sort of game I don’t like. Maybe Heroes will be good enough to force me out of my comfort zone, but somehow, I doubt it.

My latest article for ADANAI takes a look at how Warcraft and Mass Effect may be the first in a new generation of quality films based on video games.

I know I couldn’t be more excited for the Warcraft movie. Having watched Vikings, I’ve come to the conclusion Travis Fimmel is a great actor, and I think he’ll do very well in the film. His intensity is well-suited to the Warcraft universe.

4 thoughts on “Heroes of the Storm: Where Anticipation Meets Concern + New Article”