After many delays — both on my end and the publishers’ — I have finally gotten around to finishing the last two books of Ian Irvine’s The Gates of Good and Evil quartet, The Perilous Tower and The Sapphire Gate. The Gates of Good and Evil is itself the latest continuation of the sprawling Three Worlds Cycle that began with The View from the Mirror.

Ian Irvine is one of my favourite authors, and I’ve loved the Three Worlds setting since I was a teenager, but this latest series underwhelmed me in the first two books. Sadly, that remains true for the final two, as well.

Irvine remains a master of action and pacing. The books are still page-turners, and there are some genuinely thrilling and epic moments, but overall, the story fails to reach the heights achieved by previous books in the saga.

As with the first two entries in Gates of Good and Evil, the villains remain one of the most fundamental flaws. The Merdrun simply aren’t compelling. They’re just unusually nasty humans. They’re too evil to have much nuance, but too mundane to have much flavour.

There is an attempt made to add some depth to them via a new character through which we can see the Merdrun’s point of view on things, and it helps, but it doesn’t really do enough to change their fundamentally uninspiring nature.

I also continue to be disappointed by how much Maigraith has been squandered as a character. The entire Three Worlds saga has been building her up into this epic, terrifying threat, and in this series she’s just… petty and pathetic. She does get a halfway decent conclusion to her story, but overall I’d still consider her treatment in this quartet to be an incredible disappointment — perhaps the greatest error Irvine has made with this entire franchise.

In theory the most exciting part of these last two books is that (thanks to some time travel shenanigans) they bring back nearly every major protagonist from the entire Three Worlds Cycle. This should make for a really epic experience, and it has its moments, but there’s just too many characters and not enough for them to do. Many iconic figures are squandered as irrelevant cameos.

Most egregiously, Nish — arguably the greatest and most memorable hero of the saga — does literally nothing. He could have been removed from the story entirely, and nothing would have changed. He’s just… there.

On the plus side, we do get a lot more time with Xervish Flydd, who never fails to be entertaining. Gods I love that cranky old bastard.

In a vacuum, the Gates of Good and Evil is not a bad series. It’s got some definite rough edges, but I’ve read and enjoyed worse. On its own merits, it’s a decent fantasy action-adventure.

But compared to the quality of the previous entries in the Three Worlds Cycle, and considering all the potential of bringing together plots and characters from the entire saga to date, it’s hard to see it as anything but a disappointment. It pains me to say it, but it’s true. It’s not that it’s bad; it’s just that it could have been so much better.

Confusingly, the ending to book four declares it the conclusion of the Three Worlds Cycle, but Irvine has already announced his intention to write another series (albeit an interquel and thus not technically a continuation, I suppose), and one of the final chapters foreshadows the return of a major villain. So… I guess we’ll have to wait and see.

I’ve got a pair of book reviews for you today. First up…

Welcome to Night Vale: It Devours

I won’t lie: As much as I love Night Vale, I found this book pretty disappointing.

It Devours follows one of Carlos’ scientists, Nilanjana Sikdar, as she investigates strange occurrences that may be connected to the Joyous Congregation of the Smiling God. This investigation is complicated by a budding attraction between Nilanjana and Darryl Ramirez, one of of the Congregation’s most devout members.

Seems like it could be an interesting story, but… well, it really isn’t. The writers are clearly trying to make a point about the dangers of blind faith, which is admirable, but it’s extremely ham-fisted and unsubtle. It’s not so much a story with a message as it is a message with a story half-heartedly built around it.

It doesn’t help that the main characters are fairly weak. I don’t find Nilanjana or Darryl to be especially likable or interesting characters individually, and worse still their budding romance feels completely forced. The two characters have nothing in common and no chemistry whatsoever, and I was never really clear on why they even liked each other.

The book isn’t a complete waste. It is written with that trademark Night Vale wit and charm, and many of the background characters are memorable. I particularly enjoyed Nilanjana’s coworker who devoted her entire career to disapproving of potatoes.

Carlos also gets a fairly meaty supporting role, and we learn a lot about what makes him tick. I read in the YouTube comments recently there’s a section of the fanbase that has the head canon Carlos is on the autism spectrum, and having read It Devours, I can definitely see why.

Still, despite highlights like that, this is a book I’d have trouble recommending, even to serious fans of the podcast.

The Black Company, Port of Shadows: 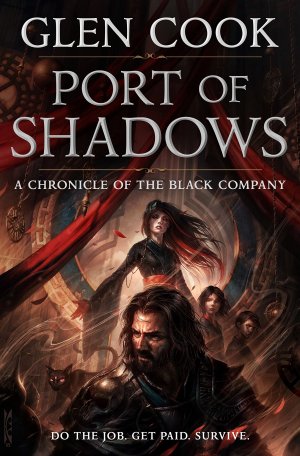 Man, who the hell expected a new Black Company book after all this time?

What makes it even weirder is that this isn’t a continuation of the story. It’s an interquel, dubbed “book 1.5”.

That kind of has “unnecessary money grab” written all over it, so I didn’t exactly expect much from Port of Shadows. But it ended up impressing me as much as It Devours disappointed.

Following the battle at Charm, the Black Company has been given a cushy garrison assignment at the city of Aloe. An investigation into a young woman with a mysterious connection to the Lady threatens to disrupt their peace, and the arrival of a new Taken throws Croaker’s life into disarray.

Of course, it is a bit of an awkward fit into existing continuity, though attempts are made to explain the inconsistency. It’s not perfect, but at the end of the day I believe continuity should serve the story rather than the other way around, so I can let it slide.

Reading this, I reflected on how strange it is that I enjoy the Black Company books as much as I do. In theory they’re everything I profess to hate in the fantasy genre. They’re ugly, bleak, cynical books in a low magic setting with no heroes worth rooting for.

I can only say what I’ve always said: I love the way they’re written. The prose is steeped in dry wit and gallows humour, and it makes what would otherwise be an appallingly unpleasant story into a delightful page-turner.

Though I must admit I do worry what it says about me that I just used the word “delightful” to describe a book that features the phrase “consensual necrophilia” as a major plot point.

Anyway, as with the series as a whole, I struggle to explain precisely what it is I enjoyed so much about Port of Shadows, beyond the clever prose. I suppose there is a good mystery here; wanting to uncover what’s really happening is definitely part of what makes it such a page-turner.

I’ll also say that it feels a bit like the later Black Company books in that it presents a softer side of the Company (I use the term loosely) and shows them as being… well, if not the good guys, then at least the lesser of two evils relative to the forces they’re opposing. It does make the whole thing a bit more palatable compared to those times when the Company is just the bad guys.

Going in, I was afraid Port of Shadows was an unnecessary addition to a completed series, and arguably it is, but I wound up enjoying it thoroughly despite that.