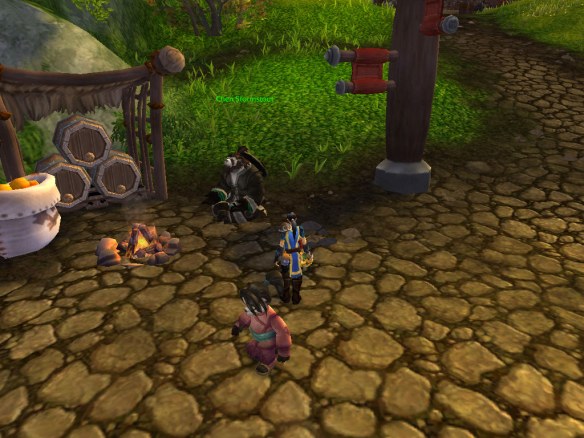 I continue my spoilerific journey into the lost continent of Pandaria. Now, my characters have split up, with my warlock venturing into the steamy jungles of Krasarang and my rogue riding across the sun-soaked fields of the Valley.

It should be noted that I have not seen the climax to both zones because I split my characters up. I think it’s dumb you need to do both zones on a single character to get the full story. 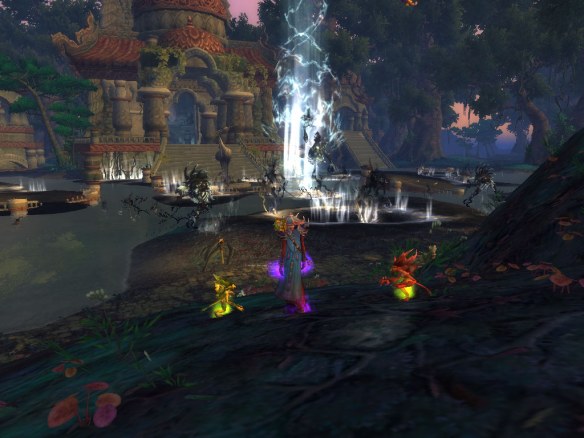 This was an interesting zone, I thought. I wasn’t a big fan of the zone aesthetically — too muddy and claustrophobic — and it didn’t have any “this is Warcraft at its best” moments like the Jade Forest did, but I found it a good, solid quest experience.

I liked the continuation of the Sha arc, and I especially loved the concept of a place so choked by despair that the land itself is literally weeping. Certainly puts another nail in the coffin of the “pandas are for kiddies” argument.

All in all, the Sha storyline is turning out better than I’d hoped, and it’s an interesting twist to see us players as the villains. If I had one niggling complaint, it’s that I wish the game would put more effort into drawing the connection between our actions and what’s happening to Pandaria. We’ve done a horrible, horrible thing. The game should be doing everything possible to lay the guilt trip on us.

I also liked the arc with the Sunwalker and his pregnant wife. Warcraft tends to focus on grand, universal conflicts, and I like that, but I also very much appreciate it when they can bring things down to earth with more humble problems. Makes the world feel more real.

And the ending is just heart-breaking. That’s a quest that will stick with me for a long time.

Mists of Pandaria’s questing hasn’t brought the major leap forward in quality we saw in Cataclysm and Wrath, but if there’s one thing I can point to that MoP is doing better than the previous expansions, it’s making NPCs feel like real people.

Traditionally, most of the NPCs in this game have felt like little more than quest-dispensers. Blizzard didn’t put a lot of effort into making them into legitimate characters in the story, barring a few notable exceptions.

However, between a huge increase in unique voice-overs and more fleshed-out writing, the NPCs in Pandaria feel much more like living, breathing people, and that makes the stories come alive a lot more.

Getting back to Krasarang specifically, my one major complaint is that it feels unfinished. All the major arcs are very short and conclue quite abruptly. Considering all the cool ideas that went into this zone, that’s kind of disappointing.

The Valley of the Four Winds:

Honestly, there’s not much more to say other than that. Beating up overgrown bunny rabbits and baby-sitting Chen Stormstout’s obnoxious niece do not fit my definition of heroic adventure. Whereas the Krasarang Sunwalker plot made the world come alive by evoking powerful emotion with a simple dilemma, the Valley is just domesticated and dull.

Aesthetically, the zone is bland. It’s pretty, but it’s pretty in a very monochromatic and uninspiring way. The music is utterly forgettable.

Also, who else is crushingly disappointed they couldn’t get the original voice actor for Chen Stormstout? This new guy is just so… flat.

Finally, I’m no expert on geography, but I’m pretty sure the Valley of the Four Winds isn’t a valley. It appears to be a plateau. 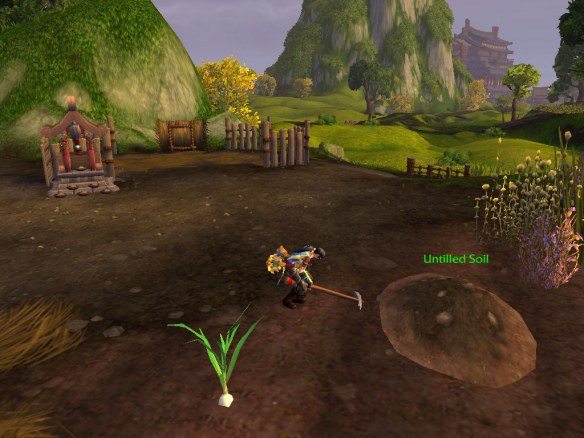 Pretty much every expansion has had at least one zone that just didn’t work, though. Even Wrath had Sholazar Basin. In some ways, I’d rather have a zone that’s a total write-off than something that falls just short of perfection like the Jade Forest did.

The one thing I did like about the Valley of the Four Winds is the farming mini-game in Halfhill. It’s a fun little change of pace from the usual questing model, and I’m looking forward to expanding my farm once I hit 90.

Level through Krasarang. It’s a better zone all around.

Or at least I think so. What’s your opinion?

I continue my (spoiler-filled) journey through the new leveling zones in Mists of Pandaria, bringing my rogue and warlock through the first zone of Pandaria proper…

Like most people, I have something of a love/hate relationship with World of Warcraft. The Jade Forest is a good example of why.

The Jade Forest starts spectacularly. It’s one of the best intros to a new expansion in WoW’s history. Immediately, one of my main concerns for the expansion was dispelled; we’re going to Pandaria with a clear goal in mind. We’re after Anduin.

This rapidly leads into a pulse-pounding battle that is every bit as epic as I expect from Warcraft. But what’s actually more impressive than the excitement of it is the depth and maturity of the story.

For the first time a long while, things don’t feel entirely black and white. The Horde is still pretty much evil, which I’m not happy about, but at least we’re showing that the Alliance isn’t all fairytale heroes, either. We see the Alliance massacring unarmed Orcs and enslaving Pandaren children.

I can’t tell you what a relief this is for me. Please, Blizzard, more of this! This is what I loved so much about Warcraft III. Please keep this complexity.

I enjoyed the way the Jade Forest portrays the brutality of the war, and the way it contrasts that with the beauty and tranquility of Pandaria. There’s one particular location that summed it all up really well. Facing on direction, I’m treated to this vision of serenity: 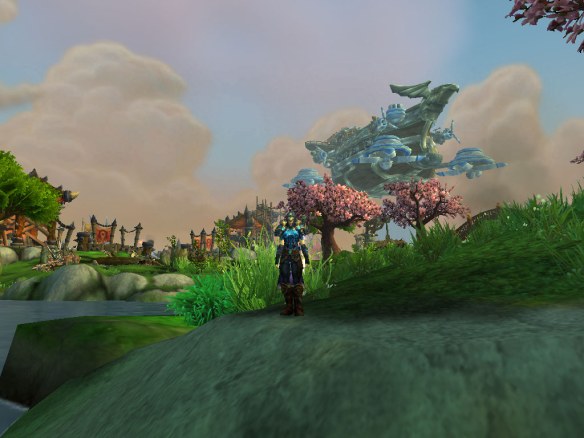 I also continue to be pleasantly surprised by how well the Pandaren are being portrayed. They really aren’t just a joke race. I greatly enjoy the characters of Lorewalker Cho and Taran Zhu, particularly how they clearly come from the same culture and philosophy but are also clearly very different people.

But as the zone progresses, the Jade Forest’s quality becomes more inconsistent. In particular, there’s a sharp divide between the two factions.

Both Horde and Alliance seek allies in the wilds of Pandaria. The Alliance chooses the Jinyu, a wise and spiritual race with a deep and unique culture. By contrast, the Horde allies with the Hozen, a degenerate race of perverted monkeys whose entire culture is based on feces.

Seriously, so many monkey crap quests.

I hate the Hozen. I hate questing for them; I hate fighting them. They’re a horrible, lowbrow, immersion-breaking race seemingly designed not just for kids, but specifically for the kind of kids who think it’s the most hilarious thing ever that you can spell “boobs” on a calculator. If the opening of the Jade Forest is the epitome of Warcraft’s storytelling at its finest, the Hozen are the epitome of Warcraft’s storytelling at its worst.

And yet everyone’s convinced Blizzard favours the Horde. Uh huh.

As you get farther into the zone, the story becomes less focused, as well. You end up helping the local Pandaren kind of out of the blue. Many of these quests are enjoyable, but they feel a bit like they came out of left field. It makes a bit more sense in the context of the Alliance story, but if you’re Horde, it really does come across as, “Okay, drop everything and go help pandas for no reason at all.”

Things are also confusing in regards to Anduin’s plot if you play both factions. I’m not sure if this is some kind of old school Warcraft scenario where each faction has a unique plot, and the opposing faction’s story doesn’t exist to you, or if the Alliance events take place at a different time than the Horde quests, or what. Anduin is free at the end of the zone if you’re Alliance, and captured if you’re Horde, and I’m just confused.

But then the ending of the Jade Forest rolls along, and the quality jumps back up again. We’re treated to a spectacular cinematic that tells us in no uncertain terms what the consequences of our war in Pandaria will be.

The ending still leaves a little to be desired. Things come to a close too abruptly, and I feel Yu’lon should be more pissed at us for the atrocities we visited upon her and her home, but these are relatively minor complaints.

From a gameplay perspective, I found the quests in the Jade Forest to be very enjoyable, but not spectacular. Honestly, Cataclysm was the golden age of quest design, and there’s not much Mists of Pandaria could do to top it. 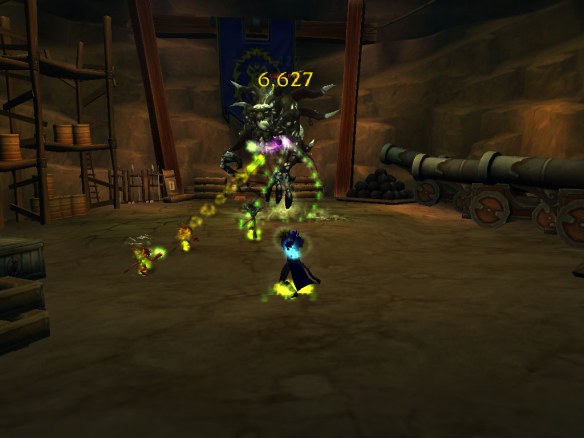 There’s only one mechanical improvement of note, and that’s the introduction of a new class of mobs. I haven’t seen a particular name given to them, but they’re essentially the opposite of elites: weaker than normal mobs.

This kind of variety is something I’ve wanted forever, but while it is an improvement, it doesn’t actually make as big a difference as I’d hoped. I just use AoEs a little more, which is something I’m doing anyway since both my classes are so indestructible right now that it’s not worth fighting mobs one at a time anymore.

(Seriously, why do rogues now have some of the best off-tanking and self-healing in the game? How does that make sense? Ah, but that’s a rant for another day.)

Aesthetically, the Jade Forest is spectacular. The music is, as always, absolutely stellar, and unusually well-varied, which makes it even more interesting. Normally, I don’t like “pretty” zones — give me Icecrown over Teldrassil any day — but the Jade Forest is just too colourful and exotic not to appreciate. 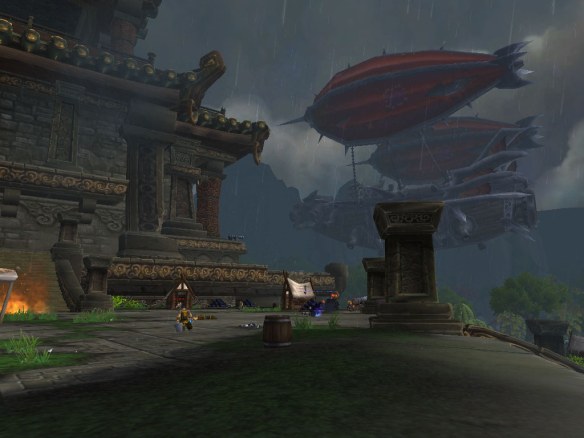 The Jade Forest has some great moments, and it’s almost a brilliant zone. But it’s that “almost” that’s driving me crazy.

And ultimately, that’s where my love/hate relationship with WoW comes from. Unlike most, I don’t think Blizzard is no longer capable of great things. They are, and they frequently do produce great experiences, but now there’s always that one stupid little mistake that keeps them from really getting to the next level. I can no longer just relax and enjoy the content; I’m constantly waiting for the inevitable stumble.

My latest WhatMMO article is 5 Ways People Take MMOs Too Seriously. Something we’re all familiar with, I’m sure.