The Secret World has at last launched its long-awaited group finder tool, and I’m finding it a study in how small changes can make a huge difference in how fun a game is. 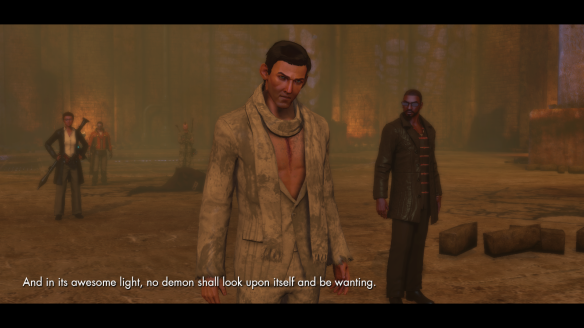 Really all the group finder does is make finding groups less time-consuming and encourage people to run a greater variety of dungeons — there’s now a daily challenge to complete a random dungeon via the group finder’s randomizer feature.

Yet this feels like one of the biggest updates TSW has ever had.

Consider that for much of my TSW career, running dungeons has been something done only very sporadically, and when I did, I basically only ever did Polaris on nightmare, plus the occasional Darkness War, Hell Raised, or Hell Eternal — and I do want to stress occasional.

Elites were worthless, with no relevant rewards at all. Non-18s nightmares were too stressful, and groups for those dungeons always mandated higher levels of gear than I own anyway.

It’s a whole other story now. I can easily find groups whenever I want — no need to muster the energy to spend an hour looking for a group — and now that elites, too, can be rewarding, the pool of potential dungeons has effectively expanded massively. I’m not stuck endlessly spamming Polaris.

I’ve done several runs with the group finder at this point, all positive, but there’s one story I’d like to particularly highlight. 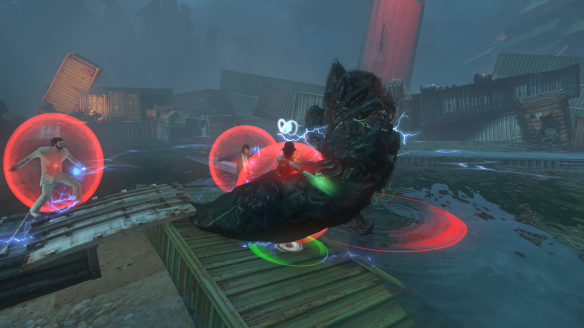 I’m getting in the habit of doing a random elite regularly for the daily challenge. It’s low stress and rewarding, reminding of running heroics back in Wrath of the Lich King so much the nostalgia is palpable. In this case, I was playing my Templar, who needs better gear to tackle Tokyo.

First of all, I was queued as DPS only, and the group still popped instantly. That’s amazing. That doesn’t happen in WoW, and it has a much higher pool of players to draw from. I can’t imagine how this happened, but I won’t look a gift horse in the mouth. It is worth noting, though, that while my other queues have not been instantaneous, they have all been very fast — five minutes at most.

We zoned into the Slaughterhouse, which is a dungeon I haven’t run in over a year, at least. It was a perfect sweet spot where I mostly remembered the mechanics, but it still felt almost new to me.

I had forgotten that TSW actually has great dungeon design. My complaint was always the difficulty of finding groups. But now I’m reminded that its dungeons boast fantastic art design, fun and interesting mechanics, and strong stories that don’t interrupt gameplay.

I think, also, that the stress of finding groups always robbed some of the fun from the experience. By the time I got into the dungeon, I was usually exhausted and frustrated from the time spent gathering a group, and the thought of how hard it would be to find another if this group broke up was a constant anxiety in the back of my mind. That’s no longer a factor.

It was a good run. The tank explained the more important mechanics for those of us with rusty memories, and since we overgeared the place a bit, it was all fairly relaxed. One person DCed at one point, but the group finder eventually replaced with them — with no input from us, even — and we did okay without them in the meanwhile.

At the final boss, things got interesting.

A mechanic bugged out and killed our tank early on. Automatic wipe, right?

It turns out our healer was some kind of demigod. Picture three DPS running around like chickens with our heads cut off while the healer somehow kept us alive through it all. I had resolved to merely go out fighting, but the battle kept going, and somehow, we endured.

Phase two starts. One DPS falls. The remainder of us come within inches of death several times. But the healer keeps bringing us back from the brink, and the boss’s health keeps going down. The tank is joking and cheering us on from back at the anima well.

And we did it. Our four-man, no-tank group triumphed.

Healing is disgustingly overpowered in this game. And I’m okay with that.

Afterward, we were all laughing and cheering. It was the most fun I’ve had in The Secret World — or any game — in a long time.

And it never would have happened without the group finder.

But even so, the dungeon finder is still a huge boon for the game.

I’ve long said that TSW is a fantastic game when treated as a single-player RPG with optional co-op, but that it fails as a massively multiplayer game. The first half of that sentence is still true, but now, finally, it is also a strong contender as an MMO.

I am, simply put, very happy with where the game is at.

Since we’re on the subject, TSW is enacting major changes to its subscription rewards program. As part of this, they will no longer be selling the grandmaster pack lifetime subscription as of February 5th. Until then, it’s on sale for 25% off.

I know $150 is a lot to spend on a video game, but I will say that I have been a grandmaster for over a year now, and I’ve never once regretted it. With the new subscription rewards, it’s also now a better deal than ever. If you’re on the fence, I’d advise you to get it now while you can.

While I wasn’t as rabidly excited as some, I’ve been interested in Blade and Soul for several years now. Now that it’s finally arrived in North America, I made a point to check it out as soon as the launch rush died down a little.

My thoughts are up on MMOBro, but suffice it to say Blade and Soul is not what I was expecting.

While you’re there, why not check out my other recent articles on the site? Find out why MMO NPCs need more Witcher and less Skyrim, or learn which MOBA is right for you.