Dawn of the Planet of the Apes is another movie I missed out while I was living out in the middle of nowhere, but thanks to Netflix, I have now caught up. 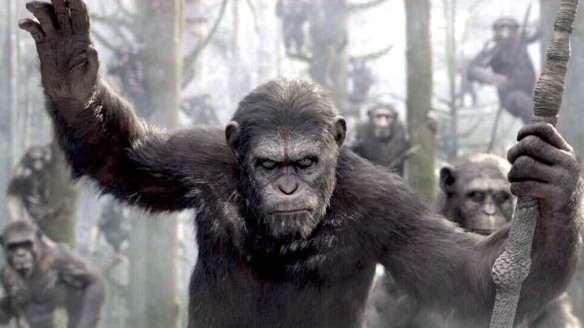 The previous movie was somewhat imperfect, but still enjoyable on the whole, and Dawn of the Planet of the Apes is pretty much the same. It’s more well put together than Rise was, but still ultimately unsatisfying in some ways.

For Dawn, the plot jumps ahead ten years and goes full post-apocalyptic. Most of the human race has been wiped out by the so-called “simian flu,” to the point where the apes believe humans are extinct altogether.

The apes, on the other hand, have prospered, and led by Caesar, they have begun to build their own society in the wilderness of California.

Caesar and the orangutan Maurice are the only characters to return from the first movie, though I doubt anyone’s complaining, as the human cast members were by far the weakest link of Rise of the Planet of the Apes.

Things change when a group of human scouts stumbles into ape territory, hoping to reactivate an old hydro-electric dam to power an enclave of survivors. Relations between apes and humans are initially tense, but Caesar hopes to come to an understanding with the humans, and he finds a kindred spirit in a human named Malcolm and his family.

But there are elements on both sides who are distrustful. The biggest obstacle to coexistent between human and ape comes from Koba, a lieutenant of Caesar’s who was tortured by human medical experiments in the past and wants nothing more than to make humanity suffer.

Dawn of the Planet of the Apes wisely puts a greater emphasis on the apes than its predecessor, and they remain the more interesting and developed half of the plot, but this time the humans are not so flat and lifeless, and they also prove a worthy contribution to the story.

There are also a lot less things in this movie that are, well, stupid, compared to Rise. There are still some implausible or ridiculous things — Caesar seems to have Wolverine-levels of healing ability, and the size of the ape population seems to vary based on the needs of the plot at any given moment — but on the whole it’s a much more well-written story.

However, the themes and arc of the story are a bit confused. It often seems to be wanting to tell a morally gray story, with neither the apes nor the humans being entirely good or evil, but in practice it does tend to make the apes out to be bad guys more often than not. Ultimately Caesar and Maurice are the only decent apes.

It makes the movie a bit hard to get invested in, because the apes are the focus and the main characters, but they’re also the villains. It’s… odd.

Perhaps because of this, I found the story somewhat unsatisfying. The ending is neither pleasant nor conclusive.

Overall rating: 7.3/10 Like its predecessor, it’s an interesting but flawed movie.