I have a turbulent relationship with the Star Trek franchise. It’s a long story, but suffice it to say I used to be a big fan, but no longer consider myself such. However, I still have enough love for the Star Trek universe that a Trek MMO holds a lot of appeal to me, at least in theory.

Unfortunately, when I tried Star Trek Online several years ago, I found it a baffling and frustrating experience with little to recommend it. I gave up almost immediately, and it went down in history as one of the very few MMOs I have genuinely disliked.

But that was a long time ago. Since then, STO has gone free to play and launched two expansions — Legacy of Romulus and Delta Rising — and I have evolved a lot as a gamer. Despite misgivings, I decided it was time to give the game a second chance.

Something that has changed dramatically about Star Trek Online since I first played it is the new player experience. The previous tutorial was rushed, throwing you into the deep end almost immediately. STO is an unusual MMO with an excessive degree of complexity, and it would have a very steep learning curve even without a shoddy introductory experience.

But the old tutorial has been completely thrown out and replaced. The new version is much slower, much better at teaching new players the ropes, and a bit more story-driven. It’s not exactly Shakespeare, but it certainly beats the original, “Here’s Borg; pew pew.”

It probably helps that I am a much more experienced gamer now. I first tried STO relatively early in my MMO career, but after playing nearly every major title on the market, I’m much better equipped for the complexity of Star Trek Online.

Another big change is that the Klingon Empire has been fleshed out as a proper faction, and you can now play a Klingon character immediately, instead of having to unlock it by playing a Starfleet character to level twenty. The Klingon tutorial deserves some credit for giving you command of your ship in the most Klingon way possible, though overall the story leaves something to be desired.

But as a big Romulan fan, the most important change for me is the addition of the Romulans as a playable faction.

Sort of, anyway. The Romulans are not really their own faction, but are more analogous to World of Warcraft’s Pandaren; around level ten, Romulan players are prompted to ally with either the Federation or the Klingons, effectively joining that faction. It’s also worth noting that players are not part of the Romulan Star Empire, but a splinter faction with a much higher ethical standard.

This was a controversial decision among certain fans, and I have mixed feelings on it. On the one hand, it makes good gameplay sense to not further spread the playerbase among another faction — I think having two factions in the first place was a pretty poor idea — and it does suit the Star Trek ideals.

On the other hand, it does feel like playing Romulans Lite. Romulans who aren’t backstabbing slimeballs feel fundamentally wrong, and I did often find myself wishing I could have signed up with the Star Empire instead.

On the plus side, Romulans do have their own unique line of ships and some substantial story content which is of a pretty high quality. I did end spending most of my time in the game as a Romulan.

One thing that hasn’t changed is the game’s awesome character customization. You still have a tremendous ability to customize the appearances of your character and ship, right down to body language.

By some combination of the better tutorial, my increased skill as a gamer, and the appeal of the Romulans, I managed to enjoy Star Trek Online enough this time around to really get into the game and explore what it has to offer.

STO is almost two games in one, dividing its time evenly between sequences where you control your character (often supported by a team of NPC bridge officers) and space missions where you pilot your ship.

The ground combat is bizarre. It’s like they tried to combine every single combat style there is. It’s a weird mash-up of a traditional tab target MMO, an action combat MMO, and a shooter. Crouching, aiming, active dodging, melee combos… It has every mechanic in the book. 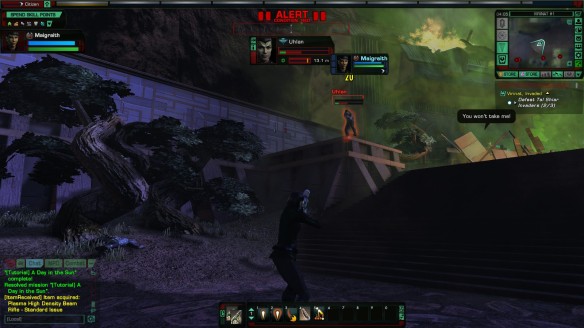 It’s not entirely unpleasant, but like much of the game, it’s needlessly complicated and a little confusing. Thankfully most of the content seems easy enough that you can just ignore a lot of the frills and shoot things until they stop moving.

The space combat is a bit of a mixed bag. It’s very unique compared to combat in other MMOs, and it does feel very authentic to the space battles in Star Trek, but it can also be awkward at times, and the fights often drag on for far too long. I like longer, more substantive fights, but some of the battles I had in STO just seemed endless.

Overall, I enjoyed the space combat, and it’s probably the most compelling part of the game, but it’s terribly inconsistent.

When it comes to group content, there are five and ten-man missions that can be easily accessed through short queues. I didn’t quite figure out the finer details of group combat in STO — I know it has some version of the tank/healer/DPS trinity, but I didn’t really see how it plays out in practice — but I did enjoy the group content I did, even if it was a bit chaotic and confusing.

They captured the look and feel of the Star Trek universe very well. Turn off your UI during a big battle, and you’d think you were watching one of the larger battles from the TV shows.

STO has PvP, but when I tried to queue for it, I was helpfully told there were a grand total of zero other players in the queue, and that went on long enough that I eventually just gave up. I guess PvP isn’t a big part of the Star Trek Online experience.

Another activity is the duty officer system, which allows players to send various crewmembers on missions to gather loot, experience, or craft new items. It’s a pretty simple system that almost runs itself, but hey, free loot.

The final source of content is the Foundry, a platform for players to create and share their own missions. I’m a big fan of the Foundry in Neverwinter, also developed by Cryptic, but in STO, I had trouble using it due to travel restrictions enforced on lower level players. The one mission I tried was nothing special.

On the plus side, unlike in Neverwinter, the official missions actually have decent story and gameplay, so the Foundry isn’t quite so necessary.

Star Trek Online does still have quite a few issues. For one thing, its free to play model is very poor. Lock boxes rain from the sky, and as in Neverwinter, the entire server is spammed everytime someone gets a rare drop from them. Ships are available for real life cash, and these aren’t just cosmetic skins — these are very powerful ships, often with unique abilities. “Pay to win” is a supremely subjective term, but this is about as close to objectively pay to win as we’re ever gonna get. 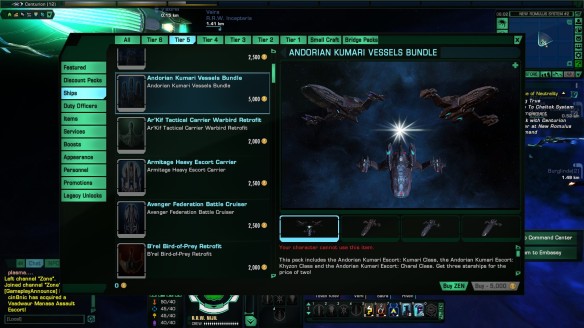 In theory, you can trade in-game currency for cash shop currency, but like Neverwinter, this requires obscene amounts of grinding to get even the cheapest items, and if my experience in Neverwinter is any guide, you’ll eventually reach a point where progression without spending money is all but impossible.

STO is also an overcomplicated game. The improved tutorials help a lot, but this is still a game that could probably scrap at least a third of its systems and mechanics without losing anything of value or harming the core gameplay. This is not a newbie-friendly game.

Which is a very poor choice on the part of the designers. This should be a game any Trekkie can easily jump into, but you really need to be an experienced gamer and/or willing to do a lot of research.

And there are other hiccups. The interface is still awkward and obtrusive. The voice-overs often leave something to be desired, especially on the Klingon side. The graphics for ground sequences aren’t the best.

Star Trek Online is a very flawed game. It occasionally borders on Rube Goldberg levels of unnecessary complication, the free to play model is just bad, and it has various other minor issues. 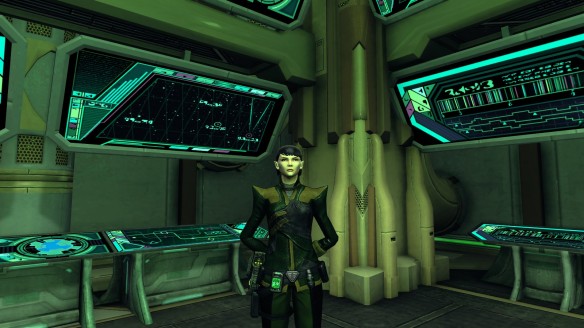 However, to my infinite surprise, I actually enjoyed my time in it. It has improved in many ways, and for all its other flaws, it does deliver an impressively authentic and nostalgic Star Trek experience, and it’s definitely not just another Warcraft clone. With good mission design and stories that manage to squeak ahead of the MMO pack, it provides an experience that is far more enjoyable than the confusion I experienced during my first trial of the game.

I’m even considering continuing to play for a while — at least until I finish the Romulan starter storyline. It’s not a good choice for inexperienced players or those without a very high tolerance for invasive monetization, though.