Regular readers will know by now that I am not at all enamored with Warlords of Draenor, but also that Blizzard owns my soul, and therefore it is inevitable that I will play it at some point. 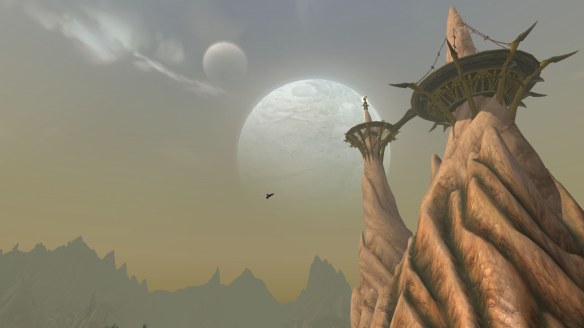 This past week, Blizzard held a sale on the expansion, and since Blizzard doesn’t do sales very often, I decided I’d pick it up, even though I don’t have plans to renew my World of Warcraft subscription right now. This way I won’t have to pay more than the usual price for an expansion.

While in my Battle.net account, I stumbled across an option to play a free trial of WoD. I clicked the link to get more info… only for it to instantly enable the ten day trial for my account. And as it turns out, it no only lets you try WoD, but also lets you play without a subscription for ten days.

So suddenly I was back in Azeroth.

Did not see that coming.

WoD has thus far mostly lived up to my expectations, which isn’t really a good thing.

I was able to get surprisingly far in WoD in my ten days. I decided to put aside my alt addiction for once (with one notable exception, which I’ll get to) and focus almost entirely on my rogue, and as a result, I managed to get to level 100 and a tier 3 garrison before my time ran out. 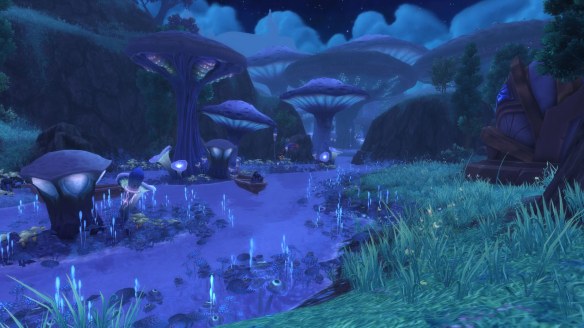 Leveling seems positively breezy this time around. I skipped nearly the entire Spires of Arak zone and almost every bonus objective, and I was still only halfway through Nagrand when I hit 100. It seemed almost effortless.

Unfortunately, in this case, it is the destination and not the journey, because the leveling experience in Warlords of Draenor just isn’t anything to write home about.

It’s not bad — don’t get me wrong. The quest flow is good, and mechanically, everything is solid. Some of the zones are fairly pretty — especially Talador and Shadowmoon Valley. But it all lacks flavour. There are no stunning twists, no memorably epic quests, no powerful moments. It all feels rote and sterile.

The weak story probably has a lot to do with this. At no point in WoD — at least on the Alliance side — is there any explanation of the Iron Horde’s motivations or backstory, nor are you given any strong reason to hate or fear them. It’s just a lot of “Hey, Orcs. Let’s kill them.” Draenor’s plot has all the depth of a mud puddle.

It also doesn’t help that the Alliance story is almost exclusively focused on the Draenei — I’m hard-pressed to remember a time in WoW’s history when one race has dominated the story so thoroughly. And by now, I think my feelings on the Draenei are well-known. 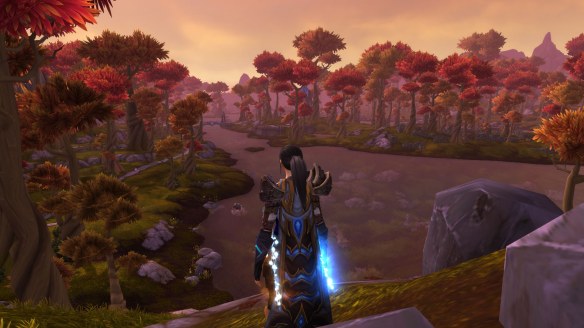 That said, I was actually enjoying their story to a surprising degree at first. One of my main problems with the Draenei is that they are essentially the Mary-est Sues that ever Mary-ed a Sue. They’re utterly flawless, they’re supremely skilled at everything, and they’ve managed to co-opt the identity of every other Alliance race.

But in the early parts of WoD, they’re presented much more as real people, with flaws. I particularly enjoyed the conflicts between the Rangaari and the traditionalists, and the idea that the Draenei have been too reckless in forcing Draenor to bend to their will.

The Rangaari in general are pretty cool… though I guess they are another case of the Draenei stealing the Night Elves’ thunder. But eh, I still like them.

Unfortunately, the Draenei plot soon became hijacked by the newly introduced Yrel, and she is the living embodiment of everything that is wrong with the Draenei: a contrived, shallow character with no flaws who is constantly viewed as a born hero and saviour despite the fact that she’s never actually done anything other than getting everyone around her killed.

Yrel makes me glad that Blizzard tends to be abandon characters after the expansion that introduced them. I’ve only played WoD for ten days, and I’m already sick to death of her. 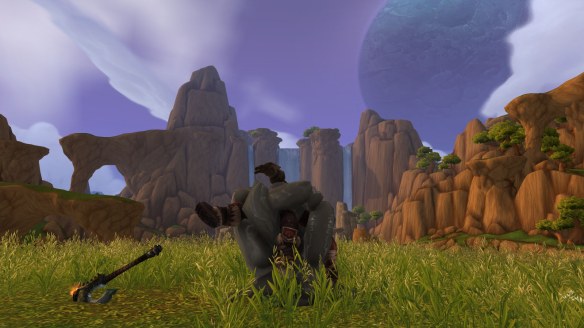 The moment so far in WoD’s story that I’ve truly enjoyed was Garrosh’s end. It takes a lot to piss off Thrall, but when it happens, it is terrifying.

It also doesn’t help that the soundtrack was quite weak this time around — which is shocking, because WoW’s soundtrack tends to be the best in the industry. A lot of this is probably due to the fact that a tremendous amount of the music in WoD is recycled from past expansions, which is very distracting.

Similarly, the dungeons in WoD are not in any way bad, but they’re quite unremarkable. I’m surprised by how much the removal of dungeon quests has sucked the soul out of the experience, but it really does make a difference. I had no emotional investment in any of the dungeons.

The only ones I particularly enjoyed were Grimrail Depot — or, as I call it, Last Train to Cairo with Orcs — and Shadowmoon Burial Grounds. They both feature nice visuals and some fairly entertaining fight mechanics. I’d still take almost any Mists of Pandaria dungeon over them, though.

The one thing about WoD that I can say is really an improvement is the abundance of rare spawns, elites, and hidden loot throughout Draenor. For the first time in WoW’s history, exploration is actually rewarding, and it does make the world a bit more exciting. I loved hunting down all the elites in Gorgrond; reminded me of giant-slaying in Azshara back in the day. 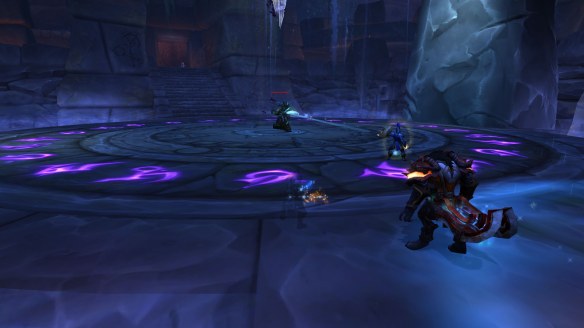 Ostensibly, these treasures are the reason for removing flight. They say flying mounts would trivialize the search for them, and granted, that is true to some extent. But you can quite easily obtain maps that mark every single treasure in a zone on your map permanently, and that trivializes them far, far more than flight ever could.

Also, Draenor definitely does not seem like a world designed without flight in mind. There are hills, cliffs, and pitfalls everywhere, and even just trying to complete quests to level can be quite painful at times due to the unnavigable terrain. Ironically, Pandaria did a far better job of making the world easy to get around without flight.

Overall, I wouldn’t say WoD is bad. The content is very mechanically solid. But it’s all tasteless. There’s no effort to be more than adequate.

That said, Warlords of Draenor does have one saving grace, and that is garrisons.

I’m still a little disappointed by how little customization garrisons offer, especially compared to more traditional player housing systems, but even so, I love them. 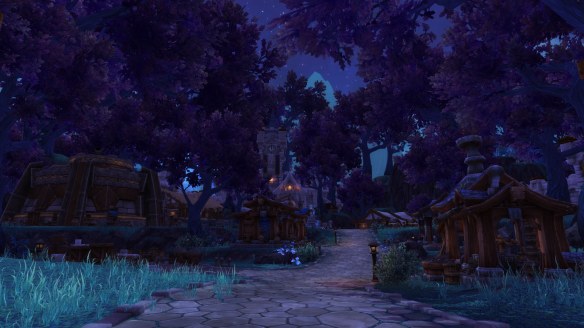 I can’t quite put my finger on what it is about garrisons I find so addictive. There isn’t a lot of gameplay depth there; a garrison basically boils down to an elaborate vending machine for free loot. Then again, what self-respecting MMO player wouldn’t welcome such a thing?

I think a lot of it is just down to the flavour of having my own fortress and private army. Who wouldn’t want a squad of minions to do your bidding? As a lore fan, it’s also quite gratifying to be able to recruit quest NPCs and notable characters from previous expansions.

There’s a lot of little details in garrisons that are neat, as well. Like the way the guards will salute you as you walk by, or being able to select your own music, or passing your followers in the streets.

I do worry about the future of garrisons. Blizzard has already said they don’t want to continue the feature in the next expansion — a baffling stance if I’ve ever seen one — but garrisons are so rewarding that people will still want to go back to Draenor to use them. Blizzard has a real problem with outdated content still having some value, so they’ll have to do something about that, bt garrisons are so much a case of something for nothing that it’s hard to imagine how Blizzard could nerf them enough to make them irrelevant without breaking them entirely.

This was also my first chance to get a firsthand look at the new Blood Elf models. 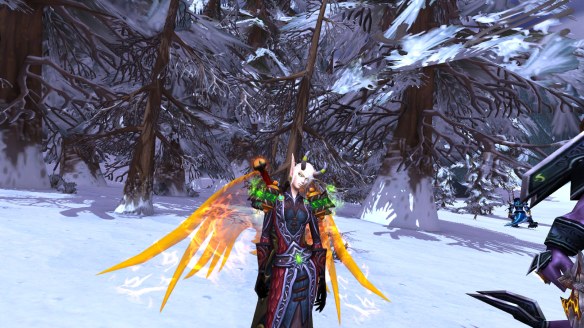 I have to say, I’m quite impressed. Blood Elves got the best revamp to date, I think. The new models look fantastic but are very faithful to the originals. My mage and warlock still look just like their old selves — only better — and I didn’t have to change their faces or anything.

Unfortunately, the other new models have also been tweaked, and I was no longer happy with the new face for my rogue. Her old face still doesn’t look right, either, so I had to choose yet another new face. And then I decided I didn’t like that one, and I switched to another. I’m still not sure I like it, and I’m feeling pretty unhappy with the whole situation. 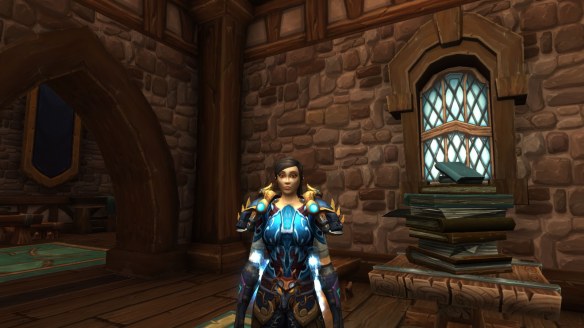 The one exception to my rogue-focus during the trial was that I continued to pursue the legendary questline for Dragonwrath, Tarecgosa’s Rest on my warlock, and I was able to make quite good progress, completing much of the story content for the chain.

I feel that this storyline embodies the best and the worst of World of Warcraft all at once.

On the one hand, the story is pretty compelling — not the best I’ve seen, but solid — and the production values are excellent. Revamping the Nexus as a solo dungeon was an excellent move, and the whole sequence was just great.

At the same time, I can’t help but be saddened by how few people got to experience this content when it was relevant. Those of us not in high-end raiding guilds — IE the overwhelming majority of players — had to wait years to see this content, and even now, I have to wonder how many people are willing to go through what is still a pretty huge grind just for some neat lore and an achievement.

Dragonwrath is a testament both to the quality of content Blizzard can create and how horribly skewed their priorities are. They built something truly excellent and then made sure that as few people as possible would be able to enjoy it. 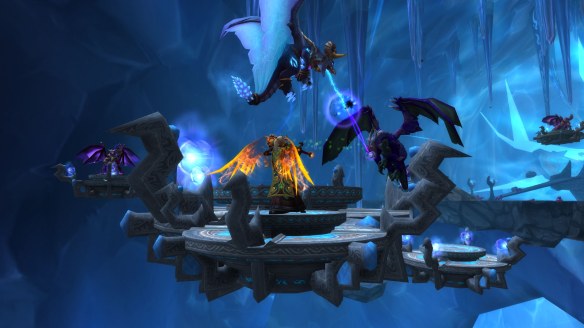 That’s WoW in a nutshell right there.

2 thoughts on “WoW: I Accidentally a Draenor”