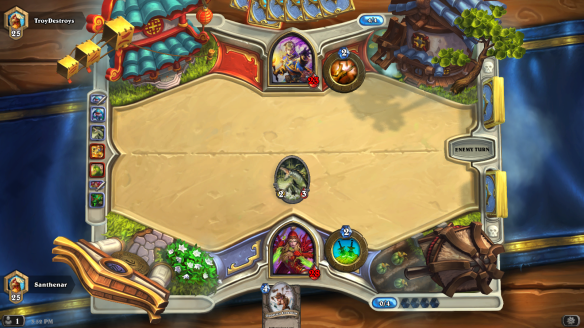 I’ve gone on record before as saying that Hearthstone is the first Blizzard game since pretty much ever that I have absolutely zero interest in. But they finally managed to rope me in with their Hearthsteed promotion.

It’s simple enough. Win three games versus other players in Hearthstone and get a fancy mount in World of Warcraft. I figured, how hard can three wins be? I may not be playing WoW at the moment, but I’ll be back sooner or later, and that mount looks pretty sweet.

So I ended up trying Hearthstone after all.

It turned out to be more fun than I expected, but considering how low my expectations were set, that isn’t saying a whole lot.

I will say that I like how accessible it is. The learning curve is almost non-existant, as it throws you into a tutorial immediately upon logging in and does a very good job of introducing you to the basic mechanics. It’s all very easy to digest, and this is a rare case of Blizzard effectively delivering on its “easy to learn, difficult to master” motto.

I cruised through my tutorial matches and started taking on players. I chose the rogue deck, largely because it’s the only one represented by a Blood Elf, and I always liked Valeera in the comics.

I did enjoy being a rogue, though. Lots of “make your opponent hate you” cards. Oh, you just played the best minion in your deck and spent all your mana buffing it? Yeah, I’ll just assassinate that.

I got my three wins quite easily and decided to keep playing for a bit, if only because I’ve had a rough week and didn’t have the energy to play anything more strenuous. I went on a massive loosing streak after my three wins, but eventually leveled out to a more even win/loss ratio. I made it up to rank twenty, whatever that means.

Even though the gameplay and mechanics are utterly different, it did feel surprisingly like WoW in some ways. Mages are over-powered, and all the noobs play hunters.

It’s also got WoW’s feeling of being just interesting enough to keep you playing. It’s never terribly exciting, but it engages you enough that you keep queueing up for one more match. I’m sure Blizzard has delved disturbingly deep into human psychology to create this effect.

I tried a few other classes, as well. Priest was sort of interesting. All the healing spells were very helpful. I liked druid, as well, but it seemed to lack offensive punch, and I lost badly whenever I tried it.

That Dwarf announcer is still unbelievably annoying, though. Thankfully, you don’t have to hear him very often, but the rest of the audio is little better. Discounting the characters who have the same voice actors they do in WoW, the voice-overs in Hearthstone are just horrific. I mean, Blizzard’s voice-acting is always a tad hit and miss, but this is just as bad as it gets.

I also disliked how luck-dependent the game is. At the risk of passing the buck, I feel around half my losses were just down to get really bad card draws. And I’m sure a lot of my wins were because of my opponent getting bad draws.

And I still struggle to see the point of online card game. For me, the whole appeal of Magic was actually being able to hold and collect the cards yourself, to admire their artwork when you’re not playing, and to have an excuse to get together with friends. A digital card game just feels kind of empty.

Hearthstone was an interesting diversion for a day or two, but I don’t plan to stick with it. It’s just not that interesting of a game.

But hey, at least I got a free sparkle pony out of it.

4 thoughts on “Hearthstoned Out of My Mind”