I’ve talked in the past about my “head canon” for the characters I play in MMOs — the backstories and personalities I create as I play them. I suppose it’s the writer in me — I can’t help building stories around them.

I was pretty thorough in covering them, but that was then. This is now, and as the months have passed, I’ve created yet more alts, each with their own histories and personas.

My monk in World of Warcraft is quite literally ancient. She was a soldier even as far back as the War of the Ancients, ten thousand years ago. She witnessed the betrayal of the Queen Azshara, the horrors of the Burning Legion’s invasion, and the Sundering of Kalimdor.

When Tyrande Whisperwind created the Sentinels, my monk was among the first to join, and for the next ten thousand years, she served in their constant vigil, waiting for the Legion’s inevitable return. 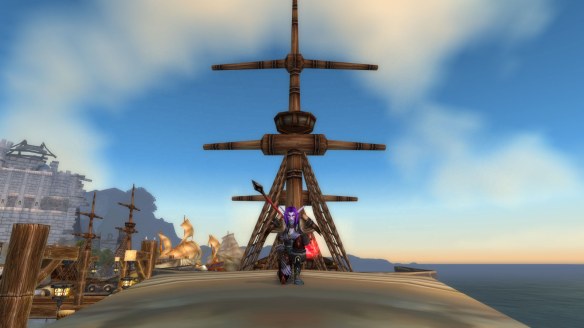 In this time, she trained constantly and became a master of virtually every weapon and fighting style in existence, though she showed special talent with unarmed fighting techniques.

When the Legion finally returned, she joined her sisters in battling them. At the Battle of Mount Hyjal, she stood alongside the Alliance and Horde, despite blaming them for the Legion’s return.

After the fall of Archimonde, she entered a period of introspection. She began to wonder if the inward-looking ways of her people were for the best. While they had stagnated within Ashenvale, the rest of the world had changed dramatically, and the results had been dire. The other races had given rise to the Scourge, allowed the Legion back into the world, and murdered Cenarius.

She started to think that a more proactive attitude toward the evils of the world might work better, a point hammered home again when Deathwing unleashed the Cataclysm.

But things didn’t really change for her until the Pandaren rejoined the greater world. Always eager to learn new and better ways to fight, she studied the fighting styles of their monks and found a perfect match for her existing unarmed fighting skills. 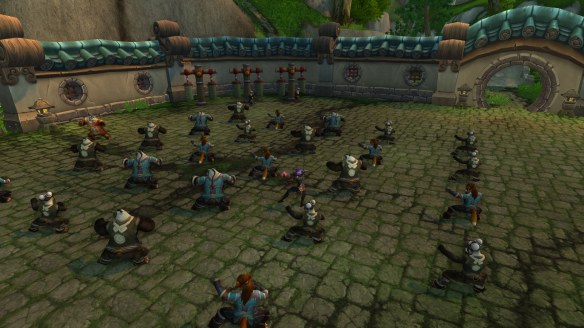 Her abilities as a warrior reached a new peak, and it empowered her to leave the lands of her people behind. No longer would she wait for danger to come to them; she would seek out evil in its lair and stop it before it could grow.

There is much anger in my monk. She has been a soldier for over ten millennia, and that has forced her to make great sacrifices. She has lost many friends, and seen many of the world’s most beautiful treasures besmirched or destroyed.

She also resents the younger races. She sees them as responsible for much of the world’s current ills through their selfishness and reckless lack of foresight. Her contempt for her Alliance allies is barely less than the rage she feels toward the Horde. She works with them less to be helpful and more to make sure they don’t screw up anything else.

But her long life has also taught her the value of patience and discipline. You will rarely see the fiery emotion that burns beneath her calm exterior, and she is professional enough to always be polite, if not warm, with her Alliance allies.

The ranger: Princess to pauper

“Don’t trifle with me, surface-dweller.” 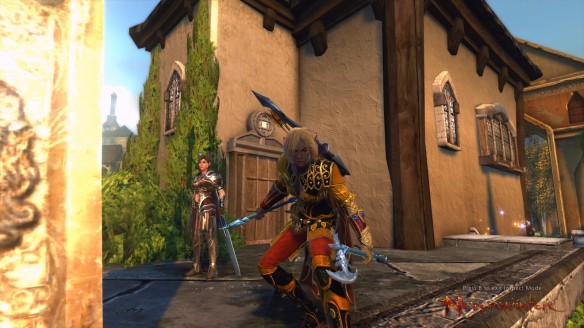 My Neverwinter main was born to a life of wealth and power. Belonging to a great noble house, her mother was a force to be reckoned with in the underground realm of the Drow.

But as is so often the case in Drow politics, the tides turned, and assassins stormed their villa within the Underdark. Barely an adult at the time, my ranger watched her mother, along with her entire family and all of their servants, die.

She nearly joined them in their fate, but she was able to get the best of her assassins and slay enough of them to slip away. She was badly wounded in this fight, and she carries the scars to this day.

With enemies everywhere, the Underdark was no longer safe for her, and she had no choice but to flee for the surface.

The peoples of the surface distrusted her because of her Drow heritage, and she loathed them for their soft and alien ways, so she spent many years alone in the wilderness, interacting with others only when absolutely necessary. She used this time to hone her skills of survival, becoming a master hunter, tracker, and archer.

Eventually, she gravitated back towards society, seeking out the city of Neverwinter, where a Drow was less likely to draw attention. She began to work as a mercenary, putting the skills she had learned in the wilds to use, and as she has grown more successful, she has even begun recruiting her own band of fighters to assist.

Though she would never admit it, she has started to develop a grudging respect for those who dwell on the surface. She still finds them incredibly soft and frivolous, but their notions of honor and loyalty, however alien, are strangely compelling. She finds it very hard to trust after what happened to her family, but she has developed a certain camaraderie with her mercenary band.

She has not forgotten what happened in the Underdark, though, and there is nothing she hates more than her fellow Drow. Given the chance, she would collapse their underground world down upon them for what they did to her and her family.

She will never forget, or forgive.

To put it bluntly, my Illuminati is a douche bag. He’s not the sort who should ever have been given super powers, but apparently the bees were desperate for recruits. Of course, in his own mind, he’s the epitome of cool. He’s a pimp, a gangsta, a playa, and a badass. As long as no one finds any pictures of him from high school, he’s golden.

He is the embodiment of everything that’s wrong with North American society. He’s greedy, selfish, narcissistic, and completely shameless about it all. He’s the sort of person who would use phrases like “YOLOswag” and “knee deep in bitches and Benjamins” without a trace of irony.

Unlike my other characters in The Secret World, he has completely embraced his new life. He revels in his new powers and thinks it’s “awesome” that he can fling fire balls and come back from the dead. He lives his life like it’s an action movie, wholly ignorant of all the innocent people dying all around him.

He’s taken the Illuminati’s “sex, drugs, and Rockefeller” motto to heart, and he revels in a life of wealth, booze, bling, and hard partying.

And he thinks that Kirsten Geary is a pretty hot boss. He still has enough common sense that he hasn’t tried one of his cheesy pick-up lines on her yet, but if he suddenly vanishes without a trace, we’ll know what happened. 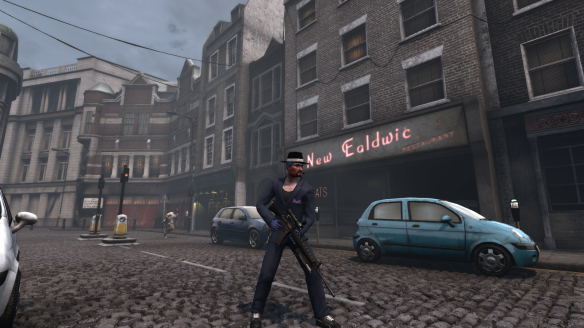 On an unrelated note…

A comrade in the blogosphere recently noted an odd Murloc in Northrend who seemed to have cracked the secret of flight. The trick is to fall and miss the ground, of course.

It’s not the only thing in Northrend to have issues with gravity, though. 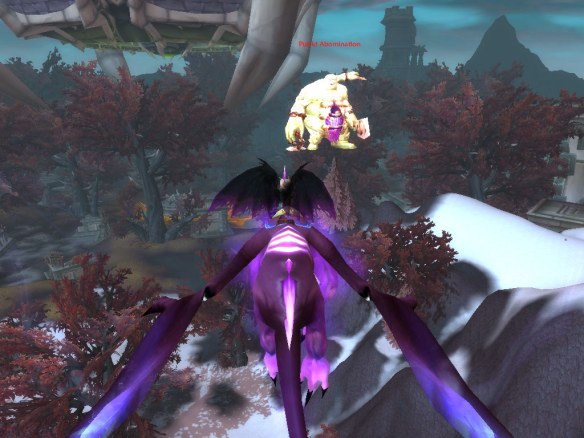 And while we’re at it, I think this goat is taking Emperor Shaohao’s lessons on becoming one with the land a little too literally…