You may recall I’ve had something of a love affair with the character creator in the online game Aion. In particular, I discovered it could be used to create nearly perfect replicas of the characters from my novels, and I proceeded to create virtually every major cast member from the World Spectrum books.

This was before I’d written Human Again. And while I attempted to keep the cast for Human Again small, there were nonetheless some important new additions, and I longed to see them in the digital flesh. One lengthy download later, and…

The most significant new character in Human Again is Alistos, a young Piran soldier with a tragic history. Those who read Living for the Future will already have some familiarity with him.

Oddly enough, despite having dozens of possible hairstyles, Aion has little to offer in the realm of short, curly hair, so his hairstyle isn’t 100% accurate. Otherwise, though, he turned out very well.

The other significant addition to the cast in Human Again is Nahsreen, a Reborn Grayskin and lover of Alistos. 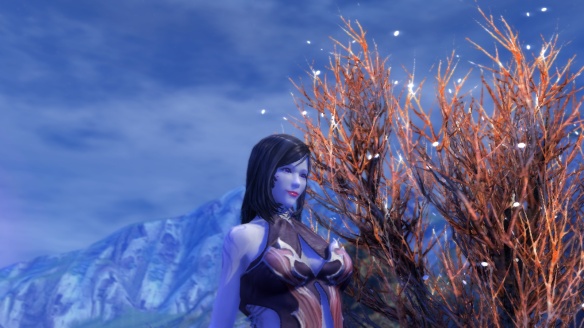 And for those wondering, yes, this is the same girl mentioned in Living for the Future.

She turned out about as I wanted her. Unfortunately, the lighting in the Asmodian starting zone makes her skin look a little darker than it actually is. Also, the shoulder tattoos weren’t my idea. Couldn’t get rid of them. Still, a near perfect match to the image in my mind.

One major character I never created while tinkering with Aion previously was Yarnig. I skipped him because I wasn’t sure I could accurately recreate him. Yarnig isn’t a very attractive man, and Aion doesn’t do “unattractive” very well. Not while keeping semi-realistic proportions, anyway. Plus, the curly hair issue.

But this time around, I decided to give it a go anyway.

This still isn’t perfectly accurate to my vision of Yarnig, but it’s much closer than I expected. His skin should be a little less flawless, his hair curlier, his face bonier, and his ears larger, but overall, this is pretty darn close to the Real Slim Yarnig.

What I’m really happy with is his expression. It’s the perfect mix of world-weary ennui and mild depression. Even if a few details are off, this definitely captures the spirit of Yarnig’s character, and that’s the most important thing.

I forgot how fun this is:

I completely forgot what a thrill it is to be able to recreate characters that I’ve spent years imagining. I’m a very visual person, and the lack of any visual feedback is one of the things I find discouraging about writing. To see these people I’ve imagined in such detail emerge into the real world where others can see them… It’s an amazing feeling.

I must admit to spending an inordinate amount of time just staring at the finished screenshots over the past couple days.

I also forgot how easy it is. It only takes a half an hour at most to create a perfect simulacrum of one of my characters — vastly quicker than traditional artwork.

Aion’s character creator is very easy to use, and it’s gotten even better since the last time I played. There doesn’t seem to be a lot of new options — though a few of the hairstyles look new — but the interface has been redesigned to be a bit more intuitive. It’s easier than ever to get the look you want. Plus, you can now preview characters in a variety of outfits and ability animations. 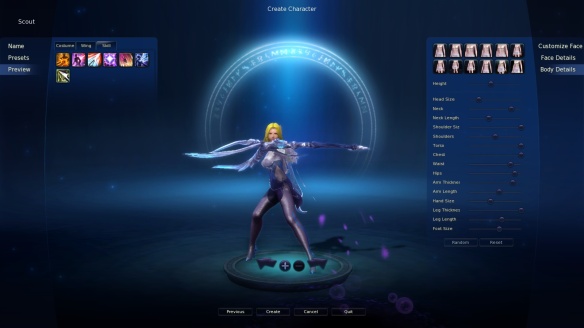 As for the game itself, I still haven’t decided if I want to actually play it again. Though I will admit to a strong surge of nostalgia when I saw my ranger on the character select screen, and I have noticed some minor but welcome improvements to the game, like a separate bag for quest items and currency (thank you, merciful God).

I was also impressed by how busy the starting zones are for a relatively old and supposedly unpopular game. I saw a lot of low level players, and only a few were from the new classes.

But I’m getting off topic.

Creating one’s characters like this can be very addictive. I’ve finished the main World Spectrum cast, but I’m still not stopping. I’ve been considering creating some of the children of the main characters (grown up, of course), and I’m building the casts from some of my other works as well, including my Big Important Unnamed Series for which The Wounding was a prequel.

I know I shouldn’t keep teasing you guys about this, because it’s still years away, but… I can’t help it.

In the immortal worlds of everyone’s favourite Albertan killbot, “See the face of the shape of things to come.” 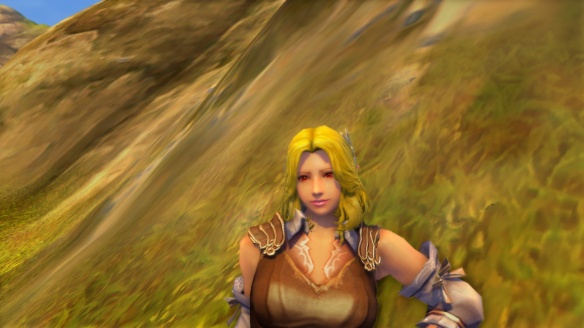