My journey has ended, sooner than I expected. My warlock is now level 90, and I have completed all of the leveling zones included in Mists of Pandaria.

But before I fully throw myself into the endgame gear treadmill, I have one more (spoilerific) “Into the Mists” column to write.

There are two main things that struck me about the Townlong Steppes.

One is that it’s a great example of an important but often overlooked aspect of good story-telling: anticipation. Think about it; even the most epic, exciting event won’t be interesting if it just comes out of nowhere. Building anticipation puts things in context and makes the climax all the sweeter when it comes.

Since very early in our journey in Pandaria, we’ve been hearing about the wild lands beyond the Serpent’s Spine, and the threat of the Mantid. We’ve learned there’s something terrible going on over there, though not exactly what.

All this anticipation made the venturing into Townlong Steppes feel like an epic experience even before I picked up my first quest, and thankfully, it didn’t disappoint from there. The zone provides a gripping, emotional journey, full of action as we battle both the Yaungol and the Mantid. Once again, we come face-to-face with the terrible consequences of our war.

Another example of the power of anticipation is Townlong’s Sha of Hatred arc. The Sha is introduced very early on in the zone (and sooner if you do the Shado-pan Monastery dungeon), but it takes most of the zone’s storyline to finally track it down, and that again allows one to build anticipation for the final confrontation. It makes it feel a bit more epic than just fighting another quest boss.

The other thing that strikes me about Townlong is how far Mists of Pandaria’s story is from what it was advertised as — and that’s a good thing.

“Kung Fu Panda game for the eight year-olds” was the cry of every QQer prior to the expansion’s release, and while I doubted this myself, the previews seemed to fall mostly in line with this theory. The intro cinematic seems more like a Three Stooges skit than the opening to an epic Warcraft expansion, the announcement trailer basically boiled down to two minutes of “lolpandas,” and the previews were all bunny-men and alementals.

Thankfully, though, that’s not the game we got. MoP has its silly side, mostly in the early zones, but most of the time, it’s actually quite dark. I would go so far to as to say it’s darker than Cataclysm.

This is best summed up by the tragic tale of the husband and wife team of Suna and Lin Silentstrike in the Townlong Steppes. Lin is captured by the Yaungol in battle, and a desperate Suna sends players to find her husband.

But by the time the player arrives, it’s too late. Lin has been tortured to death. Mad with grief, Suna runs into the wilderness, swearing to slaughter every Yaungol she finds. The player must aid the Shado-pan in tracking her down, eventually finding her in an area where the very land itself has become choked by hate. It becomes clear that Suna has been possessed by the Sha of Hatred, and players are forced to put her down.

Yup, pandas are for kids all right.

In terms of aesthetics, I wasn’t a huge fan of Townlong. It was neither ugly nor pretty enough to be truly memorable, though I’ve certainly seen worse zones. The music is largely excellent, though.

Overall, Townlong is probably my favourite zone of the expansion, though it’s in a dead heat with Kun-Lai.

The Dread Wastes are a good example of the balance that needs to be struck in video game design. The zone has a great story, and if this were a book, that would be enough, but World of Warcraft is a game, and that’s why this zone falls short.

As I said, the story is good. The Klaxxi are a very interest bunch, the lesser of two evils and our reluctant allies against a greater monster. I absolutely loved the idea of the Paragons. They’re a concept strong enough that an entire game — or book, or movie, or whatever — could be based on them.

But yet, even as the lore nut that I am, I wasn’t overly impressed by the Dread Wastes. Why?

The quests are boring.

It’s just that simple. The story behind the quests is good, but that story makes little impact on the content of the quests, and from a simple gameplay perspective, the quests just aren’t interesting.

Mostly, I just seemed to be killing animals to feed to the Paragons. Seriously, how many expansions need to go by before Blizzard realizes that killing a dozen turtles for their meat when only about half them drop it (because apparently the others are made of paper machè or something) simply isn’t fun?

The Klaxxi dailies are no better. There’s an epic war going on between millions of Sha-corrupted Mantids and every other living thing on Pandaria, and you’ve got me killing turtles, picking up amber, and beating up Saurok? Really?

(As an aside, I’ve also found the Golden Lotus dailies extremely dull and uncreative. So much for the innovative new dailies we were promised — these are all major steps back from the Molten Front, and even from many Wrath dailies.

But anyway, back on topic.) 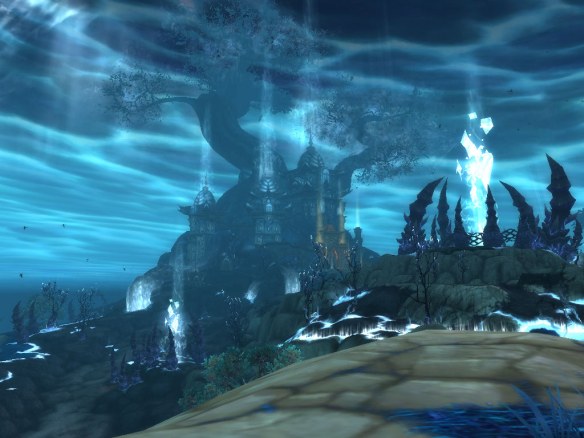 On the plus side, the Dread Wastes is probably one of the best zones Blizzard’s ever produced from a visual perspective. It’s bleak, but it’s spectacularly bleak. Like in Icecrown, you feel like a badass just for having the courage to be there. All the Sha corruption is surreal and dreamy (if those dreams are nightmares), and the vaguely Gothic look of the Mantid architecture is just great.

On the other hand, the music is pretty weak, distractingly bolstered by reused tracks from Outland and Northrend. And not even particularly good tracks from those continents at that. 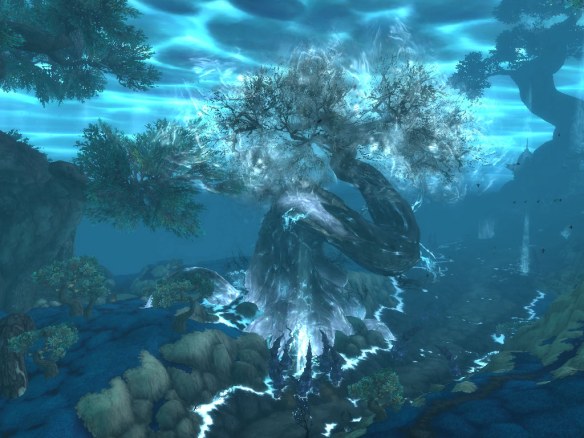 How about you, dear reader? What did you make of Mists of Pandaria’s final leveling zones?

6 thoughts on “Into the Mists: Beyond the Wall”