World of Warcraft and other Blizzard games are famous — or perhaps infamous — for their hammy, over-the-top voice acting. Love it or hate it, you can’t forget it. We’ve all heard the memes: “THE WILL OF THE TEMPLAR IS STRONGER,” “BETRAAAAAAAAAAAAYS YOU,” and such.

Many people criticize it, and sometimes, it can be pretty bad, but I believe there is method to Blizzard’s madness, and recent events have strengthened this belief.

I’ve swallowed my dislike for Bioware and picked up a copy of Mass Effect II — starting halfway through the trilogy because Bioware never bothered to make the original compatible with the most modern operating systems. I was tired of wondering what everyone was raving about. I plan a more detailed post on it once I finish the whole game, but for now, the voice acting is one issue that stands out to me.

Bioware’s voice acting is pretty much the opposite extreme from Blizzard’s. It’s down to earth and realistic to the point of bordering on the dull.

Some characters have memorable voices, but they’re the exception, and even the most passionate characters seem almost incapable of displaying emotion most of the time. I find it’s seriously hurting my ability to enjoy the game, and it shows me my hunch about video game voice acting was correct. 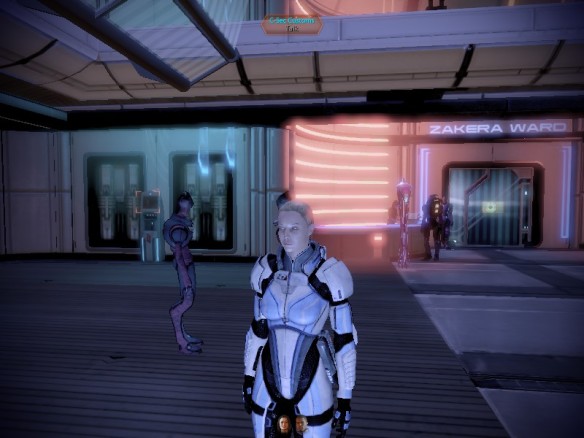 You see, the thing about video games is that most don’t have the graphical technology to show facial expressions, and even those that do generally can’t get it right. ME2 has the best graphics I’ve ever seen by a wide margin, but even so, I cringe at the uncanny valley rictus that is Miranda Lawson smiling.

So video games need to rely on other methods to convey emotion, and voice acting is by far the best way to do that.

But normal conversational tones don’t convey enough feeling on their own without expressions to back them up. Thus, you need to dial the emotion up to eleven to get the point across. I liken it to how stage actors have traditionally worn masks or makeup to exaggerate their expressions so that even those seated far away can see them.

And this is where Mass Effect’s voice acting tends to fall flat. By trying to make their dialogue realistic, Bioware is instead making it seem dull and lifeless. I want my Shepard to scream and rage at the Illusive Man, but all she does is sound kind of frustrated, at best.

And I know it’s not the actress’s fault, because Jennifer Hale also voiced Leah in Diablo III and did a stellar job, infusing each and every one of her lines with life and personality. It’s merely a directing issue. Bioware took the wrong path in its voice acting decisions.

I don’t think it’s a coincidence that the only characters in ME2 I find compelling right now are Mordin and Thane — both individuals with very unusual voices and/or speech patterns.

So I think Blizzard’s hammy, occasionally ridiculous voice acting is a lot closer to the ideal for a video game.

Not to say it’s perfect, of course. They do have a tendency to go overboard, and I certainly won’t defend “BETRAAAAAAAAAAAAYS YOU.” But certainly characters like Zanzil and Kormac would not be nearly so fun without their exaggerated voices. You can actually hear Kormac grin when he says, “I tried to count how many we’ve killed… but I’ve lost track.”

Take as an example one of the most popular WoW patch trailers, Gods of Zul’Aman. The universal love for this trailer basically comes to down to just one thing: the voice actor playing Zul’jin.

He obviously got into the role. Ten thousand years of inborn hatred seethes from every word he utters. I can just picture him spitting into the mic in the recording booth as he rants. It is, in a word, awesome.

Now, if they’d told him to be just a little more sedate, a bit more grounded and realistic in his voice acting, this would just be a generic trailer for an unremarkable raid from way back in Burning Crusade, instead of one of the most beloved WoW cinematics.

Blizzard games aren’t the only example of this, either. The Portal games were also a great illustration of how making your voice-overs a bit larger than life can improve a game.

And so if nothing else, Mass Effect has given me a key insight into what makes a good game. I now feel confident my hunch was correct and that voice acting in games needs to be a little flamboyant, a little ridiculous, to be effective.

…It occurs to me I just said WoW is better than Mass Effect in at least one area. I’m about to be lynched, aren’t I?

My latest WhatMMO article is on MMO rites of passage. How was I supposed to know you don’t use arcane spells as a frost mage?