Blizzard recently held their quarterly investor conference call. Among the news of note was that Diablo III was being delayed again (gee, what a shock) and is not expected until Q2 2012 at the earliest, and that Blizzard is probably only going to release two games this year. These are most likely D3 and Mists of Pandaria, so the wait for Heart of the Swarm continues.

This is mildly disappointing, but not at all surprising if you’re remotely familiar with Blizzard.

After the major subscription losses mentioned at previous conference calls, the thing most people wanted to hear was the World of Warcraft subscription numbers. WoW reportedly has 10.2 million subscribers right now, which means a loss of 100,000 since November.

Fan reaction to this news is, of course, mixed. Plenty of people are still ready to declare Warcraft dead. But I see this as good news. Yes, they’re still losing subscribers, but the loss has gone from a flood to a trickle. The next conference call will let us known if the game is out of the woods yet — if it ever was truly in the proverbial woods — but for now, things have stabilized.

Yesterday, Blizzard posted a long-awaited update to the Mists of Pandaria talent calculator on their site. Now, it occurs to me I haven’t taken much time to discuss my opinions of the MoP talents here, so here’s a brief rundown on how I felt about them before today:

Warlock: OMGWTFAWESOMESAUCE I WANT IT NOW!!!!!

Rogue: Sucktacular. Nothing new to be excited about. Killing spree is watered down to Adrenaline Rush 2: Electric Boogaloo. Shadowstep for all specs is the only redeeming feature. In fact, I hated it so much I ended up participating in two massive threads on the official forum about how to fix it.

I don’t know or care enough about the other classes to intelligently comment on them, but I will note the death knight and druid trees looked pretty interesting.

But yesterday, many were updated. And to my great joy, the rogue tree was heavily revamped.

Now, there are still some parts that don’t thrill me. The poison talents are underwhelming, killing spree has still had the fun sucked out of it, and the stealth tier is pretty useless for a PvE combat rogue. But we also have some awesome new stuff to compensate.

An AoE vanish for the whole raid? Hells to the yes. I’ll never have a group wipe again! An honest to god ranged attack? With no cooldown? Again, hells to the yes. Deadly throw finally has a reason to exist. And no more sitting around while the ranged own me on Recount on boss phases where I can’t melee!

A lot of people are upset about preparation and shadowstep being on the same tier, fearing the effect it will have on PvP, but while I sympathize with them, it doesn’t have an impact on a PvE player like me.

As for the other classes, the warlock tree isn’t greatly changed and still looks awesome, but there are now a few confusing things. Apparently, destruction’s new infernal embers resource will also cause damage to them, which some people are understandably leery of. Even stranger, they’re also the only spec (in the game) that can auto-attack with a wand. Okay?

Warlocks still have an option to play petless, which is a dream come true for me.

The paladin tree has been cleaned up, with some of the more dull or situational talents removed. They’ve also gained a very interesting new level 90 tier that involves spells that damage enemies and heal allies simultaneously. I’ll be picking up holy prism, personally. Sounds like a very versatile and fun spell.

Most of the changes to the mage tree are minor tweaks to make the new spells more appealing, but arcane spec has gotten some significant changes, and the very dull polymorph tier has been replaced with a tier devoted to mana recharge abilities that also buff damage. I don’t find this tier as exciting as most other people seem to, but it beats an entire tier of different ways to turn people into sheep.

Edit: The more I think I about the new mage tier, the less I like it. I get to choose between interrupting my rotation to evocate every 30 seconds, losing all of my mobility, or a useful but extremely situational shield that will only be worth having on certain fights. My warlock is looking better all the time.

Again, I can’t really comment on the other classes too much. And of course, we’re still pre-beta, and possibly pre-alpha, so this is all heavily subject to change.

How about you? What do you make of the new Mists of Pandaria talent system, and yesterday’s updates?

And, as if all that wasn’t enough, Blizzard has released the latest mount from its pet store. Following the sparkle pony, the disco lion, and the annual pass cotton ball, we now have the magnificent macaroni dragon! 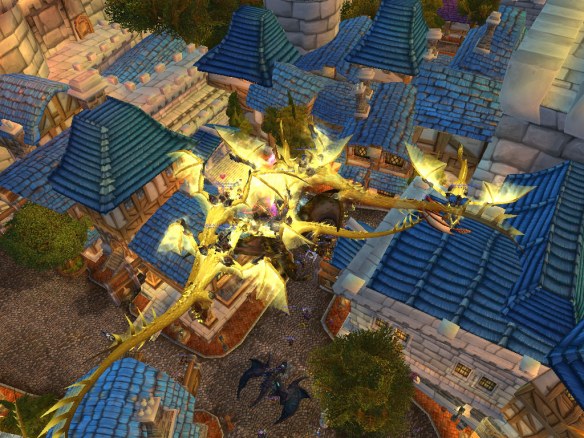 Actually, it’s called the Heart of the Aspects, and it does look pretty amazing. At least until you realize that it has no ground animation and never stops its undulating, “air-hump” animation.

Of course, this has caused all the usual nerd rage and craziness. Personally, I think it’s nuts to charge $25 for a mount, but as long as it grants no in-game advantage (*glares at guardian cub*), I have no problem with Blizzard selling it.

Writing and other stuff:

Weird Worm has posted another of my articles: Six Ridiculous Fictional Races from Otherwise Good Franchises.

I’ve also been tagged in one of those memes by a fellow blogger. It requires me to post the sixth picture from my sixth image folder. My sixth folder doesn’t have a sixth picture, so I’m just gonna cheat and pick the sixth one from my standard graphics folder. 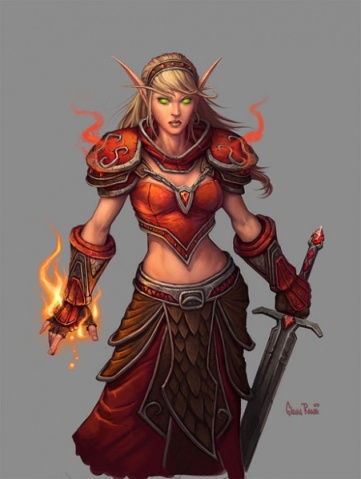 Why am I not surprised it’s a Blood Elf?

I will not be tagging anyone else, cause I don’t know six other bloggers and am a killjoy.