Romance and horror are two genres of storytelling that I would traditionally have told you I don’t like. They just don’t appeal to me. But lately I’ve been thinking that’s not quite right.

As I’ve grown older and more experienced, I’ve come to the conclusion that romance and horror are both genres that I actually enjoy quite a lot. It’s just that my idea of what makes for a good romance or a good horror story are very different from mainstream society.

There’s very little romance or horror that fits my unusual ideals for how they should be executed, and it took me a long time to find any at all. Once I did, I realized I could love them as much as an other style of story. It’s not the genres themselves that bother me, but merely how they tend to be executed.

I thought it’d be interesting to do a post examining what it takes for me to enjoy these genres.

With horror, I enjoy a much subtler touch than you normally see in mainstream culture. Most horror that I’ve experienced relies on grotesque monsters, buckets of gore, jump scares, or a combination of the above.

Those all work, but they’re cheap. They’re the path of least resistance. They’re lazy. What I crave is more ambient, more about thought and feeling. To give you an idea what I mean, my favourite literary work of horror is Edgar Allan Poe’s The Raven:

And the Raven, never flitting, still is sitting, still is sitting
On the pallid bust of Pallas just above my chamber door;
And his eyes have all the seeming of a demon’s that is dreaming,
And the lamp-light o’er him streaming throws his shadow on the floor;
And my soul from out that shadow that lies floating on the floor
Shall be lifted—nevermore!

I could also draw attention to The Secret World, a game I truly adore despite my normally lukewarm (at best) feelings toward horror. That game has its horrid monsters, its jump scares, and its gorey scenes, but it doesn’t use those things as crutches. TSW’s horror is at its finest not when the Wendigo jumps out at you in the parking garage, but while standing in the woods outside Kingsmouth, looking up at the stars and feeling alone in a hostile universe, or amidst the bright lights and cheery colours of Fear Nothing, reading the anguished words of a tortured child you came too late to save.

With horror, I’m not really looking to be scared. I don’t particularly enjoy fear. It’s already an emotion I have entirely too much acquaintance with.

But what I do like is being unnerved. Creeped out. There’s a certain strange allure to being nudged out of your comfort zone, to being reminded that the universe can be a strange and cruel place. 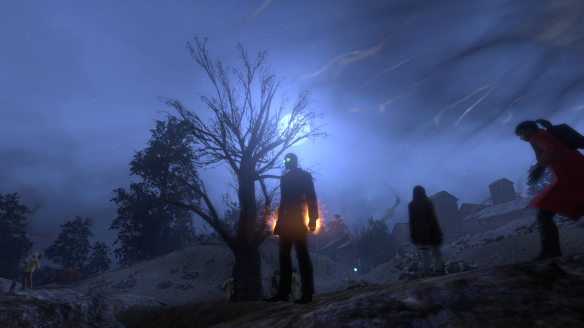 The horror that I enjoy isn’t about making you jump in your seat or squeal in terror. It’s about mystery and ambiance. It’s about reflecting on how much of the universe we still don’t understand, about hearkening back to when I was a child and I looked into the darkness and wondered what was out there, not entirely sure I wanted the answer.

My issues with romance as it is usually presented are more complex.

I’ll grant that a lot of it is just that a great deal of romance is, in my opinion, poorly written. It seems to me as if the golden rule of “show, don’t tell” is almost invariably thrown out where romance is concerned. In literature, it always seems to devolve into lengthy, tedious exposition on the depth and power of the character’s feelings, and romance in other mediums is rarely less hamfisted.

I’ve talked before about how King and Lionheart by Of Monsters and Men is one of my favourite songs. To me, it’s an exemplar for a better, more dramatic style of romance.

And as the world comes to an end
I’ll be here to hold your hand
Cause you’re my king, and I’m your lionheart.

It is, to my interpretation, all about the strength that one draws from love. About what one can face with their love at their side.

As I’m putting the finishing touches on this post, I’ve just finished rewatching Hellboy II: The Golden Army, and Liz’s decision to save Hellboy even at the cost of everything is, to me, a great example of romance done right. It’s powerful, but not overwrought. It’s hard to defend her decision, but also hard to imagine making any other choice in her place.

Perhaps it’s just because I’m a guy. I have a guy’s vision of what romance should be — involving swords and shouting and epic adventure.

Another major complaint, which I’ve mentioned before, is how romances tend to focus almost exclusively on the beginning of relationships. There are some compelling reasons for this, but it’s still incredibly myopic, and it’s one of the main reasons that romance tends to be arguably the most formulaic style of fiction in existence. There’s only so much variation you can put on infatuation and the honeymoon phase.

I’ve really been enjoying Liv and Major’s tribulations on iZombie. These are two people who clearly love each other with all their hearts, yet fate and cruel circumstance are constantly throwing them curveballs and keeping them apart. But they won’t give up on each other. It’s such a refreshing change of pace from the unbelievably stale formula of most fictional romances.

Even when fiction does present challenges in romance, it’s almost invariably in the form of a love triangle. Basically just more infatuation, but now our hero has to choose between two options! Oh, whatever shall they do!

I hate love triangles. All the same tedious “will they/won’t they” you get stuck with in a regular romance, the same milking, but times two, and you usually end up hating the protagonist. And once again, they’re so. Over. Done. 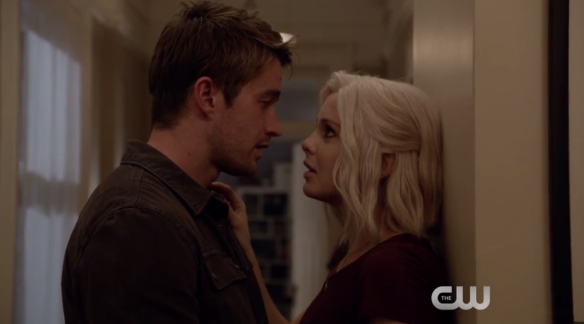 Ahem, sorry, bit of a tangent, there. My point is that romance lacks variety.

Another angle I’d like to see more of is unrequited love, though it depends on how it’s done. It can easily become overly morose, but it has potential. I’d particularly like to see more of characters who have feelings that simply aren’t returned, and they just have to live with it. That can be an interesting angle for character development. Can be a good way to make a character seem more heroic; if they’re still willing to move Heaven and Earth for their love, even if their love doesn’t love them back, that says more about their character than most anything else.

Fictional romances just seem so incredibly narrow to me. Even in my short and largely empty life, I’ve seen that love is a far more varied and complex thing than fiction tends to paint it as.

…As I’m getting ready to publish this, it occurs to me that I’ve managed to do a passage on romance I like without mentioning James Maxey’s Greatshadow, which is a terrible injustice. It would take me sometime to fully explain all the reasons why it’s my favourite fantasy romance, and this post is long enough already, but I think it’s some combination of humour, unique challenges for the characters’ love, and heartfelt emotion. Regardless, it deserved a mention of some kind.