Half-Life 2 is another of those games I missed out on during the period where Real Life prevented me from gaming. But to be honest, even if I had been gaming at the time, I probably wouldn’t have played it. It’s just not a game that ever interested me much. 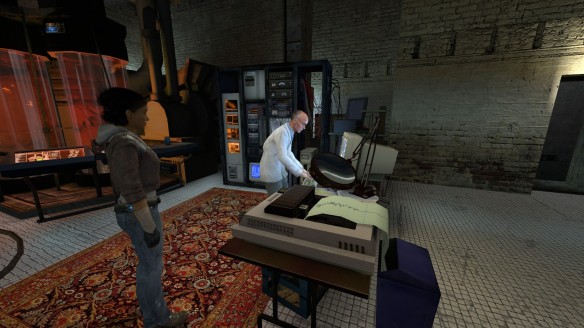 For one thing, I didn’t play the original. I know it’s supposed to be a classic, but I never grasped why. I did play the demo for it, and it just struck me as another Doom clone. Oh, a bunch of scientists accidentally unleashed innumerable monsters? Gee, I’ve never seen that premise before.

For another, I’m not the biggest shooter fan in the world. I liked them more when I was younger, but these days, I find I prefer the greater depth of RPGs and strategy games. Plus, the rapid movement of shooters tends to strain my wrist rather badly.

But I’ve spent years hearing people rave about Half-Life 2, so I decided I should finally give it a try. Supposed to have a good story, I heard. So I waited for a Steam sale and picked the whole trilogy up for a pittance, and as of the last few days, I’ve finally gotten around to blazing through all three games.

And I really don’t understand why Half-Life 2 is so beloved.

HL2 aged a lot more gracefully than I expected it to. Video games are not a medium that ages well, and I expected to have to deal with hideous graphics and clunky, outdated game design.

Fortunately, neither turned out to be the case. The graphics aren’t equal to modern top of the line games by any stretch, but they still look pretty decent, and aside from some rather dunderheaded AI, the gameplay held up very well, too. If I hadn’t known better, I’d never have known I was playing a game nearly a decade old.

Aside from that pleasant surprise, though, my first few hours in HL2 were pretty painful.

I’d heard a lot of people say that you don’t need to play the first game to understand the plot of HL2.

I had absolutely no clue what was going on in this game. Some aliens took over Earth and sterilized humanity because… they’re dicks, I guess? I had no idea who the aliens were, where they came from, or what they wanted. Most of the time, I wasn’t even sure what I was fighting. Aliens? Human collaborators? It’s all just a lot of masked humanoids shooting at me.

And there are also some other aliens helping humans. No clue who they are, where they’re from, or why they’re helping.

It took until Episode One for me to finally get a grasp on the story beyond the most basic elements, and even after finishing the trilogy, there’s a fair bit I don’t get. 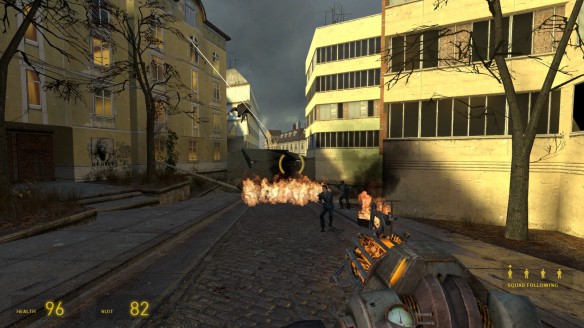 This isn’t necessarily HL2’s fault. I just wish I’d known the story was so dependent on having played the first game, or I might not have bothered.

I found the early gameplay very inconsistent, too. I was expecting an epic thrill ride — shooters are a genre based on constant action, after all — but it seemed to take a very long time for any real action to take place. Mostly I just seemed to spend my time running and hiding.

I gather they were trying to hammer home the horror of the Combine occupation, but I was expecting an epic struggle, not a game of cat and mouse.

The car one was a bit annoying, but the airboat level was Hellish. If I ever find out who at Valve designed that, I’m punching them in the jaw.

“Yeah, let’s put the player in a vehicle with all the maneuverability of a drunk, three-legged baby elephant and then force them to make jumps where being even an inch off course can lead to a crash. And they have to do them while driving at such ludicrous speeds that if you so much as breath you’ll spin like a top. And just to make it extra fun, let’s make it take forever!”

On the whole, the first half of the game just felt too stop and go. Every time things started to get interesting, there would be a left turn into some lengthy vehicle detour or puzzle. It had no flow.

I found the famed gravity gun disappointing, too. It’s a cool idea, and some of the uses for it are pretty clever, but the utterly arbitrary nature of what can and can’t be affected by it was frustrating, and it tended to be pretty impractical as a weapon — barring the ending, of course.

But to be fair, HL2 improved as it went along. I found the latter half of the game seemed to flow a lot better, and I started to legitimately enjoy myself. I’m not sure if it was actually better design, or if I was just getting used to the way the game played, but either way, it was a much more pleasant experience.

The last few missions were quite exciting, and I especially liked the citadel sequence with the super-charged gravity gun.

Despite my ignorance of the story, I started to get invested in the world and its characters, too. After hearing so much about Alyx Vance, I was disappointed she didn’t play a bigger role in the game, but she’s still a very likable character, and the other characters were also quite endearing.

I do think they might have gone a little over the top with her fawning over the player, and the fact that Gordon is an utterly silent protagonist makes their relationship seem pretty ridiculous, but even with these flaws, I thought Alyx was one of the highlights of the trilogy.

I think a lot of this is down to some really excellent voice acting. If there’s one thing Valve always seems to do right, it’s getting fantastic voice actors. Alyx is definitely going down as one of my favourite video game voice performances of all time. She just sounds so authentic, no matter what emotion she’s trying to express.

The animators also deserve a lot of credit. HL2 is probably the only game I’ve ever played where facial expressions look even remotely realistic without falling into some horrible uncanny valley, and the body language of characters can also be very expressive.

There was one moment in Episode One where Alyx just collapses against a wall and takes a moment to catch her breath, and it just felt like such a real moment, for lack of a better term. It was subtle, but very well done.

And that brings us to…

I think Episodes One and Two were a marked improvement over vanilla Half-Life 2. The pacing felt a lot more natural, there was a lot more action, and the story felt clearer. 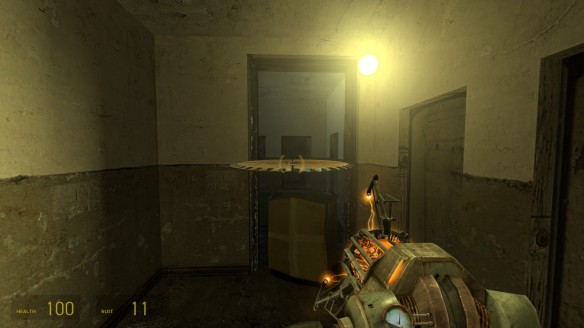 Alyx had a much bigger role, too, and that had a very positive effect on the game. Having a companion made for some more interesting gameplay, and the extra chatter and character helped to break the monotony of shooting zombies and using the gravity gun to stack crates.

Of the trilogy, Episode One was my favourite by a significant margin. The feeling of racing against time added a lot of excitement, and again, Alyx helped a lot.

Unfortunately, it was also extremely short. According to Steam, I finished the whole game in three hours. I’ve played Mass Effect DLCs longer than that. Even Portal took longer.

Episode Two was almost as fleeting. Combined, the expansions would have made for a very short game. Individually, they seem even more lacking.

Still, I had a lot more fun with the expansions than the main game.

Half-Life 2 is a good game. Most of my complaints are the result of having the wrong expectations or subjective biases. Airboat mission aside, I can think of very little objectively wrong with HL2 or its expansions. They’re well-designed, polished games with some unique aspects, and they’re a pretty decent way to waste a few hours. The bits of the story I understood were a little thin and cliche, but a rich cast of characters helped make up for that.

But I am absolutely mystified as to why this series is so beloved. It’s a solid B+ at best, in my books. I can’t begin to comprehend why it’s universally hailed as one of the greatest — if not the greatest — PC games of all time. It’s not even the best shooter I’ve ever played — the original Call of Duty and No One Lives Forever were both far superior.

At least I can understand why people are so crazy with impatience for the next installment. They really left us hanging there, didn’t they?