One of my purchases on this year’s Steam sale was Bioshock: Infinite, and as of yesterday, I’ve reached the utterly bizarre ending. 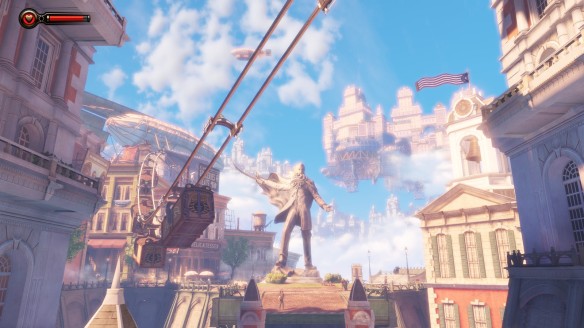 I thought of doing a proper review, but it didn’t seem necessary. Pretty much everyone already has an opinion on this game, and most things I could say are just repetitions of what other reviewers have said. Suffice it to say that I would put Infinite in the same category as Mass Effect, Dragon Age, and Remember Me — a great experience, but not a particularly compelling game. If I’d done a review, I’d probably have given it a seven or an eight out of ten.

However, there are a few aspects of the game that have stuck with me and left me feeling very confused and conflicted, so I thought I would share my thoughts on them. I’m not sure if anyone else will find them particularly interesting, but thinking out loud might grant me some clarity, if nothing else.

There will be many a spoiler.

I feel as though I wasn’t really in the target audience for Bioshock: Infinite because I’m not American.

Columbia as a setting is very obviously targeted at an American audience, with the intention of making them uncomfortable. I’m somewhat surprised Infinite isn’t a more controversial title — or maybe the controversy is there and I just didn’t notice — because it is a ruthless evisceration of the American cultural legacy.

Columbia is essentially a distillation of all the darkest aspects of American history and culture. It pulls no punches in displaying the utter brutality of slavery, racism, and unfettered capitalism.

And perhaps the most disturbing thing about Columbia is not its cruelty, but the way it has deified its cruelty. It has built a religion around hate and selfishness. This is a society where they raffle off the privilege of throwing the first pitch at a lynching.

Of course, I’m Canadian, so I have the privilege of viewing this all from a safe distance, comfortable in the blanket of smug superiority that we Canadians are so good at not showing.

But for an American, I imagine this could be a pretty hard game to stomach.

That was weird wild stuff.

I’m really not sure what I thought of the ending. I guess I liked it? Maybe? A little? Or not?

The thing is I never liked unhappy endings. I’ve often been criticized for this, but I tend to think a story has failed if it doesn’t offer at least some positivity at its conclusion. I’m not a fan of fatalism.

Bioshock: Infinite’s ending is pretty fatalistic. I never developed any fondness for Booker, and obviously his alternate incarnation as Comstock was just a horrible psycho, so I do not mourn them, but Elizabeth deserved a happy ending. Having every version of herself commit suicide by transdimensional patricide is kind of a bitter pill to swallow.

On the other hand, she prevented Columbia and all of its associated horrors from ever being created, so at least she died for something. We could count that as a win.

On the plus side, it managed to be an incredibly complicated and arcane alternate universes/timelines story that actually made sense and wrapped up all its loose ends. That’s no mean feat.

And if nothing else it deserves major points for being different, and for being able to affect me so strongly.

This is going down as one of the greatest video game mindfracks I’ve ever experienced, beaten only by the Red Sargassum Dream and perhaps Walk Into Empty in The Secret World.

Things like this make me so happy for the growth of video games as an artistic medium. That things like this are even technically possible now is amazing.

And that brings me to the final aspect of Infinite that lingers in my mind after its conclusion: Elizabeth.

I think it’s safe to say that anyone who’s played this game would agree that Elizabeth is by the far most memorable part of the game. She essentially is Infinite, the heart and soul of the story.

From a purely technical perspective, Elizabeth is a triumph. She is likely the greatest AI companion in video game history, with all apologies to Alyx Vance. She is never a burden or a hassle, and she fits into the gameplay seamlessly. You only notice her when she’s helping. She makes you wonder why every other game has gotten escort quests so wrong.

But what is perhaps even more impressive is how human she seems. She is perhaps the very first video game character I’ve ever seen who actually has real, believable facial expressions, without falling into some “animated corpse” uncanny valley. 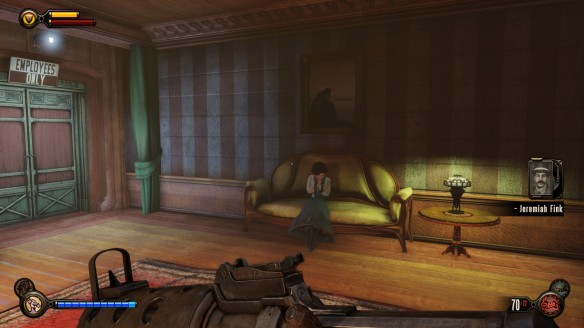 As an aside, I’m surprised I haven’t seen more “Elizabeth is not impressed” memes.

Then there are so many little touches that make her seem real, like the way she will have a seat on any available chairs if the player stops moving for any length of time. She is a fantastic example of showing and not telling, as her actions and animations display so much of her personality. Her childlike curiosity about every little thing is on full display as she constantly leans over tables to read the notes on them or inspects everyday objects. The game never has to directly highlight this part of her; it’s just always there.

But then we come to Elizabeth as a character, and that’s something that I’m a bit more torn on.

The problem is that Elizabeth is as stereotypical an example of the portrayal of women in video games as could possibly exist. She is a damsel in distress, through and through. She’s completely helpless on her own, and is totally reliant on the player’s direction and support.

In her case, it doesn’t even make logical sense for her to be so helpless. She has godlike powers — all of time and space is quite literally at her fingertips. Admittedly, her powers are slightly unreliable, but even so, it strains credibility to the breaking point that she couldn’t have escaped Columbia years ago. She certainly shouldn’t be as reliant on Booker’s help as she is.

So here we have a woman who possesses unimaginable power, but is completely unable to accomplish anything or act on her own initiative unless her daddy is there to hold her hand.

Again, why isn’t this a more controversial title? Or is there actually a lot of criticism and I just don’t know about it because I haven’t paid much attention to Bioshock prior to now?

Here’s where I start to feel conflicted, because despite the fact that Elizabeth couldn’t possibly be a more sexist stereotype, I really like her.

I mean, she was designed to be likable. Absolutely every aspect of her, from her over-sized blue eyes to the way she provides you with unlimited health and ammo in combat, was designed to endear the player to her.

But damn it, it works. I wasn’t terribly enamored with Infinite’s gameplay, but I was always eager to keep playing, keep pressing forward, just so I could ensure Elizabeth would achieve her dreams of life in Paris. And I’m quite saddened that she never will.

Even putting aside cheap tricks like her big eyes, Elizabeth is just an utterly likable person. She’s kind, gentle, and full of love for even the simplest aspects of life.

Come to think of it, she rather reminds me of the Reborn. Readers of my World Spectrum novels will know what I’m talking about.

Is it wrong of me to like Elizabeth so much even as she embodies all the negative ways women are stereotyped in video games? Am I betraying my own beliefs? Does this make me a hypocrite?

If nothing else, Bioshock: Infinite is a game I won’t soon forget, and I now feel much more motivated to get the original Bioshock to work on my computer.