At this point, I think it’s well known that I don’t think that much of the Marvel Cinematic Universe. The movies I’ve seen were all mediocre at best. But Black Panther did look to have some interesting visuals, and my friends kept pestering me about it, and I figured paying for a movie with this many black people was a good way to irritate racists, so… 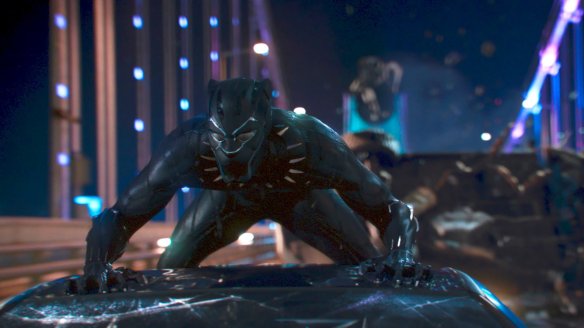 Since I’m pretty much the last person in the Western Hemisphere to see Black Panther, it’s probably not worth bothering to summarize the story. I figure you already know.

I will say this much: Black Panther is easily the best MCU movie I’ve seen yet.

The thing I really like about it is it’s not really an origin story the way these usually are. T’Challa is already pretty comfortable with his powers and feels pretty well-established as a character. Maybe they already covered his origin in one of the many Marvel movies I skipped. I don’t know. Don’t care.

The important thing is that this allows us to skip the tedious origin story tropes Marvel always seems to cling to, and go straight to the real story. It’s a fairly long movie at nearly two and a half hours, but none of it feels wasted. It’s got a really good balance of character development, world-building, and action.

It’s a visual treat, too. While it’s not stated in so many words, the conceit seems to be that Wakanda’s isolation has allowed technology to develop in entirely different directions from the rest of the world, leading to some very unique and interesting gadgetry, such as vibranium-infused cloaks that can conjure force fields at will.

It doesn’t really affect the plot, but it does lead to some very creative art design.

It leaves me wistful for all the cultures and mythologies, all the stories and artistry, that have been strangled by colonialism. Western culture is full of beauty, too, but its aggressive dominance has cost the world so much…

Black Panther is also helped along by a very strong supporting cast — with the notable exception of T’Challa’s insufferable kid sister. My personal favourite was Danai Gurira as the badass, honour-bound General Okoye. Any chance she can get a solo movie?

I also quite liked Lupita Nyong’o’s character, though it’s a bit of a shame she was relegated to be little more than a generic love interest.

That’s not so say I loved everything about Black Panther. It leans less heavily on Marvel’s bad habits than I would have expected, but they’re still there. The humour is cheesy and often feels forced. The ending is a little too quick, too neat and tidy. And the cyber rhinos were a bit much.

The themes of the movie are pretty muddled, too. It seems to want to provide an aspirational tale for people of African descent — a most noble goal — but this is somewhat undercut by the fact that Wakanda is, at its heart, a pretty terrible country, being rife with xenophobia and controlled by archaic and oppressive forms of governance.

Perhaps the idea was to offer nuance — to make Wakanda not entirely good or entirely bad — but when it’s presented as an enlightened paradise half the time and corrupt and brutal the other half the time, the end result is only confusion.

Mind you, I’m not exactly the target audience for Black Panther’s messages, and it does seem to have been very inspirational to a lot of people, which I respect.

Either way, I didn’t go to a MCU movie for intelligent social commentary, and I will at least give it credit for tackling racial politics and the dark legacy of colonialism in a very blunt and brave way. That’s more than I expected.

So I wouldn’t say Black Panther is a masterpiece or anything, but it’s the first MCU film I don’t feel any regret over watching.