Since I already had a Crave TV subscription for Discovery, I decided to peruse their other selections. One show that caught my eye was Lucifer, and while I didn’t know much about it going in, it didn’t take long for it to win me over.

Loosely based on a comic book of the same name, Lucifer focuses on the titular character, Lucifer Morningstar, also known as Satan, Beelzebub, and so forth. He’s the Devil, in other words. After a few thousand years of running hell, he got bored with the place and moved to Los Angeles, where he operates the nightclub Lux and lives a life of decadence befitting the lord of sin.

Lucifer’s playboy life takes an unexpected turn when one of his human friends is murdered. Lucifer finds himself mixed up with the police investigation into her death and develops a fascination with the detective in charge, a former B-list actress turned straight-laced cop named Chloe Decker. Alone of all humanity, Chloe is somehow immune to Lucifer’s devilish powers, and he wants to know why.

And the series pretty much goes from there. It’s basically yet another cop show with a supernatural twist, a standard police procedural apart from the fact one of the “detectives” is literally the Devil.

It’s a pretty basic show. The ending to each episode’s mystery of the week is usually very easy to see coming, and for the most part it’s just following standard tropes. It’s also no stranger to plot holes and is generally not a show you should think too hard about.

What makes it worth watching, though, is Lucifer himself. The actor who plays him, Tom Ellis, is absolutely brilliant. He’s perfectly charming and impeccably witty, and even at his sleaziest, he’s still irresistibly lovable.

He’s got range, too. Lucifer is mostly a comedic show, but on occasion it does have some more dramatic moments, and Tom Ellis absolutely nails those, too, injecting an incredible amount of pathos into the role. It’s amazing how sympathetic Lucifer can end up being (sympathy for the Devil, heh).

A core conceit at the heart of Lucifer’s mythology is the principle of history being written by the victors. God won the war in heaven, so we humans have only ever heard his side of the story. Naturally, he paints Lucifer, his rebelling son, as evil. But Lucifer himself tells a different story.

Devout Christians may be bothered by the idea of the Devil being presented as a sympathetic, if clearly flawed, person (and indeed the show has been protested by some activist groups), but I’m about as far from Christian as it’s possible to be in the Western world, so to me it’s an interesting new take on the mythology.

Also, to play Devil’s advocate (pun intended), I have heard it suggested that the message of Lucifer is, in truth, deeply Christian: the idea that no one is beyond redemption, not even the Devil himself.

Lucifer also feels like a refreshingly different character in some of the ways in which he defies the usual cliches of “superhero” type characters. Whereas normally in shows like this the protagonist seeks to conceal their true nature, Lucifer is quite open about it. He’s happy to tell everyone he meets that he’s the lord of hell. It’s just that people usually don’t believe him, viewing it merely as an eccentric affectation.

The show’s liberal attitude to sexuality can also be refreshing, if at times selective. It seems to me that matters of gender and sexual orientation would matter little to immortal celestial beings, and this is reflected by Lucifer and his demonic lieutenant, Mazikeen, both of whom seduce humans of either gender almost constantly.

We see a lot more of Maze with women than we do of Lucifer with men, so it’s not perfect, but at least the effort was made.

On the downside, Lucifer’s co-star, Chloe (Lauren German), is a lot less compelling. She’s rather wooden and just kind of dull in general. It’s fine when she’s just playing the straight (wo)man to Lucifer’s whacky antics, but in more serious scenes, she flounders.

The rest of the cast is mostly just okay, with no else being as delightful as Lucifer or as dull as Chloe, but I will highlight a couple standouts.

One is Rachael Harris’ “Dr. Linda.” Dr. Linda is Lucifer’s hilariously unethical therapist, and like him, she manages to nail both her comedic and dramatic scenes. She’s a real treat.

The other (and the thing that first drew my attention to Lucifer) is the great Tricia Helfer, who joins the cast in season two to play Lucifer’s mother, the “Supreme Goddess of All Creation.” If Tricia Helfer isn’t enough to convince you to watch a show, what is? 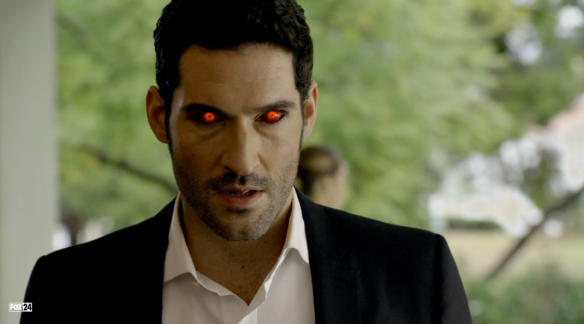 Overall, Lucifer isn’t the smartest show ever, and I wouldn’t expect it to be more than it is, but it’s fun. The sheer awesomeness of Tom Ellis is enough to compensate for the show’s hiccups. I’d recommend giving it a try.