So far, Discovery has had a fairly different style of story-telling from most of previous Trek, save parts of Enterprise and maybe DS9. That is, this is an arc show. It’s telling a single continuous story over several episodes.

“Magic to Make the Sanest Man Go Mad” is a throwback to more traditional Trek story-telling. It’s a “bottle show” taking place entirely on the Discovery, and it’s (almost) an entirely self-contained story.

Irate from his abandonment on the Klingon prison ship, Harry Mudd returns to exact vengeance on Captain Lorca and the Discovery, and with the help of some spiffy alien tech, he has all the time in the world to make his plan come to fruition.

Only Lieutenant Stamets, with his mushroom-altered consciousness, has the ability to recognize what Mudd’s doing, and hopefully stop him.

This is an episode that I enjoyed more than it necessarily deserves. It’s campy, it’s silly, it’s predictable, and it’s complete filler with no relevance at all to Discovery‘s ongoing arc. Mudd is a shameless and unnecessary play to TOS nostalgia, but inconsistencies with his portrayal in TOS are likely to incense the same fans he’s meant to target.

This is, in short, an episode that shouldn’t work. And yet it kind of does.

The thing is, this is also the most like old school Star Trek that Discovery has ever felt.

This is exactly the sort of episode that has traditionally made up the bread and butter of Star Trek. And that’s not necessarily a good thing. I’m not really a fan of trivial filler episodes like this, and I’m glad Discovery is going for a more arc-based approach. 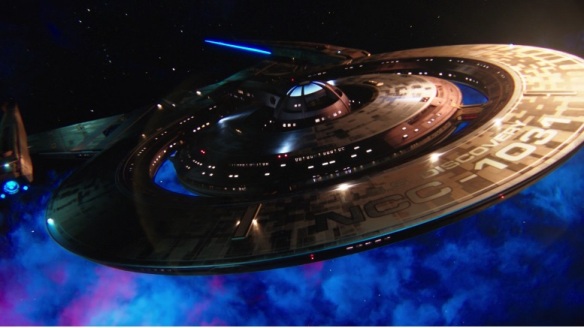 But as a one-off thing, there’s something warmly nostalgic about a cheesy, old school bottle episode. I don’t want all — or even most — of Discovery’s episodes to be like this, but I see “Magic to Make the Sanest Man Go Mad” as kind of a love note to Star Trek’s past, and seen through that lens, there’s something strangely charming about it.

Also, Anthony Rapp continues to be by far the best of this series. Gods Stamets is so much fun.

While there are a lot of things that could be criticized about this episode, there are only a few things about it that strongly bother me.

One is the ending, which makes no sense at all. I don’t know what more I can say without violating my admittedly ill-defined spoiler policy. It’s just dumb.

The other is that while Stamets is the only one who knows what’s going on, somehow this still turns into Burnham saving the day again. I know she’s the main character and all, but does she need to steal the spotlight from everyone else every single time?

Well, at least she does get to be pretty badass.

And it’s a bit strange there’s no reaction at all to the admiral’s abduction from last episode.