I once again find myself with a number of gaming topics to cover that are not quite big enough to deserve their own posts. Today, we’ll be visiting the Nexus, Tamriel, and Middle-Earth. 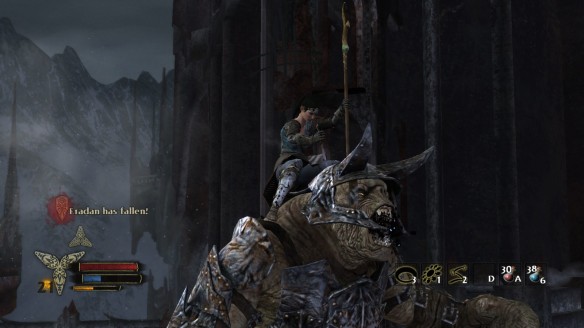 This month saw the release of Heroes of the Storm’s wackiest hero yet, Cho’Gall. Played by two players at once, he brings twice the power of any other hero, at the cost of leaving his team a man short.

His release was also unique, with a handful of players getting him for free, and everyone else able to unlock him by partying with an owner and piloting a head for a few games. Those who already had Cho’Gall could earn gold by spreading the “virus” to more players.

Motivated by the lure of extra gold — or perhaps feeling masochistic — I waded into the depths of the Heroes community to acquire Cho’Gall, share him with enough people to earn my 2K gold, and level both heads to level five.

To be fair, it wasn’t quite the horror show I expected. Gall is pretty much the same as playing a hat-build Abathur — which I do with some frequency — and Cho is mostly just a standard warrior with a guaranteed pocket DPS. And I only encountered one prick while grouping with people.

Not sure how I feel about him on the whole. I’ve heard lots of people say he isn’t that competitive. My knee-jerk reaction was that he was very overpowered, but I’ve softened on that. Truth is probably somewhere in between.

It really depends on the players. A bad Cho’Gall can ruin its team, but a good one is absolutely terrifying. Gall’s damage is absurd, and a good Cho will almost never die.

If nothing else, he’s damned annoying to play against. He’s a nightmare to deal with in the early game, and he has few obvious counters other than Leoric and to a lesser extent Kharazim (who must give up his better ultimate to serve as a counter).

Props to whoever came up with the idea of smashing together the names of his two players, though.

Slightly more recently, Heroes also added its latest map, and this one is a home run. Towers of Doom is very much not like any other map added to date, and although it’s a bit early to say for sure, it might be my new favourite.

For a while, map design was starting to feel a little stale, with pretty much all map mechanics being variations on a few themes. Towers of Doom still has some familiar elements — fighting over altars is much like trying to capture tributes on Cursed Hollow — but there are some key differences.

The mechanics of every map to date have been designed to help with pushing in some way. They help you destroy forts, and eventually the enemy core. Towers of Doom’s mechanic targets the core alone, and cores cannot be attacked by any other means.

This is a refreshing change of pace in a lot of ways, but the most important difference is that winning a map objective does not generally give you any significant XP lead, so there’s much less snowballing than on any other map. This makes an already volatile game even more unpredictable, and comebacks can never be ruled out.

It’s also a very well-balanced map in terms of what roles are required. Most maps will tend to focus on team-fighting or on more traditional laning and pushing, but Towers of Doom has room for both. You need to win team fights over the altars, but destroying enemy bases to claim their bell towers is also very helpful.

The fact that towns don’t stay destroyed further combats snowballing and makes the map even more back and forth. If you’ve lost some forts, you can always reclaim them and/or steal some enemy forts.

I also love the idea of bringing back the announcers from previous maps — in this case Cursed Hollow and Haunted Mines — to battle against each other. Especially since those are both two very colourful and amusing characters.

Though I must admit to being a little sad every time I don’t end up on the Raven Lord’s side. You’re cool, too, Grave Keeper, but the Raven Lord is just so suave.

My only little complaint about all this is their decision to retire maps — at least temporarily — to prevent the map pool from becoming too bloated. I don’t understand why they don’t just let us blacklist one or more maps — that seems much better than the developers deciding for us what maps we can and can’t play on.

If I never see Dragon Shire again, it will be too soon.

I continue to inch through Elder Scrolls Online at what I will generously call a snail’s pace, due to a combination of being frequently distracted by other things and the fact it’s a very slow game to progress in to begin with.

For the most part my opinion of it remains the same: It’s a solid but not stellar game. I remain somewhat unsure whether it will be something I stick with long term. It’s got a lot going for it, but I’ve yet to be blown away, and it has a lot of competition for my time. 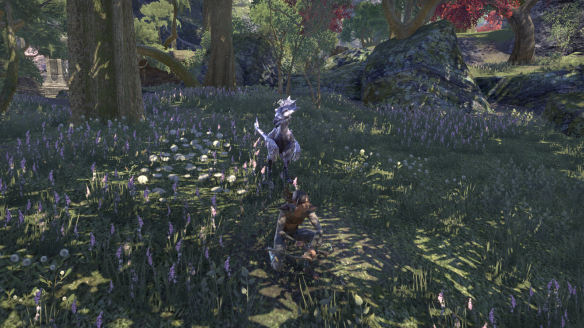 I have managed to finish the first zone, earn my mount, and unlock weapon swapping. The latter two things have had a very pronounced positive effect on my experience, which leads me to wonder why they take so damn long to unlock. The mount, in particular, took about twice as long to unlock as it would in your average MMO, and frankly I think the average wait time is a bit much.

I’ve yet to see much evidence of the supposedly high quality storytelling this game boasts, but there was one quest that impressed. It was very disturbing, but very well done.

It involved what amounted to a residential school for Bosmer and Khajiit. Uncovering all the abuses suffered by the “students” was a pretty unnerving experience, especially given the history of my own nation. I did quite enjoy the opportunity to bring justice to the perpetrators in the end.

The whole “High Elves are racists” theme was prevalent throughout the Aldmeri starting zone, but it was mostly a very sanitized video game version of racism. This was the only quest to show the terrible results of bigotry, and it did so very effectively.

Also, as half-hearted as the whole racism story was, I also liked the game’s complete and utter disrespect for those who hold such attitudes, particularly Razum-dar’s insistence on simply calling them “idiots.”

I really hope I haven’t see the last of Razum-dar.

Generally I find this game’s writing fairly mediocre, but this is one of the more poignant pieces of dialogue I’ve seen in a video game.

I’ll also say I do enjoy this game’s eye for detail. I really like all these little stories that play out in your letters from the crafting hirelings (pro tip: Don’t **** with Pacrooti), and there are other small touches. The other day an NPC guard randomly complimented me on one of my heroic actions — which happened weeks ago in an entirely different zone.

War in the North: It’s okay, I guess?

Finally, I’ve also been working on getting through at least some of the backlog of games I’ve developed on my Steam account, starting with Lord of the Rings: War in the North.

I thought about doing a full review of it, but I don’t think I’ve got enough to say on the matter.

It’s not a terrible game, but I’m not sure I’d recommend it. It is, at best, adequate.

Despite an admiral effort at telling a new story in Middle-Earth while staying true to the books, there just isn’t much in the way of a story, nor are any of the characters developed enough to be interesting. Mostly it’s just an excuse to wander around decapitating Orcs.

On the plus side, you get to wander around decapitating Orcs.

The combat is mostly quite visceral and fun, but it can also get rather frustrating in certain spots. A lot of high level enemies pretty much just chain-stun you endlessly, which gets incredibly aggravating after a while. 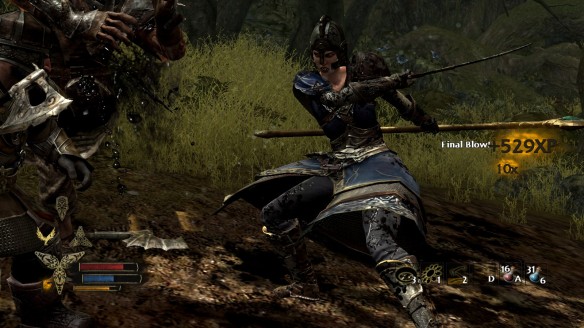 Ultimately the main thing I liked was simply the character I chose to play as: an Elven battle-mage. I do love playing a spell caster who can wade into the fray and get their hands dirty. Plus she was voiced by Laura Bailey, which is always plus.

I’ll also give the game some credit for making its female armour actual armour.

4 thoughts on “Gaming Round-Up: Cho’Gall, Towers of Doom, ESO, and War in the North”