I love Stargate: Universe. If you’re a regular reader, you probably know it’s one of my favourite shows of all time. Its premature cancellation left a hole in my heart that’s never quite been filled. 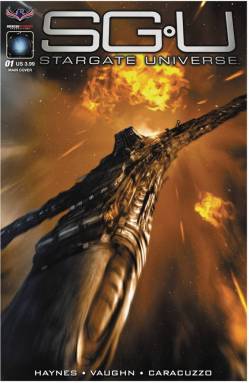 When it was announced the series would continue in a series of canonical comics, my feelings were decidedly mixed. I want to cheer any continuation of Universe, but I’m not a big comics reader, and it’s not the same without the fantastic performances of actors like Robert Carlyle and Louis Ferreira. More worryingly, the comics would not be written by the same people who brought us SG:U, nor would they follow the long-term series plan created by Robert Cooper.

Still, while strolling through Indigo, my eyes landed on a compilation of the first six issues of the comics, and I couldn’t contain my curiosity.

It was a decidedly mixed experience.

The one thing the comics do very well is capture the characters. They’re all immediately recognizable as their old selves. Rush is still a shifty bastard, Eli is still a lovable dork, and Colonel Young is the gruff father figure we all know and love. Even their speech patterns have been captured perfectly. I was constantly hearing the actors’ voices in my head as I was reading.

The good news, sadly, pretty much ends there.

This is basically Deus Ex Machina: The Series. It’s just an endless spree of incredibly lucky breaks for the Destiny and its crew. If that sounds out of character for SG:U, congratulations, you’ve seen at least one episode of the series. The tone is just way off, and the end result is the removal of much of the struggle that made Universe special as a story.

What makes this even more egregious is that the story doesn’t really advance any other way. We learn nothing new about the mysteries of the Destiny or its mission. The eternally rushed comic book medium doesn’t have space to develop the relationships and character arcs that were so memorable on the show. The entire focus is on the festival of deus ex machinas.

These comics are the brainchild of writers who previously worked on Stargate: Atlantis, and honestly, I can’t escape the impression that their main goal was to turn Universe into Atlantis so they’d be back on familiar ground.

I’m a fan of Atlantis, too, but what made Universe special was that it broke new ground. It had its own character that was separate from the other incarnations of Stargate. The writers of these comics either don’t understand or don’t appreciate that, and for that reason I don’t think I can give the comics a recommendation, much as I wish it were otherwise.