I almost didn’t bother seeing this movie. The various controversies surrounding the film, and especially Johnny Depp, left a very sour taste in my mouth, and I started to feel as if paying to watch it would be a violation of my own values. 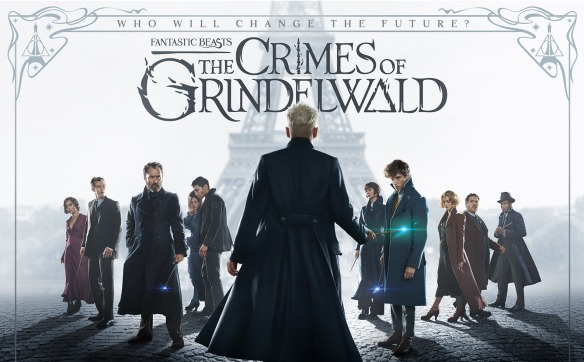 But perhaps my values aren’t so ironclad, because here we are. Hey, I loved the original.

In an attempt to balance my karma and/or assuage my guilty conscience, I did make a $10 donation to the North York Women’s Shelter. If anyone else is feeling similarly conflicted, I’d recommend making a similar donation to a charity in their community.

Anyway, on to the movie.

As I said above, I was very impressed by the last Fantastic Beasts movie. It provided a surprisingly dark and powerful tale with far more depth than I anticipated. Crimes of Grindelwald is perhaps not quite so impressive, but I still enjoyed it.

Once again, my expectations were defied. With a title like “Crimes of Grindelwald,” I was expecting an action-packed, Empire Strikes Back style tour de force. Instead, the experience is much more introspective and character-driven.

The theme of Crimes seems to be the wizarding world choosing sides. Grindelwald is marshaling his army, and people must choose to either stand with him, or against him. This takes place both on a grand, societal scale and a more intimate scale as the cast — including all the main characters from last time plus a few new faces — also must begin to take sides.

I don’t want to say too much, but you should expect to be surprised by how some characters choose to place their loyalties. I sure as hell was.

On the one hand, every character is once again excellent, both in terms of writing and acting. Even Newt’s started to grow on me.

Much as it leaves a bitter taste in my mouth, I must give special praise to Johnny Depp, who absolutely nails Grindelwald’s dark charisma. The cartoonish evil of Voldemort this is not; as sinister as he is, Grindelwald is a man I can believe people would want to follow.

However, there is a downside. The cast has become quite bloated. On top of all the characters from the first movie, quite a number of new ones have been added, and while they’re also good characters played by talented actors, there just isn’t enough time in the movie to give every character their due. It’s spread too thin.

As a devoted Tina fanboy, I was particularly distressed by how small her role in this movie was. She’s hardly there, and she doesn’t contribute anything of value to the story. Honestly, she doesn’t need to be included at all. It would be almost exactly the same movie without her.

Aside from that issue, though, Crimes of Grindelwald is another surprisingly dark and thoughtful movie that is worth your time if your morals are as evidently flexible as mine.