The first Warcraft game came out in 1994, when I was four years old (though I think I may have been five by the time I got around to playing it). Over the next twenty years and more, the story that began there has continued, through games, books, comics, audio dramas, and even a movie. I’ve been there (nearly) every step of the way. 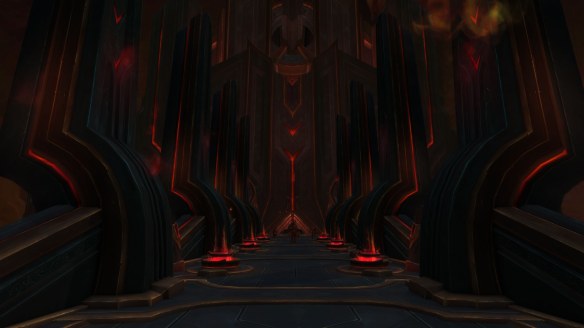 And by and large, that story was the story of the Burning Legion. Even when the demons and their fel magic were not the central theme, it all tied back to them one way or another.

Now, with the release of Antorus, the Burning Throne, the story of the Burning Legion has at last come to an end, and I can’t escape the feeling that this is also the end of Warcraft… or at least Warcraft as we know it.

Yes, recent plot revelations make the Void arguably the greater threat, but it just doesn’t carry the same weight of history the Legion does. Over the years, if I ever pictured a final conclusion to the story of Warcraft, I pictured a final glorious confrontation with Sargeras and his Burning Crusade.

I say all this to give you an idea of just how much of my life this story has been, and how surreal it is to finally see its end. In so much as an entertainment product can be, the release of Antorus is a Major Event in my life.

Fair warning: This post will contain copious spoilers for Antorus and all that follows. 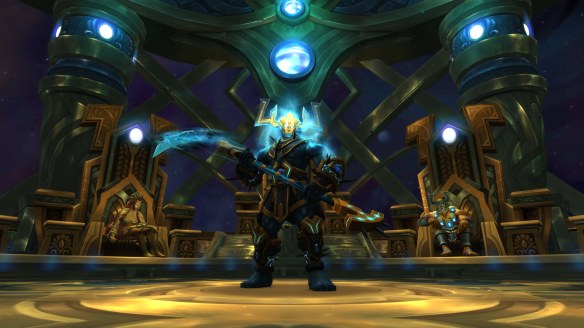 There’s a lot I like about Antorus, and I don’t want to send the impression that my view of it is entirely or even mostly negative, but if I’m being honest, it did leave me a bit disappointed.

One problem is that over the course of Legion we’ve already fought and killed pretty much everyone who was anyone within the Burning Legion. So most of Antorus is just taken up by fighting no-name demons who feel like filler. Varimathras is really the only big name here, and without his original voice actor, he just doesn’t feel the same.

Things do get a lot more interesting in the later parts of the raid, where the story shifts focus to the Titans. But the trouble there is that it’s a good story… but about 90% of it happens off camera.

For instance, there’s no explanation of how the Titans’ souls wound up in Antorus. Last we heard, they were on Azeroth.

Now, the Legion has been running roughshod over Azeroth for months now, so it’s not exactly far-fetched that they could have grabbed the Titans’ souls somewhere along the line. But it just seems like that’s a story that would have been worth telling.

I’m especially curious what happened to Wrathion, since he was (implied to be) the current host for Aman’thul’s spirit. Did they kill him?

I also don’t understand how the Titans suddenly resurrected themselves, or how they were able to defeat Sargeras. Last time he fought them, he was able to kill them all himself, and that’s when they were at full power.

It’s also a bit of a shame to see the Titans so scaled down. They’re living planets, and they’re supposed to have the size to match. I realize there’s no possible way that could have been made to work in a game like this, but it just doesn’t feel right to be fighting Aggramar and have him be “only” forty feet tall.

On the plus side, I love the idea of using a twisted version of Titan architecture for the deeper parts of Antorus. Because of course Sargeras isn’t a demon; he’s a Titan. His inner sanctum would reflect that. It’s not something I ever would have thought of myself, but it makes perfect sense.

Also, the final fight against Argus the Unmaker is glorious. One of the absolute most mind-bending, crazy, over the top boss fights I’ve ever seen in a video game. Even on Raid Finder difficulty, it’s incredibly intense, and it does feel like a worthy end to the epic saga of the Burning Legion.

Taken all in all… I honestly still don’t know how to feel about Antorus, and the Legion’s end. There’s good, there’s bad, and there’s a mountain of expectation and history to overcome. It’s hard to process.

Your crusade is over:

What I actually liked a lot more than Antorus was the quest that immediately follows, wherein you deliver Illidan’s last words to his brother and Tyrande. It’s very a personal, touching moment, and it’s the sort of things video games could really use more of.

Both of them seem rather unfairly harsh to Illidan, but then they always have been. Being misunderstood is kind of his thing.

I am very glad Illidan finally got the heroic end he deserves.

On the other hand, the quests in Silithus are crushingly depressing. Not even in an enjoyable “beautifully tragic” sort of way, like the Crusader Bridenbrad storyline. Just in a “I don’t even care anymore” sort of way. Even Khadgar seems to have been broken by it all.

And yes, it does seem clear that Horde players are going to be forced to be evil whether we like it or not once again. At least with Garrosh, it was clear from the start that there was dissent within the ranks. Now everyone seems perfectly fine with being cartoonishly villainous.

Also, did they seriously replace Saurfang’s voice actor? That level of heresy is simply unforgivable.

This only increases my growing conviction that it may be time to move on from WoW after Legion. The story is not going anywhere I like, and flawed though it may have been, I don’t see how they can ever top Antorus.

We just fought and defeated a living planet. There is nowhere to go from here but down.