I’ve been pretty diligent about blogging on the various class stories in World of Warcraft as I’ve completed them, but along the way I’ve neglected to talk about the rest of my adventures in Azeroth. It’s time to rectify that, so without further ado, I present you my thoughts on the Tomb of Sargeras, Argus, and more.

If you’re not up to date on the 7.2 and 7.3 content that’s currently been released, here be spoilers.

When you think about it, it’s pretty strange it’s taken so long for the Tomb of Sargeras to appear in WoW, isn’t it? It’s been an important location in Warcraft lore since the 90s.

Anyway, it’s a good raid. I like it. It’s the first raid I’ve done in a long time that feels truly epic and important, and it’s got a lot of fun boss fights.

I was a mixed on Kil’jaeden being a mid-tier boss. He’s the sort of character who’s usually reserved for an end of expansion encounter, and even then, I’ve spent a long time thinking we players should never have the chance to defeat him (Sunwell doesn’t count since he hadn’t even fully entered Azeroth).

But his fight does feel suitably epic and intense, and I realized that I was still thinking of the old Kil’jaeden, the one from before the great Draenei retcon that blew up lore as we knew it. 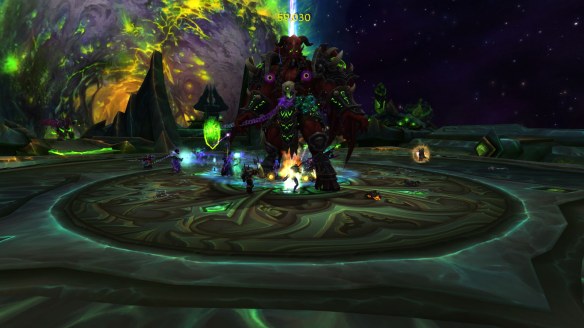 He used to be this immortal avatar of evil, the personification of darkness itself. But after the retcon, he’s now just another warlock. An ancient and unusually powerful warlock, yes, but still, just a warlock. He’s not the legendary figure he once was.

So I guess it’s okay for him to be ganked by a gaggle of random mortals halfway through an expansion.

His death cinematic and the reveal of Argus was great, too, though I wish they hadn’t gone through with sticking Argus in the sky for everyone even if they haven’t done the fight yet. Rather spoiled the reveal.

Mind you, it’s impossible to ever avoid spoilers where WoW is concerned. No one in the community — including the devs themselves — has any respect for that sort of thing.

The hand of fate:

Due in large part to my enmity for the Draenei, the seemingly inevitable journey to Argus is something I’ve long-dreaded. I remain relieved that it’s merely a patch and not a full expansion.

As I’ve played through it, I’ve gone back and forth on my feelings on it.

The defeat of the Burning Legion is not something I ever expected or wanted to see, but it does seem increasingly likely that’s where we’re headed. The whole appeal of the Legion was that they were nigh-unstoppable. You could fend them off — you could save your world — but you could never hope to end their threat entirely.

But now we’re invading their home turf, and it looks like the Legion will soon be a thing of the past.

I was also initially bothered by how many non-Legion Eredar — Broken and Army of the Light alike — have apparently survived and continued fighting the Legion all this time.

I can think of no better symbol of how utterly the Legion has been defanged. They were introduced as the end of all life, and now it turns out they couldn’t even stamp out all resistance on the world that is their base of operations. They’re not very good at this, are they?

But then I realized that the Legion has been neutered for a long time now. I keep wanting them to be as terrifying as they were in Warcraft III, but the fact is that ship has sailed.

When I consider the damage that’s been done to the Legion’s lore over the years, Argus is about making the best of a bad situation. Seen through that lens, it’s doing a very good job, and if you let go of the Legion as the Ultimate Threat and view it simply as a threat, it’s actually a great ride.

Argus is a scary place. The mobs are pretty tough by WoW’s meager standards, there are elites and mini-bosses everywhere, the environments are hellish, and overall you really do get the impression that this entire planet wants to kill you. It’s one of those places where you feel like a complete badass just for setting foot there, and I haven’t gotten that feeling this strongly since Icecrown.

I’ve heard some people say that Argus is a pain to navigate, and that’s probably true for someone who can’t double jump and glide, but I brought my demon hunter there, and for her, Argus is a playground. I can get almost anywhere by finding a cliff and gliding. It’s wonderful.

Right now, the place is teeming with players, so there’s a great “D-Day” feel to the place, too. This is definitely one of those moments where I’m glad to play MMOs. Single-player games just don’t capture quite the same feeling, no matter how many NPCs you cram in.

I’ve enjoyed the story, as well. Even the Draenei stuff, mostly.

It probably doesn’t hurt that Argus paints the Draenei in an incredibly bad light. Now that we know many of their people stayed behind to fight, the Draenei are no longer these saintly embodiments of all goodness and virtue. Suddenly we realize they’re the deserters who left their friends and family to die. Dare I say, do the Draenei have nuance now?

I was a bit suspicious around the reintroduction of Turalyon and Alleria, given how forced Khadgar’s sudden return to the spotlight has felt, but whacky timeline issues aside, I’m finding their stories very intriguing (especially Alleria’s, not surprisingly).

The most interesting thing is that I get the distinct impression their story doesn’t end with Legion’s. In fact, it seems like it’s just getting started…

I just hope Alleria doesn’t wind up too anti-Horde. I mean, historically, she’s been extremely anti-Horde, so it would make sense, but I’d like at least one Windrunner sister to find a place among the Blood Elves. It’s hard for me to get over Vereesa betraying her own people, and whatever Sylvanas may have been in life, it’s clear she no longer feels any loyalty to Quel’thalas.

Overall, I’m feeling pretty happy with Argus, and in fact I’m probably more content with WoW now than I have been in a very long time. 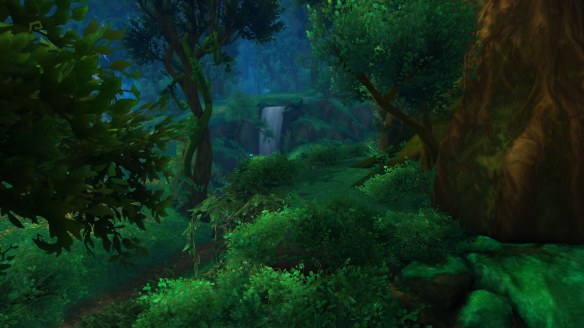 Few other random things to note.

As I’ve mentioned before, I’m very underwhelmed by the soundtrack in the two most recent WoW expansions. This is a shame because the music used to be a huge part of the game’s appeal for me.

Somewhere along the line it occurred to me to wonder if there was an add-on that could customize the in-game soundtrack. Turns out there are several. I picked Epic Music Player. You can use it to import your own music, but I’ve been content to just play with the existing WoW soundtrack, which is all pre-loaded into the add-on.

I set up customized play-lists for each Legion zone, drawing on my favourite tracks from Wrath of the Lich King, Cataclysm, and Mists of Pandaria, plus some of the better Legion songs. These playlists activate automatically as soon as I enter the corresponding zone.

It’s done wonders for my enjoyment of the expansion, honestly. It’s amazing what a difference a good soundtrack could make.

In other news, I’ve gotten some interesting cosmetics recently.

I’m not much of a mount collector, and while the grind to unlock them is relatively tame, I haven’t the patience to get every single class mount. But as you can see, I did decide to grab the paladin class mount on the grounds that it’s gorgeous (I’ve already had the raven mount for rogues for a while, and I love it).

I especially like the red and grey tint for the paladin mount, as it matches my transmog very well. It leaves silver hoofprints when it runs. It’s lovely.

Also on the subject of mounts, I finally pulled the trigger and got myself the Grand Expedition Yak from Pandaria. It costs almost as much as a full WoW Token, but being able to access a vendor or change my outfit anywhere in the game is a wonderful convenience.

And the Grummles amuse me. It seems very surreal running through the horrors of Argus with the little guys. “WHERE IS YOUR LUCKYDO NOW?”

Finally, as a PSA, it seems the drop rates for many hidden artifact appearances were greatly increased in 7.3. Did someone say…

…Thunderfury, Hallowed Blade of the Windlord?