When I tried The Division’s beta last year, I knew I would end up buying it sooner or later. It was just a question of when. A recent Steam sale coupled with a lull in other major gaming projects to pursue provided the perfect storm of conditions to finally pony up and get the full version.

The Division is a strange game. I went into the beta expecting very little and came out enjoying it far more than expected, but now that I’ve bought the full game, I question whether I made the right choice.

Everything that I initially liked about The Division holds true. It is a game that does some things very well, and overall is rather charming.

Its best feature by far is its attention to detail. The Division’s vision of a ruined New York is spectacularly detailed, incredibly well thought-out, and beautifully realized. The graphics are stunning, and the game design is solid, providing an excellent formula of exploration.

The game is empty enough to sell the loneliness of a dead city, but not so empty as to become boring. There’s always something neat to find, be it loot, missions, lore, or just a cool set piece.

Cell phone recordings reveal haunting slices of life from those who died in the outbreak. Storms roll in, dusting your character with snow and cutting visibility down to virtually nothing. Distant gunfire rattles the otherwise tomb-like stillness of the city. 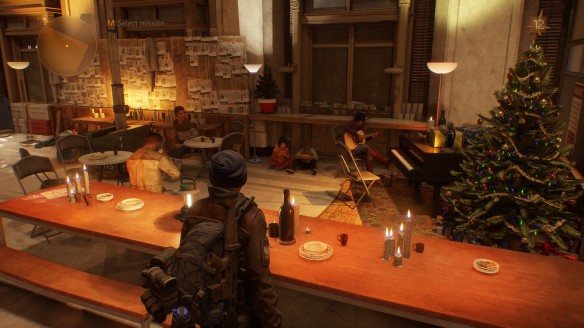 An early mission has you rescuing the sister, a musician, of one of your fellow Division agents. Much later on, I stumbled across the sister in the base of operations, strumming on her guitar for an audience of refugee children. It was an incredibly charming scene, and somehow far more satisfying of a quest reward than XP or loot could ever be.

“Immersion” has become almost as much a buzzword as “epic” these days, but it’s still a valid concept, and The Division has it in spades.

And yet I already myself struggling to find motivation to log in, to the point where writing this post seemed a significantly more appealing prospect than actually playing. Why?

Certainly The Division does have problems. The actual main plot of the game is underwhelming at best, from both a story and a gameplay perspective.

While it may become more interesting later on, so far the main story has been quite simplistic — terrorist attack, yada yada — and it’s just not written very well.

The dialogue is so cartoony and ridiculous it almost achieves a sort of kitschy, “so bad it’s good” charm. It’s hard to believe it comes from the same game as the achingly real recordings you find while exploring, or even the goofy but fun NPCs who deliver your side missions.

The main story missions also aren’t that fun to play. As I noticed in the beta, the difficulty is oddly tuned. I don’t think you’re meant to solo the main story, which is an incredibly strange decision in a game that otherwise seems to hew closer to a single-player game than an MMO (while obviously having elements of both).

I don’t like being pressured into things, though, so I’ve stubbornly continued to solo the main missions, frustrating as it can be at times. It’d be fine if player characters in this game weren’t so squishy, but your incredibly low health pool severely punishes the slightest error.

You can mitigate the issue a bit by outleveling the missions via side content, but as much as I enjoy the side missions in The Division (much more so than I usually do), it doesn’t feel good to do them because you have to, and it detracts from what could otherwise have been a pretty solid sandbox-ish experience.

There are also smaller hiccups. The Division may well have the worst character customization of any game I’ve ever played, and I’ve been gaming for twenty years. The options are shockingly limited, and made even more so by the incomprehensible decision to tie certain options together. For example, only about half the female faces can have ponytails.

Your guess is as good as mine.

Even with my relatively small amount of time in the game, and even playing entirely solo, I’ve still managed to find someone who was pretty much my character’s exact doppleganger, minus only the lip piercing I gave her in a vain attempt to inject some personality into my avatar.

I think the idea is you’re meant to rely on clothing to make your character stand out. TSW had a similar philosophy, and I don’t hate the idea, but in this case, it doesn’t work as well as it could.

There are a lot of clothing pieces in The Division, but there isn’t that much difference between them. The game clearly tried very hard to make them all realistic choices for the setting. I’m torn because I really admire the commitment to verisimilitude, but it also means that your choices are pretty much down to what colour of winter jacket and pants you want to wear.

Less than the sum of its parts:

Still, none of these seem like crippling flaws. I’ve been able to overlook bigger issues with games. So why am I losing interest in The Division so quickly?

I don’t know. It’s not even that I’m not enjoying myself. It’s fundamentally a good game to play. But I just find that my motivation to keep going is rapidly dwindling. 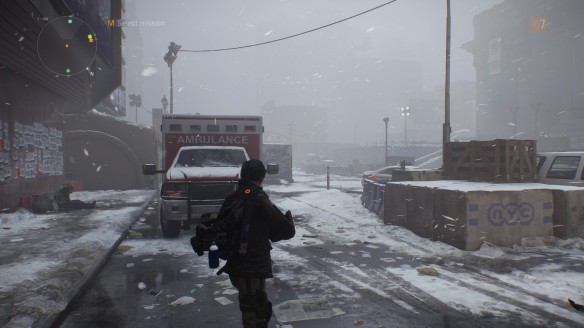 Even if this is the end, I don’t necessarily regret buying the game. I maybe should have waited for a better discount, but I did get at least a few good hours out of it. I explored a lot more than I was able to in beta, and I generally had a good time.

One final note before I go: I was deeply amused to discover that the very first safehouse you’re sent to is actually Illuminati headquarters. Both The Division and The Secret World replicated the same neighbourhood of New York, and the first safehouse is in the exact same building as the entrance to the Labyrinth.

There’s even some blue pyramid graffiti in the area. I kind of wonder if one of the environment artists was a TSW player…

1 thought on “The Division Revisited”