“I fear no enemy, for the Khala is my strength. I fear not death, for our strength is eternal.”

After a minor content drought, StarCraft II has come roaring back with a big update to co-op. The star attraction is a new commander, Fenix.

Well, sort of. It’s not really Fenix; it’s Talandar. But the name “Fenix” is more recognized, so I guess it makes sense that’s what they went with, even if it gives us lore fans eye twitches. Either way, he still captures the essence of the OG Protoss badass.

I had hoped for Selendis next, but I can’t say I’m heartbroken by Fenix. A proper Purifier commander without Karax’s baggage is very welcome.

He’s got some interesting mechanics, too. His theme is around downloading AI consciousnesses between various bodies, which confirms with certainty that Purifiers are Protoss Cylons.

Fenix himself can swap between three bodies at will. Each has their own unique stats and abilities, but they only regenerate health and energy when they aren’t deployed, so you have to swap them out regularly.

Probably a good thing, too, because otherwise I’d never use anything but the Dragoon body. That thing’s damage is nuts.

Fenix can also call upon AI champions based on the personas of legendary heroes from throughout Protoss history. The champion will inhabit the body of one your units, greatly increasing their stats and granting new abilities. If a champion is killed, it will transfer to another unit of the same time at no cost. So you basically can’t ever lose them.

Each of these is an actual character from within the lore, though some are sufficiently obscure even I barely know who they are. The biggest name is probably Kaldalis, the Ahkundelar champion featured in Reclamation and the Legacy of the Void cinematic.

Unfortunately, they didn’t bring back any of the original voice actors, so Kaldalis, for example, still sounds like a regular Zealot. I realize it’d be a lot of investment for just one commander, but it would have been cool.

They did put a lot of work into his visuals, though. Not only does he have all-new Purifier skins for all his buildings and units, but even a unique UI, which is a first.

I’m still pretty low level, but my initial impressions of Fenix are positive. He’s not as overpowered as he seemed from the initial previews, but he is pretty strong. Like Nova, he’s very versatile, with many viable builds and no obvious weaknesses. 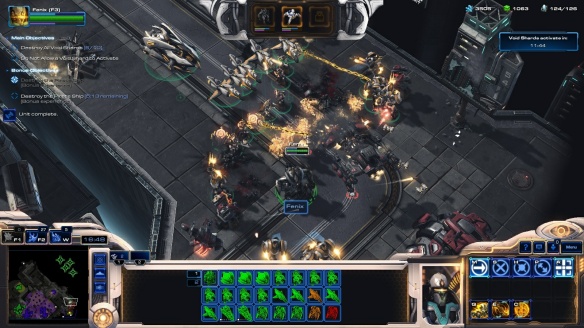 Similarly, he’s probably not going to be my favourite commander, but he is pretty fun. He has a lot of my favourite Protoss units that were either missing or consigned to Karax: Adepts, Scouts, Colossi, Carriers.

I’m sure it’s not the most efficient strategy, but I’ve been having a lot of fun just going for mass infantry. I love the aesthetics of the Protoss warriors (or reasonable facsimiles thereof) heroically charging into battle with Fenix at their head.

My only real concern is that Fenix may be the last Protoss commander to be added. I can’t really imagine what’s left to do with the race at this point, which is a shame because I still want to see Selendis get some love.

The map’s been getting a lot of criticism for being so similar to Rifts to Korhal, which it definitely is. Go around, kill Void Slivers, and beat the time limit. The bonus objective is an escort mission, with all the annoyance that entails, which doesn’t help, either. 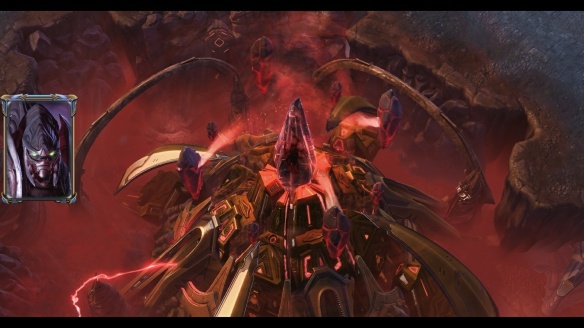 That said, there are a few things that make it a bit more interesting than Rifts to Korhal. The time limit is tighter, making it more challenging. You have more choice in what order to tackle the objectives in. You have enemy forces of all three races. The Slivers have more diverse and deadly attacks to avoid.

So really it’s an improved version of Rifts to Korhal. If Rifts didn’t already exist, it probably would have been received much better.

It’s very pretty, too. The lighting and rain effects are gorgeous.

Finally, Blizzard has at long last enabled custom team colours in co-op. It’s the same system as in ladder, meaning it requires some tinkering in the depths of the options menu and then hitting a button next to the mini-map in-game to work, and your ally won’t see what you’ve picked, but it’s still a lot better than just being blue or orange every single game.

I’ve been trying to find the best colour for every commander. I highly recommend white for Fenix. It looks fantastic with the Purifier skins.