Thanks to iTunes’ scheduling (or lack thereof), I wound up having myself a mini-marathon of Dark Matter, so instead of one episode review, today I bring you two.

“Stuff to Steal, People to Kill”:

And again, that title game is on point.

After the blink drive’s malfunction from the previous episode, the Raza crew takes going off course to entirely new heights, as they arrive a few light years and an entire universe away from where they intended to be.

Yup, it’s parallel universe time. And of course it’s an evil universe. Add some extra goatees and a Terran Empire logo or two, and this could easily have been one of Star Trek’s Mirror Universe episodes.

It’s also an opportunity to bring back some old… I can’t even call them friends ironically.

This is a bit of a departure for Dark Matter, which usually keeps its sci-fi elements relatively subtle. The good news is that the focus remains on the action and the characters, not on rampant technobabble.

“Stuff to Steal, People to Kill” is a very fun, very exciting episode, but it does feel just a little empty. It doesn’t do a lot to advance the story, save possibly introducing yet more villains to contend with, and there isn’t a lot of character development or feeling to be had. 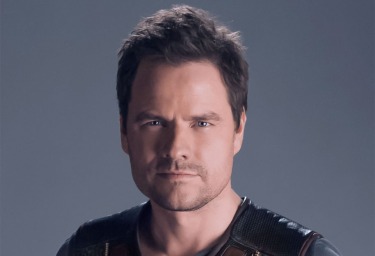 Also, if you’re going to bring back so many bad guys, can we see at least one of them die again? I’d have enjoyed that.

It’s not a bad episode, but it’s not one I’m going to be gushing over for weeks to come like some we’ve seen this season.

Something is terribly wrong with Two. Her nanites are failing, and she won’t be able to survive without them.

There’s only one place where answers and the hope for a cure can be found, and that means it’s time for the crew of the Raza to pay another visit to the good people at Dwarf Star Technologies.

But Alex Rook and his people are waiting for them.

There’s also a surprise appearance by what appears to be the Zero Point Pathogen and/or Venom.

“Going Out Fighting” is pretty much what we’ve come to expect from Dark Matter at this point: fun, exciting, a little tension, a little humour. This show is nothing if not consistent.

But there are a few things about this episode that stand out, for better and for worse. Two things in particular bother me.

The first is that Wil Wheaton is still just Wil Wheaton. He’s not convincing or intimidating as a villain.

The other is that, after so long without hearing from Dwarf Star, I was expecting to finally get some answers about who they are and what they’re up to. They are, after all, one of the bigger question marks of the Dark Matter universe right now.

But there’s none of that. If anything we’re now left with even more questions — like how they got a hold of the Filth. The view of Dark Matter as some weird, alternate universe, far future version of The Secret World is getting ever clearer.

However, there is one thing that I did very much enjoy about “Going Out Fighting” — and that more than compensates for its flaws — and that’s seeing the fellowship that has developed between the Raza crew. I absolutely love the scene where Two looks to each of the crew members, and they’re all able to convey that they’ll risk their lives to save her, without saying anything.

This kind of devotion wouldn’t have been at all believable in the first season, with its endless suspicion, but over time the bonds between the team have grown. “Going Out Fighting” is an excellent symbol of just how far they’ve come.

It’s a lovely thing to see.

4 thoughts on “Reviews: Dark Matter, “Stuff to Steal, People to Kill” and “Going Out Fighting””