Over my past two posts on the so-called “holy trinity” of group roles in MMORPGs, I’ve discussed my problems with the trinity, and some of the good times I’ve had outside the traditional role system. 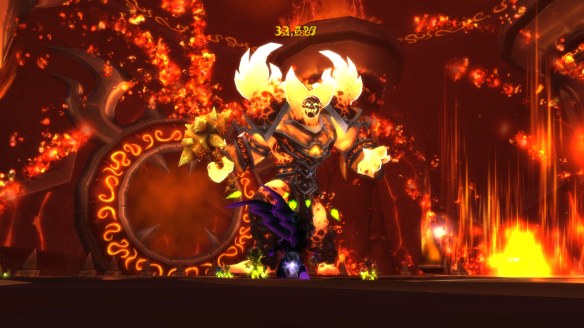 Now, we reach the end of this long journey as I outline my personal plan for how to “fix” the trinity.

For some crazy reason I decided to do all three of these posts at once. It’s well after midnight, we’re approaching hour three, my fingers are sore, and my brain is fuzzy, but Hell, let’s do this.

I was hesitant to do this for a very long time because I don’t like playing armchair game designer. Well, actually, I like it a lot, but I don’t like the risk of being seduced by the idea that I actually know what I’m talking about, or giving anyone the idea I think I’m better than I am.

I am not a professional game designer. I know this. I’m not going to pretend I can do a better job than they can, because I can’t. This seems like a good idea to me, but what do I know?

And I really doubt anyone particularly wants to hear my pie-in-the-sky ideas for how games should be designed, hence why I haven’t done posts like this before now. But if I’m going to talk about the trinity, I think this is a necessary part of the discussion. 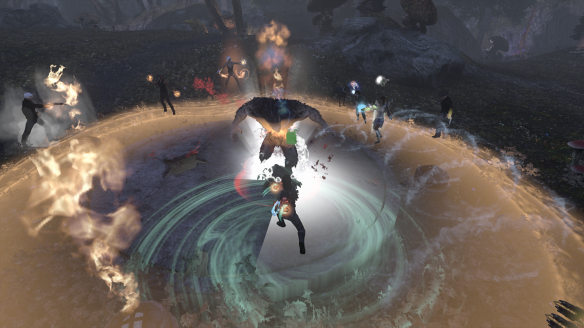 That said, this is a plan that I believe would solve most of the problems with the trinity while preserving much of its virtues. Your opinion may vary.

Unfortunately, Guild Wars 2 has become the poster child for trying to break the trinity. I say “unfortunately” because they did an awful job of it. Of all the games I’ve played with no trinity or a relaxed trinity, GW2 is the only one that fails to provide fun group dynamics. Ironic considering how much of a selling feature it was.

Things are supposedly a bit different now that raids are in, but at launch, Guild Wars 2 essentially eliminated tanks and healers. This solves some problems, but it also made pretty every class play mostly the same. It made a lot of things into mindless zergs, and combined with dungeon design that wasn’t sufficiently removed from that of trinity games, it was just broken as all Hell. 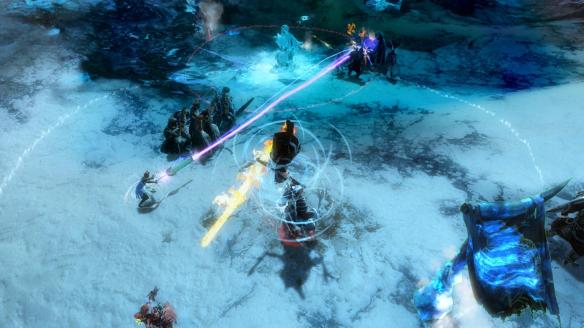 But there are lessons to take from Guild Wars 2’s failure. They were in the right neighbourhood, but they chose the run path.

You see, they got rid of the wrong roles. Tanks and healers are fine.

I say it’s DPS that needs to go.

Tyler, you want to delete the overwhelmingly most popular MMO role? The one you play the most? Are you high?

But think about it. There’s method to this madness.

Imagine what happens when DPS is no longer a dedicated role. You no longer need to tune healers and tanks to have lower damage. In a world where no one is a DPS, everyone is a DPS.

That immediately solves the problem of it sucking to solo as a tank or healer. 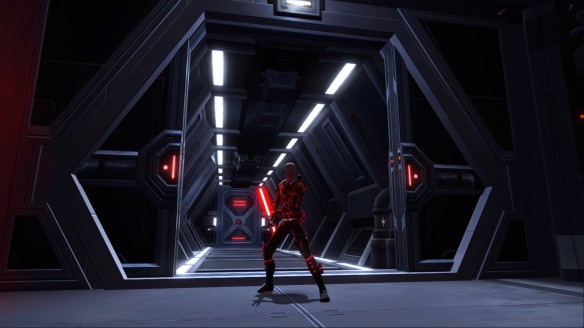 Then think about what group compositions look like in this hypothetical game where there are only two roles, not three. When you can only include tanks and healers in your group, the responsibility is much more shared.

This solves the problem of the disproportionate sharing of responsibility. It’s not just one tank and one healer. There’s several of each. That glorious double tank run I had in SW:TOR? That could be the norm.

In such a paradigm, if you screw up and get yourself killed as a tank, it wouldn’t be a guaranteed wipe. The other tank(s) would pick up the slack.

I don’t know about you, but that sounds tremendously appealing to me.

Similarly, this makes forming groups a lot easier. Tanks and healers obviously wouldn’t be a rarity, and in theory, such a system could be balanced to no require rigid party compositions. We’re getting far into the hypothetical here, but I think it could be the case that if you have more tanks, your party takes less damage and needs fewer healers, and if you have more healers, you can restore more damage and need fewer tanks.

This would necessitate softening both roles a bit. For example, healers couldn’t simply spam heals all day. They’d need to mix both heals and damage. 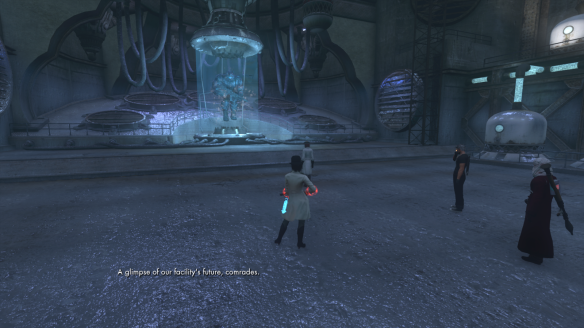 This would require slowing down the pace of both heals and damage. Not slowing combat altogether. You know me; even the standard 1.5 second global cooldown feels sluggish to me. But tanks don’t need to be losing half their health every few seconds. There should be time to recover from a mistake, and on the flip side recovery from bad play shouldn’t be one click a way. Healing is at its best when it’s a tug of war.

I’d put heals on cooldowns or otherwise limit them. Not heavily — healing should obviously be a core part of playing a healer. But it shouldn’t be all you do. Like the devoted cleric in Neverwinter, there should be a degree of adaptation based on the needs of the moment. Sometimes it’s about healing. Sometimes it’s about pouring on the damage.

I’d also like to see a little less emphasis on straight up healing and more on buffs and utility. I like The Secret World’s take on buffs — short duration, dramatic effect — and I’d like to see more of that.

So under my hypothetical design, healers would perhaps be more accurately described as support. They keep their parties afloat through a broad toolkit of heals, buffs, and damage.

As for tanks, I’d soften their role a bit, too. I’m not sure I’d do away with aggro mechanics altogether, but I don’t think tanks should be expected to hold aggro on everything all the time. I’d probably make taunts an emergency cooldown rather than a bread and butter ability. Combat need not be total anarchy, but there should be some unpredictability to it. 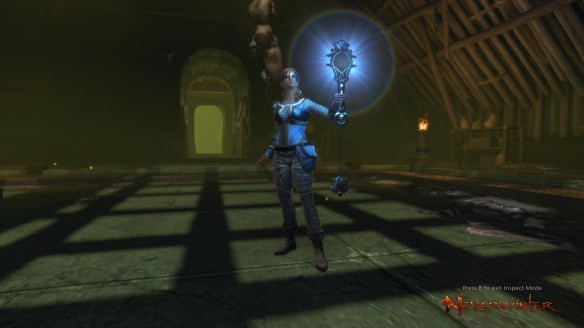 Slowing down incoming damage supports this, as well. With mobs delivering hits that aren’t so massive, healers (or supports) can take a few hits without collapsing, and combat can afford to be a little less carefully choreographed.

Aggro mechanics are one of those things about the trinity that are painfully artificial, so I’d put a greater emphasis on tanks controlling enemies directly through slows, stuns, pulls, knockbacks, and abilities that manipulate the battlefield. Let them physically impose their will on enemies.

By softening the roles this way, you’re providing everyone a broader experience of combat. Everyone is, one way or another, interacting with enemies, delivering big and satisfying attacks, and aiding their team in a crucial way. At the same time, distinct roles aren’t gone entirely. There’s choice and variety.

It even solves the realism issue to some extent. With multiple tanks, it’s at least somewhat plausible that they could hold off enemies from their weaker team mates. Not because Orcs are magnetically attracted to dudes in plate for some reason, but because they form a physical barrier around their allies. I think I could suspend my disbelief for that.

It’s probably not as simple as I’m making it out to be, but to me, a two-role system seems like an option that avoids the worst flaws of the trinity while still offering much of its benefits.

Thus concludes my epic series on the trinity. My duty as an MMO blogger is done. Agree or disagree, I hope I’ve at least provided some food for thought, or entertainment value.

While you’re reading epic rants on traditional MMO design by yours truly, why not check out my latest article on MMO Bro: The Case Against MMORPG Button Bloat.

7 thoughts on “Tyler Versus the MMO Trinity, Part Three: My Solution”