I’ve been pretty down on World of Warcraft lately. Burnout on my part and bad decisions on Blizzard’s part have combined to dredge up every problem I’ve ever had with WoW, and it’s a long list. If nothing else, there will always be a part of me that feels betrayed by Blizzard’s decision to turn one of the most iconic RTS franchises into an MMO.

But I don’t like to dwell on the negative. There was a time when I wished the Warcraft franchise had ended with with Warcraft III, but that’s no longer the case. WoW has done some great things, despite its stumbles, and I’m grateful the universe has continued in this manner.

Most of these things are going to be lore-related, I’m afraid. That’s just how I am.

Fall of the Lich King:

If you didn’t play the strategy games before WoW, it’s difficult to communicate just what a big deal the Lich King is. The Lich King is not the most powerful villain in WoW lore, nor the most important, nor even necessarily the most interesting, but he is the most storied from a real world perspective.

The Lich King’s story began in the 90s, during Warcraft II’s Beyond the Dark Portal expansion. This introduced us to the Orc elder shaman Ner’zhul, who conducted a blitz campaign against the Alliance and then destroyed Draenor, creating Outland, in pursuit of new worlds to conquer.

Along came Warcraft III years later, and we learned that Ner’zhul had been captured by Kil’jaeden and turned into a necromantic spirit known as the Lich King. But the Lich King was a prisoner of the Legion’s will, so he sought a champion…

Enter Arthas Menethil. I think Arthas is a bit overrated as a character, but I do think that the way his story played out was masterful. Arthas was introduced as the stereotypical, clean-cut Alliance hero. There was an early quest that even had him saving Little Timmy from gnolls.

As the missions progressed, we watched as Arthas broke under the pressure of expectation. It crept up on the player so unexpectedly that you were left reeling by each twist.

And then, of course, this happened:

I really can’t overstate what a shock this was at the time. Nothing like this had happened in Warcraft before then.

Over the course of Warcraft III and its expansion, we watched Arthas fall deeper into corruption, until he merged himself with Ner’zhul to form the modern Lich King.

Wrath of the Lich King was the culmination of a decade of story-telling, including numerous arcs across multiple games and novels. The anticipation was vast. It had no right to meet my expectations.

But somehow, it did. I won’t claim Fall of the Lich King was perfect, but it satisfied me. And considering the height of my expectations, that’s amazing.

The conclusion of the Blood Elf arc:

Burning Crusade was pretty much entirely the Blood Elves’ story. Considering that, it says something to how bad the plot in that expansion was that I still hated it.

But it wasn’t all bad. The very ending events surrounding the Sunwell were a fairly satisfying end to the arc of the Blood Elves. They weren’t perfect, but all things considered, it worked out well. The prophecy of Velen and the whole M’uru thing were quite brilliant.

They may have limped across the finish with this story, but they made it. Beats being left hanging like I was at the end of WC3.

Varian Wrynn is actually one of the oldest Warcraft characters in real world time, introduced as a child king in Warcraft II. However, he was little more than a historical footnote prior to WoW. 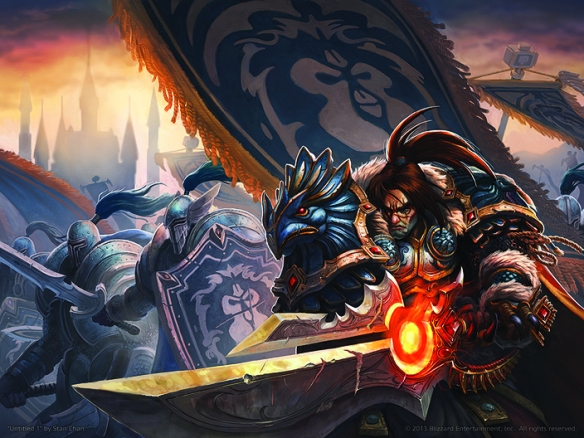 But he burst onto the scene in a big way with Wrath of the Lich King and its associated literature, and after the bitter disappointment of BC, he went a long to restoring my faith in Blizzard’s abilities as story-tellers.

Varian is like every defining aspect of the Alliance condensed into one man. He’s a self-righteous bigot, but he’s also fearless and noble, and he would give his life for his people without hesitation.

And let’s be honest: Varian has good cause to be a jerk. Virtually every person he’s ever cared about has died violently, and all of those deaths are connected to the Horde in some way. I don’t condone his racism, but I understand it.

Anduin is also an incredibly cool character. In stark contrast to his brash father, he’s a man of peace and faith.

These two are a fascinating yin-yang pair. Each tempers the other, and while they clash often, their love for each other allows them to endure things that would have broken lesser men.

The Old Gods were introduced in Warcraft III and its accompanying novels, but we knew little about them. WoW expanded them in a big way, creating a vast and terrifying mythology.

I’d go so far as to say the Old Gods have supplanted the Legion as Warcraft’s greatest villains. If only because the Legion’s been sort of neutered over time.

More than a silly meme,* Saurfang is also a fantastic character.

*(Saurfang can do that while stunned.)

Saurfang is a bit like Varian in that he embodies both the good and the bad of Orcs. He has a dark past — he’s overseen massacres, genocides, and hideous atrocities — but he has freed himself from that madness.

He is forever haunted by the crimes he committed, but he doesn’t let his guilt break him. He is determined to atone, to bring himself and the Orcish people back to their past honour.

Saurfang’s spirit is indomitable. This is best displayed in the utterly heart-wrenching scene in Icecrown where he confronts what was once his son. You’ll note that he talks about Dranosh in the third person, because he refuses to acknowledge this Scourge monster is his son. He won’t allow the Lich King even that small psychological victory.

Because he’s Saurfang, and he dual wields Chuck Norris.

There’s already been so much written about the Battle of Angrathar that there’s no need to repeat it. Suffice it to say, it’s probably the greatest moment in the Warcraft franchise — even greater than the highlights of Warcraft III.

Recently, Blizzard’s been acquiring ownership of several domain names, and this has, of course, triggered rampant speculation.

Some are Warcraft-related — warcraftbattles.com and heroesofwarcraft.com — and probably just examples of Blizzard protecting their IP, though they could be signs of a new game. They sound a bit like names for a DOTA or MOBA game, but we already have Blizzard All-Stars, so that’s unlikely.

I hope for Warcraft IV, but…

The more interesting one is projectblackstone.com. This is not obviously related to any known Blizzard project. Could this be the true name of the MMO code-named Titan? Could its official announcement finally be imminent?

Some speculation has Project Blackstone — whatever it is — as a continuation of Blackthorne, a game so far back in Blizzard’s library that even I am unfamiliar with it.

What do you think it could be? Give in to your desire for baseless speculation!