Once again demonstrating my total lack of impulse control, I picked up The Secret World during Steam’s latest sale. This game has stuck with me since my trial ended, and despite misgivings, I decided I wanted to continue with it.

I did this despite the fact my computer can barely run it (as you can probably tell from my screenshots), despite its subscription fee (which is a business model I grow more disdainful of with each passing day), and despite an endgame that holds very little appeal to me. That I even considered buying this game despite those issues shows there’s something special about it.

I’ll still play Guild Wars 2 on the side. It’s fun a game, but after a while, it gets a little… thin. It’s not a meal, so to speak. I’ll elaborate on this in a future post.

So I uploaded my game key, and after many wipes on the account reactivation boss (Seriously, Funcom, did you get your puzzle team to design the account management?), I hurled myself back into the dark mysteries of The Secret World.

…BUT THE WILL OF THE TEMPLAR IS STRONGER!

I don’t see a lot of point to alts in The Secret World. There are no extra races or classes to try, and there’s very little faction-specific content, but TSW is a bit more challenging than your average MMO, and I’m out of practice, so I rolled myself a Templar alt to get back into the swing of things.

The Templars aren’t quite as colourful as the Dragon, but they do have some swanky outfits, and I appreciate their old world style.

This is also a good opportunity to experiment with new weapons and builds without wasting AP on my main. I’m trying swords and chaos magic right now. Turns out that chaos is melee magic, which is an archetype I’ve always enjoyed. Now I’m tying my brain in knots to figure out how to add chaos to my main’s build…

I haven’t had much time to play so far, but these are my early impressions on returning to the game:

I forgot how awesome the audio in TSW is. The music is deliciously creepy, and the sound effects are absolutely stellar. All the little sounds in the background make it very immersive.

I also forgot how much my computer struggles with this game. I can practically hear my CPU grunting and panting through every lengthy load screen.

Either they’ve expanded the options for starting clothes, or females get a much better choice than male characters. My Templar looks snazzy right out of the gate, even if she doesn’t have one of those sweet Templar uniforms yet.

Why on Earth do people say that combat is TSW’s weak point? I’ve never played an MMO with combat so thoroughly and immediately satisfying. People say the combat is clunky, but what’s clunky about it? The speed at which you can churn out your finishing moves? The fact you can almost always move while casting? The diversity of enemies that keeps you on your toes and using your whole toolkit?

I don’t get it. My Templar lady has completed a grand total of two missions (not counting the intro in London), and already, I find fighting on her at least as satisfying as on my thief in GW2 or most of my WoW characters. 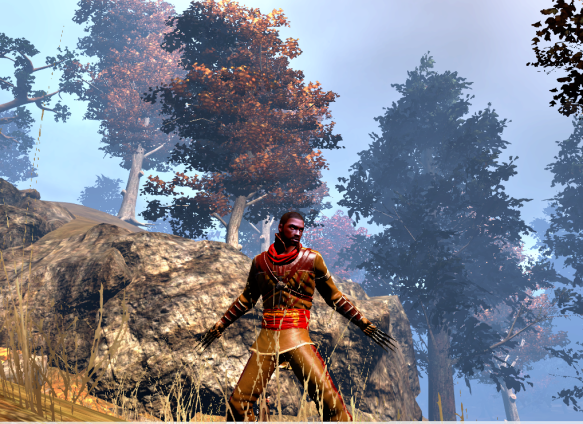 Once I’ve gotten reacquainted with the game a bit, I suspect I’ll go back to my main, finish off the Savage Coast missions, and move on to Blue Mountain and eventually the rest of the game.

I doubt I’ll bother with dungeons or the new Manhattan raid — with my computer in the state it’s in, I’d probably just be a liability to groups anyway.

The general consensus is that The Secret World’s quest design and writing is of such high quality that it’s worth the price of admission even if you just treat it like a single-player RPG and never bother with the MMO aspects, so that’s pretty much what I intend to do.

And now, I must return to chopping up zombies in New England.

My latest WhatMMO article is 5 In-Game Memorials. I must admit, even the cold depths of my black heart warmed a bit upon researching some of these stories.

5 thoughts on “Dark Days Are Here…”