One of the reasons I try to take a break from World of Warcraft now and then is that it grants me some perspective on the game. My disaffection with the current state of the endgame has caused me to look back at my entire love/hate relationship with WoW.

While there have been many good times, there have been design decisions I’ve strongly disagreed with from day one — not the least of which being its existence as an MMO.

So that got me to thinking about how I would have preferred things to turn out, what WoW would have looked like if I had taken the reigns. Perhaps it’s a bit narcissistic, but what’s a blog for?

The setting and world:

When Cataclysm was announced, I found myself thinking, “This is how WoW should have started.” Now, I don’t mean that classic should have been about Deathwing or the elementals. But the idea of Azeroth recovering from the apocalypse would have made a great basis for WoW to start with.

Azeroth already had a pretty good apocalypse in the form of the second invasion by the Burning Legion in Warcraft III. I was always disappointed by the lack of acknowledgement of this in WoW.

Admittedly, WC3 wasn’t terribly exact about the extent of the damage, so I can’t quite call it a retcon, but the overall impression was one of utter devastation. The Alliance was portrayed as a ragtag gang of survivors squatting in ruins and being led by the greatest jackass in the universe pre-Garrosh simply because they didn’t have anyone better.

So I would have depicted the world as being completely ravaged by the Legion and the Scourge. Rather than lacking a main plot as classic WoW did, the story would have focused on rebuilding civilization and defeating the last remnants of the Demons.

Instead of having the two continents as separate leveling paths, I would have designed Kalimdor for lower level characters and reserved the Eastern Kingdoms for those pressing on towards level cap. The idea being Kalimdor was where the Legion fell, whereas the Eastern Kingdoms was conquered outright.

The main hub cities would have been Orgrimmar and Theramore. Potential secondary hubs for the Eastern Kingdoms include Kul Tiras, Stromgarde, and Stormwind.

Speaking of which, I would have been more thorough about including the entire world of Warcraft. Gilneas would have been available from the start, as would Kul Tiras. (Seriously, Blizzard, how much longer do we need to wait for Kul Tiras?)

Stromgarde either would have been intact — because if anyone is badass enough to survive the Legion, it’s those folks — or at least given a proper send-off and a sufficiently epic end, as opposed to being randomly wiped out by ogres or something.

I also would have tried to make more of the dungeons based on previously established locations. Grim Batol, the Oracle Caverns, the Ruins of Lordaeron, and the Barrow Deeps are all dungeons I would have included with launch.

I would not have included separate playable factions in World of Warcraft. The races would instead have been in a state of relative peace, though they wouldn’t necessarily have been best friends. I’d have probably devoted a good chunk of the story towards the races learning to work together despite old grudges.

I know many will disagree with my view —  most notably Metzen himself — but I think the Horde and the Alliance have long since outstayed their welcome.

From a lore perspective, it just feels sloppy and cheap to still have them fighting. Blizzard devoted an entire blockbuster game to putting to rest the wars between the factions, and then they just outright ignored all that well-crafted story when they made WoW.

Making the races at peace but not necessarily close allies also strains credibility less than cramming every race into one of two factions whether it makes sense or not. To this day, I have absolutely no idea how, why, or when the Night Elves joined the Alliance. The only justification I see for it is that it’s slightly less crazy than them joining the Horde.

Finally, segregating players just isn’t a good idea for an MMO. My aesthetic choice of race should not determine who I can play with.

As for players themselves…

Gnomes would not have been a playable race. Sorry, little guys.

I’m tempted to say Forsaken wouldn’t have playable, either. This pains me, because I really like the Forsaken, and I think the Undead are one of the cooler races, but it really strains credibility to have them working with the other races. They probably would have been more interesting as a neutral villain/anti-hero faction.

Rather than having separate starting zones, I would have made everyone start at Mount Hyjal. Instead of being random shmucks, players would take on the role of veterans of the fall of the Legion, and the game would immediately have sent you to clean up the remnants of the Demons and the Scourge, establishing them as the main threats early on.

Though separate starting zones was a really good decision from the perspective of alts, so maybe Blizzard had the better idea. 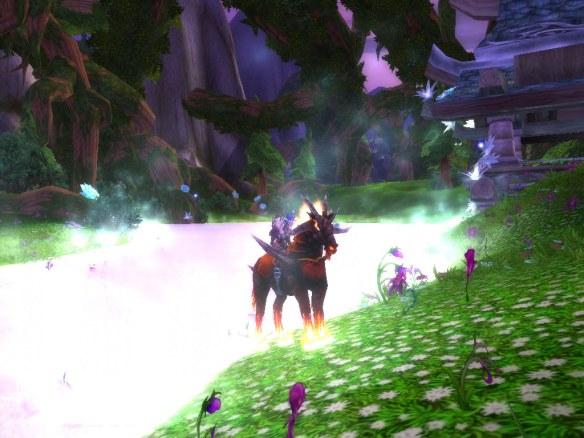 Classes would have been largely the same. I’d have included an option to use ranged weapons without a pet, either as a hunter spec or another class. Dark ranger? Shadow hunter? A ranged rogue spec?

I would have made Wrath of the Lich King the first expansion rather than the second. I wouldn’t change much about it, honestly. Maybe wouldn’t have included the plot with Malygos going mad with sanity. Seriously, how does that work?

I would have added Blood Elves as a playable race here, in addition to death knights as the new class. Next to the Forsaken, Blood Elves have the most reason to hate Arthas.

Burning Crusade would have come next. With the Legion and the Scourge dealt with in Azeroth, it makes sense to expand into Outland. I would have presented Outland as a more obvious threat, and given players’ expedition there a clearer purpose.

Illidan would have featured prominently, but not as the cliche stock villain they turned him into. He would have kept his traditional role as the anti-hero who believes the ends justify the means.

Kael might still have gone mad, but he would have done so in a way that makes sense. He wouldn’t have randomly decided to start working for the guy who destroyed his homeland and murdered everyone he ever cared about.

Draenei would have been added as a playable race, but I would not have carried out the infamous Draenei retcon. Not so much because it blew up Warcraft’s backstory (although it did), but simply because I found the old Draenei infinitely more interesting.

Cataclysm and Mists of Pandaria probably never would have existed on my watch, as my other decisions render their plots somewhat redundant. Which would have been a shame, as a lot good did come out of these expansions. Goes to show you Blizzard’s direction isn’t without merit.

My other expansions probably would have been a sea-themed expansion featuring the Naga and other horrors of the deep followed by an Old God expansion focused on the underground regions of Azeroth, such as Azjol-Nerub.

I hope this didn’t come off too rant-y. While these ideas are very much couched in my long-held complaints about WoW, I mostly intended to this be a fun way to imagine what could have been.

What about you? What would World of Warcraft look like if you had been at its helm?

3 thoughts on “If I Had Designed World of Warcraft”