Just after posting this, I learned that Sanctuary, which I had been covering on this blog for some time and was the only speculative fiction show on TV I still watched, has been cancelled.

I may have more thoughts on this at a later date, but for now, on with our regularly scheduled blog.

I’m a regular reader of fantasy author David Farland’s “Daily Kick in the Pants” writing newsletter. In a recent installment, he suggested that all writers likely suffer from some form of schizophrenia. Thinking about it, he may have a point.

Take my life, for example. One of my closest friends is a woman named Leha.

Leha is a small woman with brown hair and eyes. She’s friendly and charming, which serves her well in her job as an antique-dealer. She’s commitment-phobic and only interested in what’s new and exciting, so she has bad luck with relationships, but she doesn’t let that bother her. She has great common sense, which she ignores with a religious devotion. She was born in Three Gates, Eastenhold, and she does not exist. 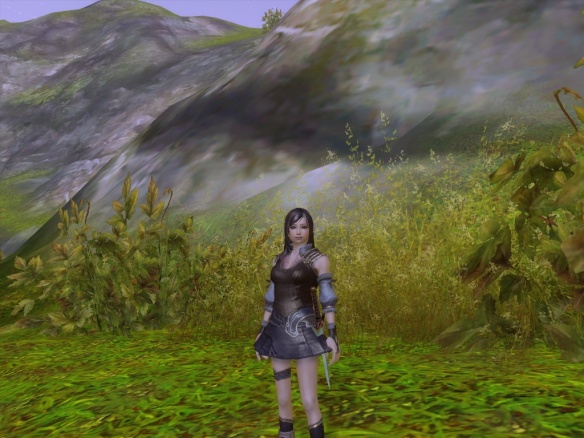 Leha is entirely a figment of my imagination. I created her and her world about four years ago now — I forget exactly.

And yet despite the fact that she does not exist, Leha is easily one of the most influential people in my life. I’ve written two novels and several pieces of short fiction about her — I’m just finishing her latest tale now. Even when I’m not writing about her, she often invades my thoughts.

My obsession with her has at times grown so intense that I thought of her whenever I saw a short woman with brown hair, and among my close friends and family, “Leha short” is now an accepted and understood measurement of height.

When I discovered how powerful the character customization in Aion was, one of the first things I did was replicate Leha exactly as I imagined her.

Writing about Leha has helped me work out many of my own issues. Because I’m a sick bastard, I respond by putting her through every kind of hell I can come up with. But that makes for a better story. She’s an avid reader, so I think she’d appreciate that.

The point is that Leha really does feel like an old friend, despite the fact that she’s nothing but words on a page.

So if you’ve ever wondered what it’s like to be an author, it’s weird. Really, disturbingly, frighteningly weird.

Another of my articles has gone up at WhatMMO: Best MMO Settings. I’ve always felt a good setting is crucial to any RPG, and to MMOs in particular. If you’re going to spend a lot of time in a virtual world, it had better be interesting.