I have often said I have far too much franchise loyalty for my own good. 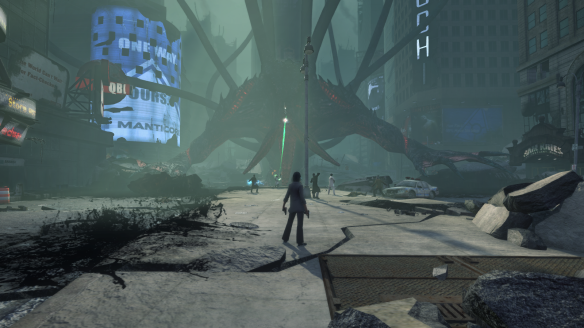 I think my feelings on The Secret World’s reboot as Legends are known by now. Nonetheless, I can’t say with absolute certainty that I’m never going to play it. I have eight characters in SW:TOR now, after all. No one could have predicted that.

And if I ever play it, I’ll want my loot from TSW. And if I do, I’ll need to link my account now, because there’s a time limit on that.

In theory, all you have to do is click a button on the account page, but I’m paranoid, so I wanted to actually log into the game and make sure it all transferred. Which meant actually playing the game, as you don’t get delivered items until you finish the tutorial and make it to Agartha.

I bring you now the tale of that ill-fated excursion.

I agonized greatly over which character to attempt to recreate. This is one of the biggest things turning me off Legends to begin with. I don’t have enough character slots to bring them all over (which is ridiculous; I paid for the damn things), and I hate the idea of having to choose between them.

In the end, for reasons I have trouble articulating even to myself, I picked Dorothy the Templar as my ambassador to this new/old world. Things didn’t get off to a great start. The new character creation is just awful. TSW already had fairly limited options for a modern MMO, and Legends has greatly reduced your choices. You can no longer customize facial features individually. You can only pick a face and then choose from a variety of randomized variations of it. I can’t imagine how anyone thought this was a good idea.

Also, why is everything blinking all the time?!?! Aaaaaghhh.

To be fair, I like the new hair. It’s mostly the same styles, but they’re now higher rez, and there are more and better colour choices. There’s actually a nice green now. I almost made Kamala instead for that reason, but I couldn’t come up with a face that looked at all like her.

Not that I got Dorothy entirely right, either. She wound up in this weird uncanny valley scenario where she almost looked like the character I know… but not quite.

The new tutorial has gotten some criticism, but I actually kind of like it. It’s atmospheric, and it has some interesting hints about the greater lore. It also feels pretty remedial at times, but a lengthy, hand-holding tutorial is exactly what the old game needed. Really that’s the only big change it needed. I think this will be good for new players.

This is then followed by the original tutorials in Tokyo and the faction HQ (each slightly redone), and I did start to get impatient after a while, but I think that’s mainly because I’m a veteran who knew what to expect. Again, I think a new player would probably find it a lot more palatable. 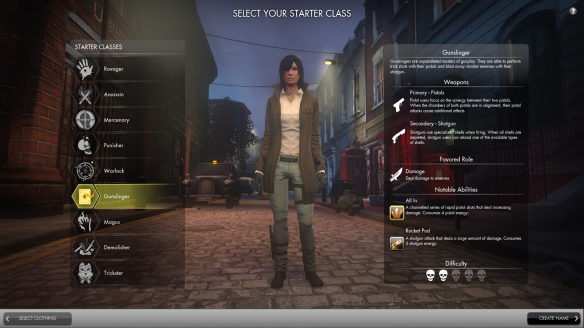 I didn’t experience enough of the new gameplay to form any clear conclusions. It all seemed as insultingly easy as I’d feared (most enemies died in literally one shot), but that is the tutorial. Maybe things are different once you get out into the world.

A part of me died when I saw the “class selection” section in character creation, and the new skill trees are definitely simplified, but after studying them a bit, they didn’t seem quite as brainless as I’d expected. There are still far more abilities than you can equip at a time, so it seems deck-building is not entirely dead.

I still hate the idea of having to unlock additional weapons beyond your base class, though.

From the looks of it, shotguns are now a true tanking weapon. I really like that. I always wanted to tank with a shotgun as my main weapon.

I’m curious if any other weapons have changed roles, but I didn’t notice any at a glance way to see the roles of various weapons.

The new combat animations don’t seem to have quite as much energy or flair as they used to, at least where firearms are concerned, and there’s now this awkward animation whenever your character stops running. It looks absolutely terrible. I don’t know what they were thinking.

The game world itself doesn’t seem much changed. Temple Hall is still full of cats — I wasn’t sure if that would carry over. I thought maybe they’d run the competition again or just ignore it all. 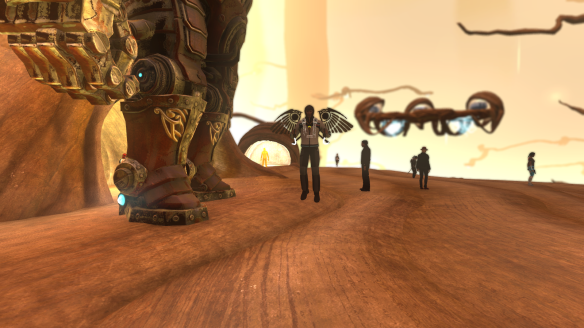 One thing hasn’t changed: Agartha is still weird as hell.

Eventually, I finished the tutorials and made it to Agartha, at which point my cosmetics unlocked. I didn’t go through it all with a fine-toothed comb, but it does seem the large majority of stuff did carry over, including my Panoptic Core.

Deck uniforms are one thing that didn’t carry over, though, so I was not able to put Dorothy in her traditional Puritan outfit. But I did see some people in Agartha with deck outfits, so they must still be in the game somehow. Bizarrely, they no longer seem to be tied to faction. I saw someone in a Templar uniform that had Illuminati colours. It was very jarring.

Unfortunately, upon entering Agartha I also began to suffer from nearly constant disconnects and crashes that made it unplayable. After nearly an hour of relogging, rebooting, and tinkering with game settings, I was unable to solve the problem. I thought maybe if I could make it out of Agartha things might improve, but I was crashing so much even that proved a bridge too far.

At this point, my already thin patience with the reboot reached its end. I ragequit and uninstalled.

I’m still not going to say I’ll never play Legends, but it’s certainly not something that greatly interests me right now. I still see no good reason why we needed to lose our characters and all our progression, and the fact the game is literally unplayable for me right now isn’t improving matters.