I may not be thrilled with Funcom’s handling of The Secret World and its less than stellar reboot, but I love this setting, and I want to keep it alive, so I’m more than happy to support any games using its IP. Let’s be real anyway: A franchise of single-player games is probably what TSW should have been all along. 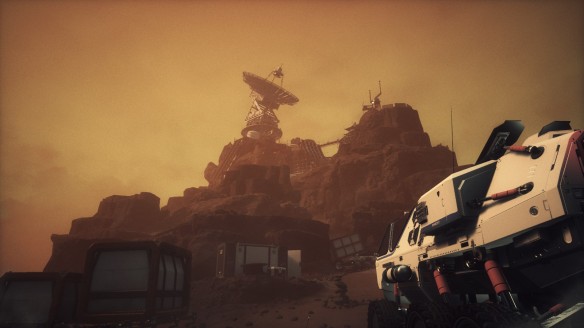 Enter Moons of Madness, the second single-player spin-off of The Secret World. It is significantly bigger and more ambitious than its predecessor, The Park, but not quite as brilliantly executed.

Taking place in the not too distant future, Moons of Madness places you in the shoes of a mid-level Orochi employee on a research base on Mars. Just by saying “Orochi,” I’ve probably given you a pretty good idea of what ends up happening. Suffice it to say things don’t go well.

The strange thing is that Moons of Madness is much more overt in connecting to the story of TSW than The Park was — familiar concepts like the Filth and anima are front and centre — but it still feels less like a TSW game.

What I like about the TSW setting is that it’s not what I would consider to be “traditional” horror. It’s not a barrage of jump scares and gross-outs; it has those things, but it doesn’t use them as a crutch. It’s more subtle.

Moons of Madness is not subtle. There are jump scares waiting around every corner. If you’re a hardcore horror fan, you might enjoy it, but I found it exhausting, and it feels crude compared to what has come before in the TSW setting.

It does get better near the end. The final couple hours become more surreal and narrative-focused, as you would expect from a good Secret World story. I enjoyed the game a lot more by then.

I didn’t love the very ending, though. It feels like it trivializes the threat of the Dreamers a bit.

When it comes to gameplay, Moons of Madness is competent, if not groundbreaking. When you take away the trappings of horror, this is essentially a puzzle game. A bit like an extended investigation mission from TSW, though not quite so devilishly arcane and difficult. Some puzzles are obvious, like brewing a specific chemical concoction, while others are more environmental puzzles around evading various threats.

I’m not a huge puzzle guy, but I think they mostly did a good job on these. A few are a bit frustrating (usually due to unclear instructions or other quality of life hiccups), but mostly they manage to hit the sweet spot of being just challenging enough to be interesting, at least for me.

They do a good job of keeping it fresh, too. New mechanics are continually introduced throughout the game, so it never starts to feel stale.

On the whole, it’s a solid game, but it doesn’t feel quite as special as previous Secret World games.