I’ve found myself in another period of jumping between a bunch of games in rapid succession lately. Without intending it, I’ve ended up on a bit of a Bioware kick, though Blizzard has also put in an appearance.

I’ve chosen to participate in IntPiPoMo again this year, so I’ll be including extra screenshots of every game. Click to enlarge!

I’ve been meaning to do it forever, but I finally did a third playthrough of Mass Effect: Andromeda. As I’ve said before, the new game plus in this game is truly second to none. After two playthroughs, I had all the skill points and gear I could possibly need. I didn’t need to waste any time mining, gathering, or even looting bodies. It makes for a much tighter, more story-driven experience.

I skipped even more side content this time — especially on Kadara — making for a nice breezy playthrough.

This time I did something I haven’t done in Mass Effect before: I played as a soldier, using mainly combat abilities. It’s definitely not as fun as biotics, but it’s not without its charm. Overdrive plus a rapid-firing assault rifle gets pretty hilarious.

I also romanced Jaal this time. It took a while to get to the good stuff, but I can see why his romance is so well-regarded. Dude’s so passionate he makes even me feel a bit weak in the knees.

I had pretty low expectations for this expansion, but even so it’s a disappointment.

First of all, calling it an “expansion” is pushing credibility to a breaking point. It has barely any more content than their recent content patches. I think the whole thing took me maybe five hours.

That might be forgivable if they hit the ball out of the park on the quality of the content, but they didn’t, at all. The entire story is crushingly dull. It feels like they rehashed some rejected side quests from the base game. It’s a very small, ultimately irrelevant story. It’s downright insulting to go from being a galactic super power to doing fetch quests for some nameless back alley gangster.

The faction conflict worked in the original class stories because it was just a backdrop for more personal stories. My agent had personal reasons for fighting back against Hunter and his ilk. There’s none of that in Onslaught; you have no reason to care about anyone or anything in this story. It’s just shooting faceless NPCs of the enemy faction.

At the very end, there are some teases of a new direction for the story, and it sounds very interesting, but it begs the question of why we didn’t just skip to the good stuff. Why waste time with the tedious chores that make up Onslaught?

The one thing I can praise about Onslaught is that it doesn’t feel like a total reboot of the story after the Fallen Empire/Eternal Throne arc. I was worried it would be. But the Odessen Alliance is still a player in the story, and there’s lots of cameos by familiar cast members. Even Koth put in an appearance.

I would have liked more content with Lana — weren’t we supposed to be getting married? — but at least she’s not gone entirely. That gives me some hope for the future.

But man, even for the low price of a month of subscription, I feel ripped off by Onslaught. What a waste of time.

I’ve also ducked back into Anthem for a brief visit. I was drawn by the new Mass Effect-themed Javelin skins. I’d yet to find a look for my interceptor that I really liked, and Quarians are my favourite ME aliens, so buying the Quarian skin was a bit of a no-brainer.

I love it. Even if I hadn’t been a Mass Effect fan, I might still have gotten the skin because it just looks so damn good and is so different from anything we have in the game right now.

Anthem has done a really good job at adding interesting cosmetics, and the fashion endgame is getting pretty serious. And I, for one, welcome our new fashionista overlords. 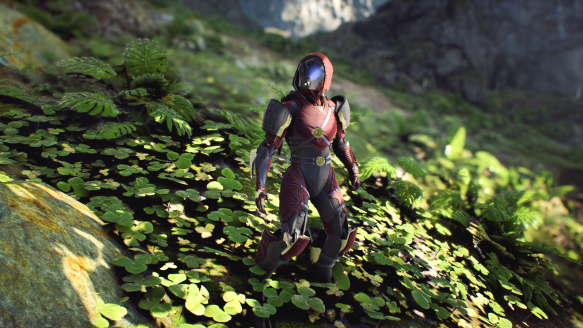 I also checked out the new freeplay events added for the “Season of Skulls.” They’re pretty fun. The one with the torches in the darkness especially stands out as being very atmospheric and rather different from any of Anthem’s previous content.

Anthem unquestionably has a problem with anemic content right now, but I must say the quality of what content does get added never disappoints.

I’m at the point now where I think I’m willing to drop my boycott against Blizzard, though I definitely plan to be more skeptical of what they do in future. Brack’s apology at BlizzCon doesn’t count for much, but the tolerance they showed to protesters at the convention does speak to a willingness to walk the walk on free speech. It’s the bare minimum necessary to maintain the illusion of decency, but the bare minimum is by definition good enough.

I still the company’s changed, and I’m trying to lose my blind fanboyism for them, but I’m willing to give them another chance at this point.

For now all that’s manifested as is finally buying Stetmann in SC2’s co-op, though even then I paid using some of my remaining WoW Token balance.

He’s an interesting commander, but I don’t think he’ll ever be my favourite. I like the concept of the Stetallite mechanic, wherein he blankets the map with satellites that project various buff fields, but the way it’s implemented feels like a bit of a chore. You spend every free moment dropping more Stetallites, and it gets exhausting after a while.

Zerglings with Immortal shields get pretty hilarious, though. I’ve had surprising success just massing swarms of Lings and swamping the map with them. Back them up with Hydralisks for anti-air; their missile attack is godly.