Astellia isn’t a game that’s really been on my radar, but the Massively OP staff were given a number of keys to the beta, and I’m always up try a new MMO, so I decided to check it out.

I won’t say it’s as bad, but Astellia reminds me of Trinium Wars in that it feels less like a real game and more like a parody of bad MMO tropes.

To start with, the tutorial is about 90% cutscenes and 10% gameplay, or at least it feels that way. I admire that the developers actually wanted to make story a priority, but they’ve mistaken more story for better story.

There’s not really an effort to explain the setting to you, to develop any characters, or to give you any reason to become invested. There’s very little context for anything. Instead you’re just bombarded by an onslaught of corny dialogue and ridiculous fantasy names — and this is coming from a guy who willingly and happily reads a series where the name “Celephriandullias-Tildorangelor” is a central part of the story.

As far as gameplay goes, the main selling feature of Astellia — and the source of its name — are the Astels, fey spirits you can collect and then summon to aid you in combat. Very much shades of Pokemon here.

Looking over the journal of potential Astels you can get, it seems there are more options later on, but the Astels available to me at the start were all in the form of seven year old girls. It’s exactly as creepy as it sounds.

Also, one of them has a giant cup of tea on her head, and her abilities centered around buffing allies with “soothing tea” mid-combat. I acquired her whilst an army of demons burned my character’s home village, presumably murdering everyone she ever cared about, and the tonal dissonance was so whiplash-inducing my immersion never really recovered.

It’s also probably worth noting that the Astels didn’t really seem to do much. Maybe they feel more impactful when you’re in more challenging content and/or have leveled them up more, but in the time I played it felt like I could have ignored them entirely and nothing really would have changed. Not a good sign considering this feature is the Astellia’s chief claim to fame.

The graphics are pretty, but not so pretty as to make the game really stand out. The bar is pretty high these days, and Astellia isn’t going to compete with the likes of Black Desert, especially since there isn’t a lot of personality to its art style. I will say some of the character and mob design is pretty cool, at least.

Combat in Astellia is your standard tab target affair, complete with mobs that drop dead after a few hits and don’t seem to require any tactics to defeat. There’s an active dodge mechanic, but I didn’t encounter anything that actually needed to be dodged while I was playing.

This is reasonable attire for an adventurer to wear into battle.

What surprises me more than anything, though, is how bad the animations are. None of my abilities had any kind of flair to their visual or audio effects, and it felt like they had no impact at all.

If there’s one thing you can usually count on Eastern games to deliver, it’s great combat animations, but in Astellia — at least as an archer — they were at best on par with those you’d see in a ten year old Western WoW clone.

This, at least, could be attributed to beta jankiness. This was a true beta test, not a soft launch, so there’s still time for combat to improved. A lot of the game’s other problems feel pretty deeply ingrained, though.

The worst thing is that without Astellia’s glaring flaws — its overbearing attempts at story-telling, the vague whiffs of child exploitation, and the like — it wouldn’t be memorable for anything at all. There’s really nothing about it that’s unique or interesting — it plays like it was built using a checklist of generic fantasy MMO tropes.

The classes, for instance, are as generic as they come. Warrior, assassin, archer… There’s not even an attempt at originality.

While it seems a bit arbitrary to me, the trend seems to be to compare Astellia to Bless Online, and for my money, Bless is a much better game. Bless had better graphics, a better story, better classes, and better combat. 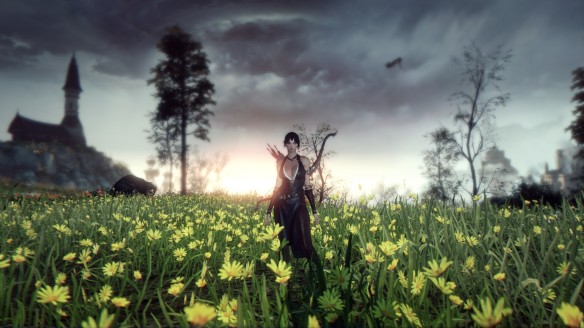 I’d still tentatively recommend checking out Astellia if/when it becomes free to play, but only as an exercise in kitschy silliness. This is definitely not a game I see as worth playing seriously. It’s all the ridiculousness and creep factor of TERA minus the good combat, which was about the only thing TERA did right.