Netflix’s adaptation of the sci-fi novel Altered Carbon was first put on my radar by Ashley of Robo♥beat, who is a fan of the book. Later, I listened to one of my friends here in the city raving about it while we were at dinner. With two people whose opinions I respect recommending it, I figured it was time to give it a try.

Altered Carbon is cyberpunk-ish series depicting a far future where consciousness has been digitized, allowing people to continually download into new bodies as a form of immortality (Battlestar Galactica fans will find much of this series feels familiar). The rich can afford an endless supply of clones of their original body, while the poor are crammed into whatever body — or “sleeve” in the show’s lingo — is available.

Into this world awakens Takeshi Kovacs, a veteran of a failed revolution who is hired by one of the ruling aristocracy to solve the murder of his last body. As he investigates the case, Kovacs comes face to face with a conspiracy spanning centuries, and the brutal realities of life in the future.

And let’s be clear: It is brutal. This is by far the most absurdly violent and gorey show I’ve ever seen, and I used to be a huge Dexter fan. There’s also more nudity than I’ve ever seen on TV.

Mind you, I’m quite unfazed by both blood and boobs, so I wouldn’t say this is a complaint.

It does sort of touch on my one big issue with Altered Carbon, though, and that’s that this is a show with absolutely no subtlety whatsoever.

The social commentary, for instance, could give Bioshock a run for its money in the realm of ham-fisted delivery. Just as in the case of Bioshock, I even agree with the show’s politics, but even so it’s just so over the top and shamelessly unsubtle I have to facepalm a bit.

Similarly, most of the characters are cliched to the point of being utterly cartoonish, as is a fair bit of the dialogue.

The one exception to this — and a major highlight of the show — is Poe, an artificial intelligence who runs the hotel where Kovacs stays and has chosen to construct his persona in imitation of Edgar Allen Poe. He’s the perfect gentlemen, and a delight in every scene he’s in.

I also found it very visually appealing show, albeit in a dirty and gritty sort of way. The production values and special effects are easily equal to any Hollywood blockbuster.

The action sequences are excellent, as well. The fight scenes are so intense and well-choreographed they could almost give Continuum a run for its money. 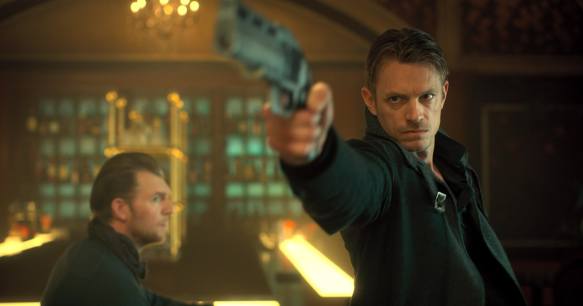 As for the main plot, it’s… decent. Altered Carbon sort of turns into a different show about halfway through, and I actually like what it evolves into, but it takes some adjustment.

It does do a very good job of exploring the personal and social ramifications of being able to download one’s mind into new bodies… but I didn’t find this quite so clever or thought-provoking as the writers probably hoped. Perhaps because I’ve already seen similar ideas elsewhere in sci-fi, or perhaps because I’ve never been all that attached to my own body.

If there’s a second season, I’ll watch it.