As you may recall, I initially had a hard time getting into the Netflix/BBC adaptation of Dirk Gently’s Holistic Detective Agency. It was a strange, seemingly obtuse show with little connection to its source material. But by the end of season one, I’d been converted.

A year later, season two has appeared on Netflix, and I’ve been more than converted. I’ve been absolutely floored.

Compared to season one, season two’s plot is a fair bit more straightforward, but I use the term loosely. It’s still so bizarre and complex that I’d have a hard time knowing where to begin summarizing.

I can say it involves magic, scissor-wielding knights, pocket dimensions, a holistic method actress, a boat that fell from the sky, a purple people-eater, an epic gay love story, and the best worst cops ever.

Oh, and you might just learn the how and why of Dirk Gently’s existence along the way. Before, I disliked the attempt to provide an explanation for Dirk’s abilities, but seeing how it now fits into a greater mythology, I’ve come to appreciate the idea.

Much of season two deals with events in an alternate reality, a fairytale kingdom called Wendimoor. A surreal place of rainbow colours and childish ideas, Wendimoor initially seems like a place of utter silliness and absurdity, but I guarantee you that by the end of the season, you’ll be taking events in Wendimoor very, very seriously.

That said, while the show can still go to some fairly dark places, season two does have a lot more levity than season one. There’s more jokes, more humour, and a more whimsical tone in general, as well as some genuinely heartwarming moments. 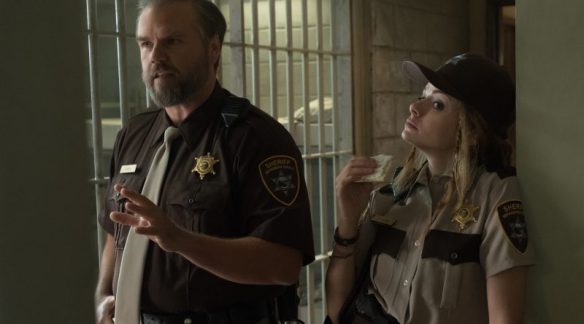 A real highlight of season two comes in the form of two new characters, Tina Tevetino and Sherlock Hobbes, the only two cops in a tiny Montana town that lies at the heart of Dirk’s latest “case.” Bored out of their minds from their life in a town where absolutely nothing ever happens, Tina and Hobbes become almost frighteningly eager to assist Dirk’s friends on their exciting adventure.

They’re the worst cops ever, breathtakingly undisciplined and unprofessional, and yet almost overwhelmingly lovable and entertaining. They’re the best part of season two, and that’s saying something in a season that’s virtually flawless from top to bottom.

And truly, this is a season of television that has it all. Humour, drama, action, mystery, suspense, shock, horror… Name an emotion, and season two of Dirk Gently will make you feel it.

As before, the season begins seeming like chaos, like nonsense. Weirdness will be thrown at you hard at fast, and none of it will make any sense. But with each passing episode, more pieces will fall together. Everything will come together, and (nearly) every question will be answered. Anarchy becomes a symphony.

These are the kind of stories that both inspire and depress me, because I want so badly to be able to write like this, but I know I’m just not that good. Maybe one day I’ll become a good story-teller, but I’ll never be this good.

If I have one small complaint, it’s that Dirk himself takes something of a dark turn this season. He spends much of it in a state of depression, his confidence shattered and his sense of wonder replaced by cynicism. Now, this makes perfect sense given all that’s happened in his life, but it just doesn’t feel the same without Dirk’s usual manic enthusiasm. 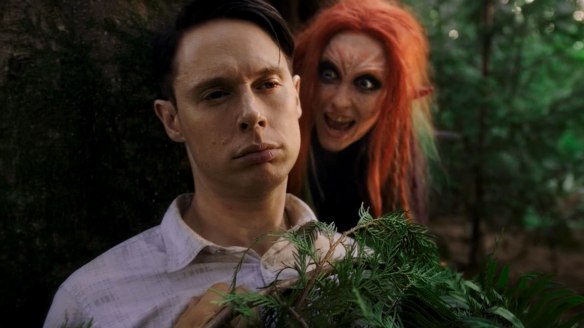 In every other way, this is about as good as TV gets.

In researching this post, I was very saddened to discover that the BBC has cancelled the show. My hope is that Netflix may pick it up for a third season themselves, because this is definitely a show that deserves to continue, but if not, the silver lining is that season two does have a mostly conclusive ending, so it’s not like we’ll be left with an unfinished cliffhanger at least.

Regardless of what the future holds, Dirk Gently’s Holistic Detective Agency is a show that has now earned my unequivocal recommendation. Season one took some getting used to but was worth it in the end.

Season two, on the other hand, is a masterpiece.

Overall rating: 9.6/10 Whether you know it or not, you need this show in your life.