Whatever the actual end date turns out to be, it is now clear that The Secret World’s days are numbered. I have decided to say goodbye to the game while I still can, conducting a final tour of some of my favourite parts of the game and finding thematically appropriate ways to retire my many characters. 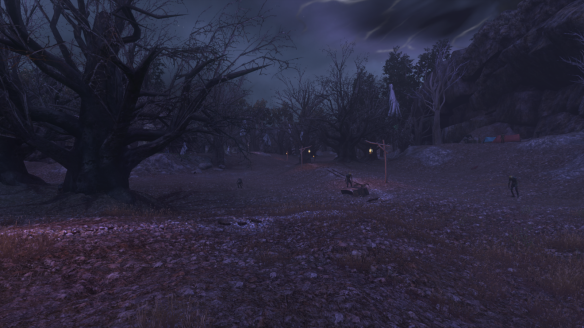 And taking an unhealthy number of screenshots.

This may seem a little premature, given that the servers are still intended to stay up for the immediate future at least, but there’s no point in continuing to invest in a dead game, and frankly at this point I don’t entirely trust Funcom not to just shut the servers off without warning.

The order in which I retired characters was dictated more by whim than any particular logic. For whatever reason, I began with my “main alt,” Dorothy the Templar.

I started by repeating issue seven, A Dream to Kill, which I think remains the best thing TSW ever did. In fact, I’d even go so far as to say it may well be the high water mark for video games as an art form.

And the passage of time has done nothing to dull its brilliance. It remains an absolutely masterful experience — surreal, haunting, chilling, and awe-inspiring.

Of course, I’ve had Sleepless Lullaby stuck in my head ever since.

It was also a good reminder of just how badass Carmen Preda is. I realize there’s no end of competition, but she really doesn’t get enough mentions on people’s lists of best TSW characters.

Before the end of the game was announced, I had been pushing Dorothy towards completing her ability wheel and earning her Panoptic Core, my second on the account. With the aid of an AP booster, issue seven was enough to earn the last few abilities and unlock the Core. Totally pointless to do now, of course, but for some reason to gives me comfort to have finished the project.

As my darkest and most twisted character, it seemed only right her fate be the most bleak. In the end, she shared the fate of Tyler Freeborn, wandering out into the ocean around Solomon Island, to be swallowed by the fog and the waves. To join the Red Sargassum Dream.

On my Illuminati, I began by repeating one of the missions at Innsmouth Academy. No tour of The Secret World’s best moments would be complete without Innsmouth, and it’s an Illuminati stronghold, so it seemed an appropriate fit.

I also paid a brief visit to New York and talked to Geary briefly, if only to hear her admit defeat to the Dragon one last time.

After that, it was time to retire the character. His end proved far more raucous than Dorothy’s. He went to the Horned God in London, drank the entire menu, and ultimately passed out shirtless on the dance floor.

The flame burns out:

Saying goodbye to Kamala was one of the more difficult parts of all this. By the time I created her, I’d already played the game so much it was hard to get the motivation to actually level her, so she wound up eternally neglected. But her backstory and personality had always been very vivid in my mind, and I loved her look and her outfits. For a character I spent hardly any time playing, she managed to be quite dear to me.

I wanted to introduce her to Ricky Pagan before the end, as I’d always thought they’d be a good pair, but you can’t get to Tokyo without completing the whole story, and she’s nowhere near that. It didn’t seem worth the effort.

In the end, she simply returned home to Seoul, to the hotel where it all started.

It’s funny how even after so long you can still notice new details. I never realized you can see the Kumiho girl in one of the windows. You can even click on her. Turns out her name is Hana.

I brought Kamala to the room — you know the one — and sent her to sleep for the last time.

Like Kamala, my “Elf” character, Freydis, is a sad case of wasted potential. I created her just a few months before news of TSW’s end was announced. She’d barely even made it to Kingsmouth.

I wanted her to end her days among the snow, and thankfully, that was more doable than a meeting with Ricky Pagan.

It was of course a bit of a challenging journey to reach the Carpathian Fangs as a character who isn’t even ready for the Savage Coast, but it wasn’t as difficult as I feared. There were a few hairy moments involving fleeing from vampires whilst spamming Blood Shield for all I was worth, but she managed to avoid any deaths over the journey.

Actually, she may have gone her entire short life without dying, come to think of it. Feels almost like an oversight in a game like this.

I did make a few stops along the way, mostly involving more screenshot opportunities. I did pause at the Owl and the Eagle to talk to Cern a bit. He’s one of the few true peers Freydis could find.

Her journey ended among the snows of the Carpathians, but before it did, I picked up one of Traian’s missions. She’s too low level to complete it, of course, but I wanted to see the cutscene.

Like Carmen, Traian is a character who doesn’t get enough praise. Who wouldn’t love a sage elder werewolf who sounds like Sean Connery?

I saved my main for last and used him to tour a few more of TSW’s best moments. I did the Tyler Freeborn arc again, and despite the game’s flagging population, I managed to get a group for The Facility, which remains my favourite of the game’s dungeons.

Also, having been denied the opportunity on Kamala, I headed to Tokyo to do Ricky Pagan’s first mission one more time.

In a game drowning in fantastic characters, I think Ricky might just deserve to be remembered as the best. He manages to be so silly and so entertaining, and yet also so deep and so real. Nowhere else is the sophistication of TSW’s writing on better display.

And when it was all done, like Kamala, my first and most-played character in The Secret World went back to the beginning, and I logged off for perhaps the last time within the Dojang.

I won’t say that this is definitely the last time I’ll play TSW. I haven’t uninstalled it, and I won’t rule out ducking in again if the mood strikes me or I’m given a good reason.

But I don’t have any firm plans to. There’s no point in continuing to upgrade my gear or hunt down lore. For now, it seems best to have made a clean break.

Obviously there was a lot of sadness around this farewell tour, but I also had a surprising amount of fun. It was really nice to revisit the game’s best moments, and I was reminded of all the little things that made me love TSW so much.

I was particularly struck by how even after nearly five years and being spoiled by Andromeda, this is still an incredibly good-looking game. They hit a very good formula with the art style where things are mostly realistic, but there’s just enough stylization to give it some flavour, to make it a little better than real.

I would definitely recommend doing something like this to anyone who’s upset about TSW’s fate. It’s very cathartic.

Perhaps I’m being fatalistic, but part of me is also starting to wonder if this isn’t for the best. Realistically, what are the odds TSW’s story was ever going to get a proper conclusion, or that said conclusion could ever satisfy the monstrously high expectations we’ve built up over the years?

As it is, content droughts aside, TSW leaves the world with an almost flawless track record. For several years it provided us with amazing experiences and set a new standard (at least in my mind) for what video games can achieve as an art form. We have been gifted with no shortage of great memories that will endure long after the servers go dark, from Nassir to Montag, Maine to the Dreaming Prison, rockabilly to Sleepless Lullaby. 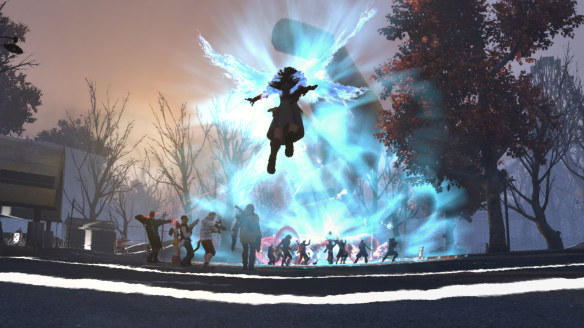 The Secret World may have died young, but it left a beautiful corpse.