Corporate war is looming. Based on knowledge gleaned from the alternate universe and the Seers, the Raza crew believes an upcoming corporate diplomatic conference will be attacked, sparking a conflict that will set fire to the entire galaxy. And they’re the only ones who can stop it.

With some convincing, they manage to gain access to the conference via their Mikkei allies, and the race is on to find the bomb.

Inspector Kierken of the Galactic Authority oversees the security for the conference, and he’ll jump at any chance to finally apprehend the Raza crew. Ferrous Corporation also has a strong presence on the station, and they’d love to get some payback on the crew for season one’s double-cross.

And then there’s Four. Or the man who used to be Four. Now emperor of Zairon and no longer any friend of the Raza crew, he has come to represent his planet’s interests at the conference.

This is Dark Matter, and it’s the season finale, so do I even need to say that things get really bad and really crazy really fast? I don’t think that’s even a spoiler; I think we all knew that pretty much everything was going to explode — figuratively, literally, or both.

As usual, the writers do a great job of keeping you guessing. It’s obvious something bad is going down, but it won’t be until pretty near the end you get a clear picture of just who is planning what.

It is, simply put, an absolutely excellent episode from beginning to end. As tense and exciting as you could possibly ask for a season finale.

My only complaint is very, very minor, and it’s that we’ve rounded out the season without learning the full origins of Sally the android. They’ve been building to it all season, but nothing’s come of it.

But otherwise “But First We Save the World” is yet another entry in the “this is why I love Dark Matter” file.

There’s a bit more I want to say, but it crosses into spoiler territory, so I’ll save it for the end of the post and label it clearly.

Now that season two is in the history books, I think it’s safe to say it was a significant improvement over season one — and season one was great. There was not a single bad episode in season two. Some were better than others, but overall the show has maintained an incredibly consistent quality level.

It’s actually been kind of frustrating for me as a reviewer because there’s only so many ways I can say, “Yeah, it’s pretty good.” I’m worried all my reviews are starting to sound the same because every episode is the just like the others. Fun, exciting, and keeping you guessing. 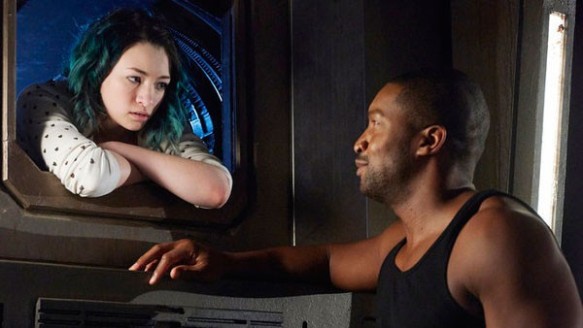 But I guess that’s what you call a good problem to have.

There’s good news, too: Dark Matter has already been renewed for a third season.

Seriously, spoilers here, stop now if you don’t want to read any.

I’m very curious what they’re going to do with him next season. This is a lot worse than Six’s betrayal at the end of season one. That was the wrong thing to do, but it was somewhat understandable. Even before season two started, I had a pretty good idea of why he did it, and it was hard to view him too harshly.

Four, though, has crossed the Rubicon. I don’t see how there can be any coming back from this. Six was a conflicted man who made one bad decision. Four — or I guess Ryo now — has crossed into full-blown supervillain territory. I don’t see how the crew can ever forgive him. I certainly can’t see myself as a viewer forgiving him.

I wouldn’t be surprised if he became a main villain for the third season. Longer term, if things go really bad for him, I could maybe see him killing himself in a last ditch effort to regain his honour. Especially if Nyx doesn’t make it.

On that note, I wouldn’t think they’d want to kill Nyx off so soon after introducing her, but then again, they did it to Devon.

I’m not sure what I want to see. I don’t want to see her go; I was just starting to really like her. But if Ryo ends up responsible for her death, however indirectly, that adds a whole other layer of emotional intensity to his story.

How long until season three?

1 thought on “Review: Dark Matter, “But First We Save the Galaxy” (Season Finale)”