It saddens me to no end that the RTS genre has fallen to the wayside as it has, so I try to snap up any decent-looking one I can find.

I’ll say upfront that this review focuses on the single-player campaign. I’ve heard it said that the multiplayer community for Grey Goo is virtually nonexistent, and I didn’t have much interest in playing it competitively anyway.

Grey Goo centers on the conflict between three races: a ragged group of alien refugees called the Beta, a hyper-advanced far future version of humans, and the titular all-consuming nanotechnology.

Interestingly, we first experience the game through the eyes of the Beta, not the humans. The Beta have spent generations fleeing across the stars to escape something called “the Silent Ones.” When hostile probes begin appearing on their world, they fear the Silent Ones have found them again, but the new threat is discovered to be something altogether alien to the Beta — though rather familiar to players.

And through it all is the rising danger of the Grey Goo, a ravenous breed of nanotechology consuming all in its path to attain some unknown goal.

Based on the setting and the trio of races, I had expected Grey Goo to be something of a StarCraft clone, but it turns out to play more like the old Dune or Command and Conquer games. I have since learned a lot of former Westwood people worked on Grey Goo, so that explains that.

It’s not my favourite style of RTS, but with the genre flagging as it is, beggars can’t be choosers, and it’s been so long since I played a game in this style that there was something pleasantly nostalgic about it.

There’s just one resource to gather, catalyst, and the races aren’t terribly distinct. Beta and humans play pretty much the same with only subtle differences.

The Goo are a bit different. Their units are still fairly similar to those of other races in a lot of cases, but there are more deviations (the Goo, for instance, cannot field air units), and their economy is completely different. There are no structures, only protean blobs of Goo that then transform into units.

Each race can also field epic units, which are akin to Age of Mythology’s Titans. They are very difficult to create, but nearly unstoppable once produced. Although Goo were my least favourite race to play, their epic unit, the Purger, was the most fun for me. Nanotech Cthulhu.

This is a rare case where I actually liked the humans best. An interesting twist is that in Grey Goo, humanity plays the role of the super advanced aliens, with the Beta technology being far more basic and rough around the edges. At one point a human dismisses the Beta as primitives by saying, “They’re still using bullets in their guns.” 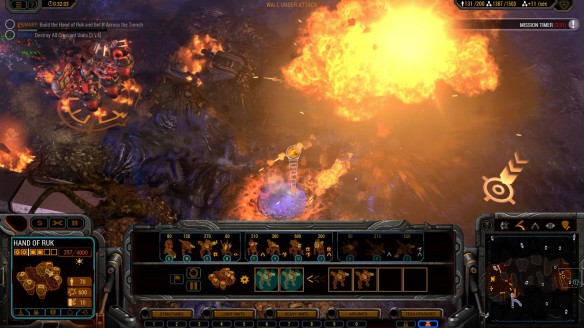 I mostly enjoyed the campaign, but it does suffer from two major flaws, which sort of feed off each other.

The first is that it’s very short. There are only five missions per race, and I was able to finish the entire campaign within ten hours.

As a result, it can also be quite rushed. There isn’t enough time to fully flesh out the characters or develop the story arcs.

The other issue is that this is one of those games that really throws you into the deep end and hopes you learn to swim. This is true of both the gameplay, as Grey Goo does offer a relatively steep learning curve, and the story, which throws you right into the middle and leaves you to try to figure out what’s going on. It took until midway through the final campaign for me to get a clear picture of Grey Goo’s backstory and what was really going on. This is undoubtedly the result of how small the campaign is.

There’s a DLC campaign, Emergence, to help flesh things out, but it’s quite brief, so while it does add some welcome insight into the events of the campaign, it doesn’t do much to help the game’s length issue. It’s also very difficult and thus somewhat frustrating. 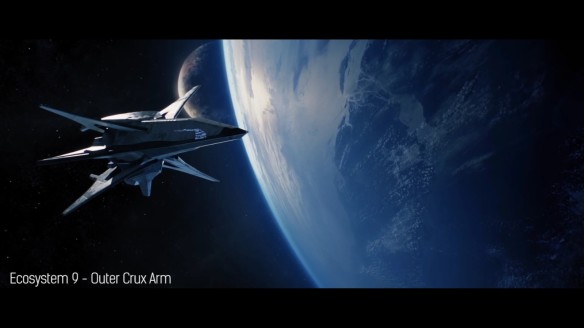 There are a few other hiccups, as well. The mission design is old school in the extreme, with nearly every mission being some variation of “go destroy the enemy base.” The difficulty is a bit oddly tuned, too, with some missions being fairly simple, but others, especially near the end, being incredibly frustrating even on the easiest difficulty setting.

That said, once you finally figure out what’s going on, the story of Grey Goo is pretty interesting, with some good twists and excellent use of its core sci-fi concepts.

This is definitely not the same style of sci-fi StarCraft is — IE just fantasy with space ships and guns — but a game that is serious about its science fiction. Grey Goo is about as close to hard sci-fi as I’ve yet seen in a video game. Which still isn’t that close, but still.

Putting aside the issues mentioned above, the storytelling is of a high quality. Cutscenes are frequent and spectacular, and the voice acting is very strong.

Despite some stumbles, I would like to see a sequel or expansion to Grey Goo. There’s a really interesting premise here, and the world needs more quality RTS games.

Also, because I can: 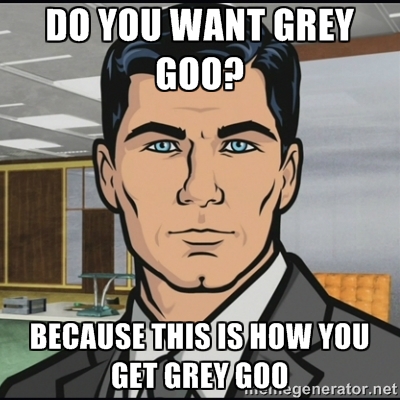 I’ve only ever seen one episode of Archer. The ants thing was the only part that made me laugh.