You know, I was starting to feel like my alt addiction was finally coming under control. I haven’t started a new character in WoW in ages. I’ve only bothered to gear up my rogue in this expansion. In months of playing Elder Scrolls Online, I’ve never even been tempted to start another character.

Yet Star Wars: The Old Republic has triggered a severe relapse. Blame the unique stories for each class, I guess.

I’ve been experimenting with Republic classes. Trooper won the poll from my last post, so I tried it first, but after playing it through the first planet, I wasn’t overly enamored with it.

So that left the Jedi classes. I decided to do what I did with the Sith and play them both to about level ten.

The initial knight storyline is just an incredibly straightforward “here are bad guys, go kill them” story. The consular’s has a certain degree of mystery to it. A lot of delving into lore and history and such.

I’ve also come to the conclusion I have a strong dislike for the male knight voice. Maybe I should have rolled female for that class.

Of course, I’d already experienced the mechanics of both classes while trying their Sith equivalents. I already knew I liked the knight/warrior mechanics. Yet something interesting happened with consular. A class that I disliked as a Sith was actually fairly fun as a Jedi.

I think a lot of it comes down to expectation. When I think Sith, I think unbridled fury. I want to wade into the fray and impose my will upon enemies. So when the inquisitor was more about force powers than lightsaber techniques, I was disappointed.

Yet Jedi are far more calm and spiritual. For them, it makes sense to focus more on mental disciplines.

Consular’s spells are also more based on telekinesis. Again, mechanically identical, but I find hurling giant rocks at people more interesting than the lightning powers of the Sith, which end up feeling like what you’d see from any mage class in any other MMO.

So not only do the consular’s force powers not bother me as they did with the inquisitor, I even ended up choosing the sub-class more focused on spellcasting.

I have been noticing for a while that — at least for me — role-play and head canon can make a big difference in how I play and what I enjoy in games.

For example, as a rule, I’m not fond of farming for resources or putting much effort into crafting. Yet I’ve been spending a lot of time doing just that in Elder Scrolls Online. Part of this is due to ESO making that a more rewarding activity in general, but a lot of it is down to the simple fact I play a Bosmer. It makes sense for a tribal hunter-gatherer to be living off the land and gathering and crafting her own supplies.

I noticed something similar in Dragon Age: Inquisition. Playing as a Dalish Keeper, I didn’t mind so much harvesting supplies from the wilderness. Again, it’s just what they do. Whereas on my Qunari, I really did view it as nothing but a chore.

I’m sure I could think of lots of other examples of RP altering my play preferences. I know it influences my zone choices in WoW. I wonder if anyone else finds this to be the case? It’s probably just me being weird again.

So, anyway, right now, it’s looking like my Republic main is going to be a Jedi sage. Right now I’m playing him mainly light side, though I don’t plan to be too rigid about it. I will definitely deviate from the Jedi Code from time to time, because there are some aspects of the Jedi philosophy that are just so powerfully stupid and wrong-headed I could never force myself to follow them.

My general thinking is he is a proper spiritually enlightened type. Taking a bit of inspiration from the Diablo crusader. He’s calm, wise, and compassionate, but still down to earth and approachable, with a good sense of humour — I like taking snarky conversation options where possible.

Meanwhile, I also decided to go back to the inquisitor long enough to finish Korriban — mainly for the payout of Cartel Coins, paltry though it may be — and now I’m wondering if maybe I do want to play it after all, despite my previously deciding to focus on the warrior.

I still wish for more lightsaber-focused abilities, but maybe what I have is enough. And I really like both the story and the voice acting for the inquisitor. Warrior story and voice acting are decent so far, but inquisitor really grabs me.

As an aside, I realize this is somewhat subjective, but it seems to me like the first companion for almost every class, well, sucks. I’ve played six classes far enough to get a companion, and of them all, Vette is the only initial companion I like. Qyzen and Khem are bland one-note characters, Kaliyo is an unrepentant psychopath, Aric is just a prick, and the first Jedi knight companion is an appliance.

Companions are also my only major reservation about choosing consular over knight, because I know knight gets Jaina Proudmoore as a companion later on. 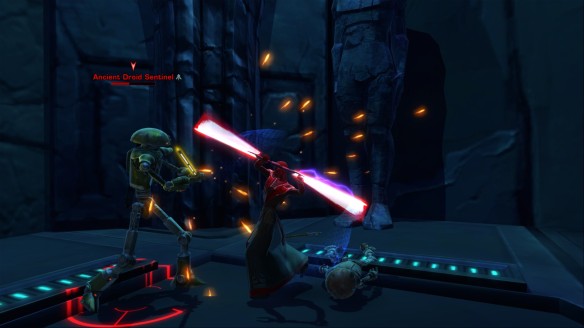 (Yeah, I know her name is Laura Bailey, but she’ll always be Jaina to me.)

Agh, I’m so confused. I want to play everything!

In other news, I have just started on a new game writing gig. From here on in, I’ll be contributing regular content to the newly launched site MMOBro. My first contribution is Six MMOs to Watch in 2016. From fresh titles to older games with exciting new developments.